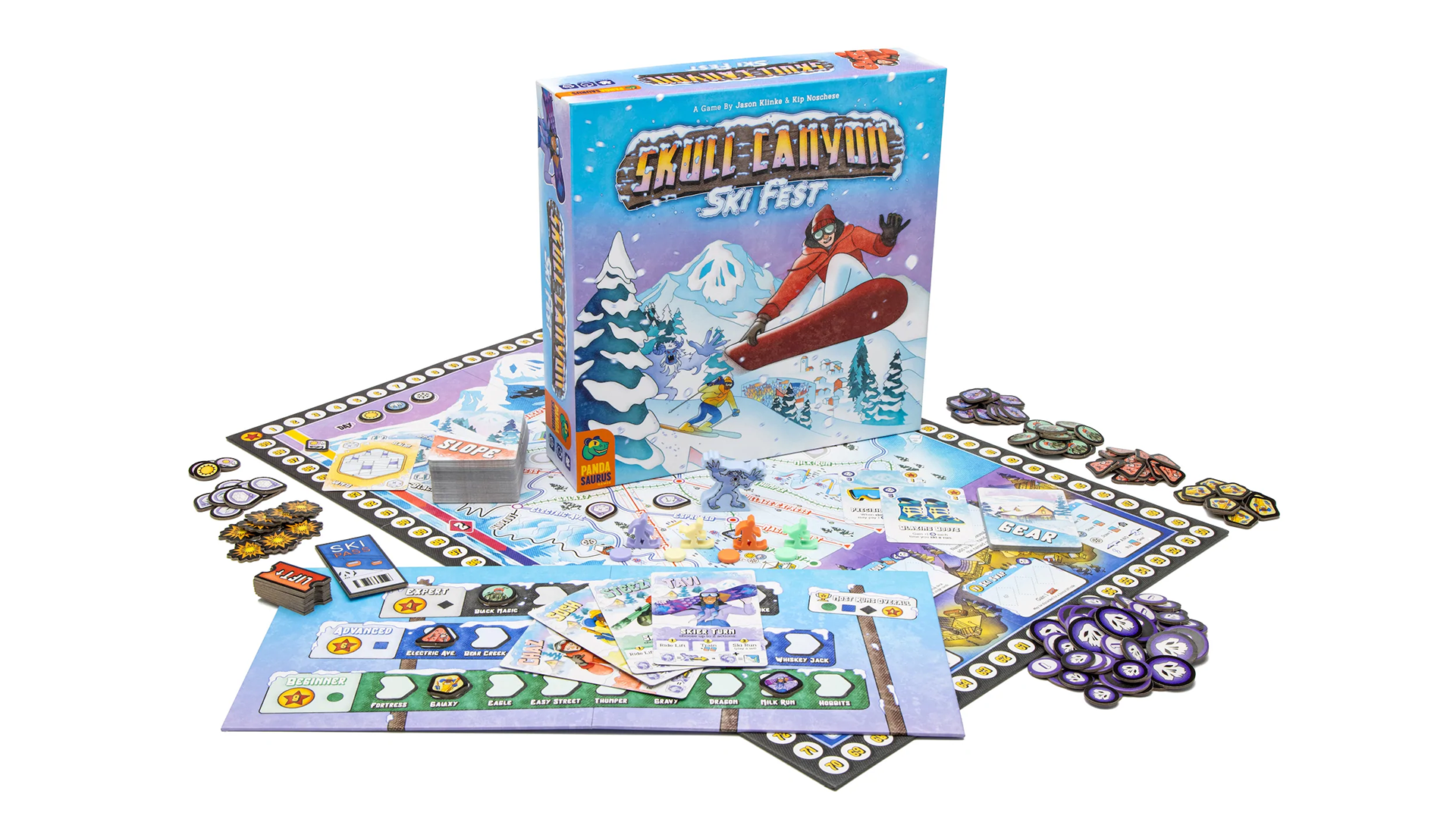 We had the chance to check out Skull Canyon: Ski Fest.

What is Skull Canyon: Ski Fest? What’s this game about?

Skull Canyon: Ski Fest is a strategy tabletop game for 2-4 players with a recommended age of 14. The game takes players to a ski resort, where they’ll be challenged to complete runs down the mountain in order to earn fame and points. Along the way, players will need to watch out for the yeti who lives on the mountain.

Skull Canyon: Ski Fest takes place over three rounds, or in-game days. The first two days are split into two phases: Skiing and Aprés-Ski, while the final day only has the Skiing phase.

During the Skiing phase, players will take turns moving their skier around the mountain and completing runs. In order to complete a run, players will need to play a set of Slope cards that all have the same color or “style,” such as “Slopestyle” or “Ski Cross.” Each run has one of three difficulty levels: Easy, Advanced, or Expert, and the difficulty will determine the number of cards players need to play to complete the run.

(If your family has played games like Ticket to Ride, the Skiing phase in Skull Canyon: Ski Fest may feel familiar, since Ticket to Ride also relies on playing matching sets of cards to claim routes on maps.)

In addition to normal Slope cards, the game features Yeti cards that can serve as wild cards of any color or style. When one Yeti card is used to complete a run, the player who completed the run must move the game’s Yeti figure to a run to prevent players from completing it until the Yeti moves again. If two or more Yeti cards are used to complete a run, an avalanche is triggered on the mountain, which will cause players to move backwards down the mountain. Players may be able to use an avalanche to their advantage to prevent other players from completing high-scoring runs.

Once the Skiing phase is over, players will move to the Ski Village at the bottom of the game board where they can complete the Aprés-Ski phase. During this phase, players have the option to visit a series of locations in the Ski Village in order to collect new cards, special tokens that can help them on future days, and more. Players may need to discard cards and/or spend fame tokens to interact with these locations, so they can strategically decide which location(s) they want to visit and which they want to pass by.

At the end of the Aprés-Ski phase, players will have the option to spend fame tokens to purchase a piece of gear that can give them an advantage during the rest of the game.

If players decide to hold onto the fame tokens they collect, they’ll receive one point for every three fame they have left at the end of the game. This means players can use strategic thinking to decide how and when to spend their fame throughout the game.

Once the final round is over, the points are totaled and the player with the most points wins.

We enjoyed Skull Canyon: Ski Fest. The game gives players lots of freedom to think ahead and plan their moves strategically before taking actions, but the experience isn’t so complex as to become overwhelming.

In addition, parents should know that Skull Canyon: Ski Fest requires a large gameplay area. The game's components technically fit on a standard card table, but it’s a tight squeeze, so we recommend playing on a larger surface, like a dining table.

Skull Canyon: Ski Fest is a fun tabletop game that does a nice job of encouraging players to think strategically on each turn.

If your family enjoys games like Ticket to Ride and you’re interested in trying something a bit more complicated, Skull Canyon: Ski Fest may be a good place to start.

Skull Canyon: Ski Fest is now available for $39.95. The game can be purchased on the Pandasaurus Games website and at other retailers.