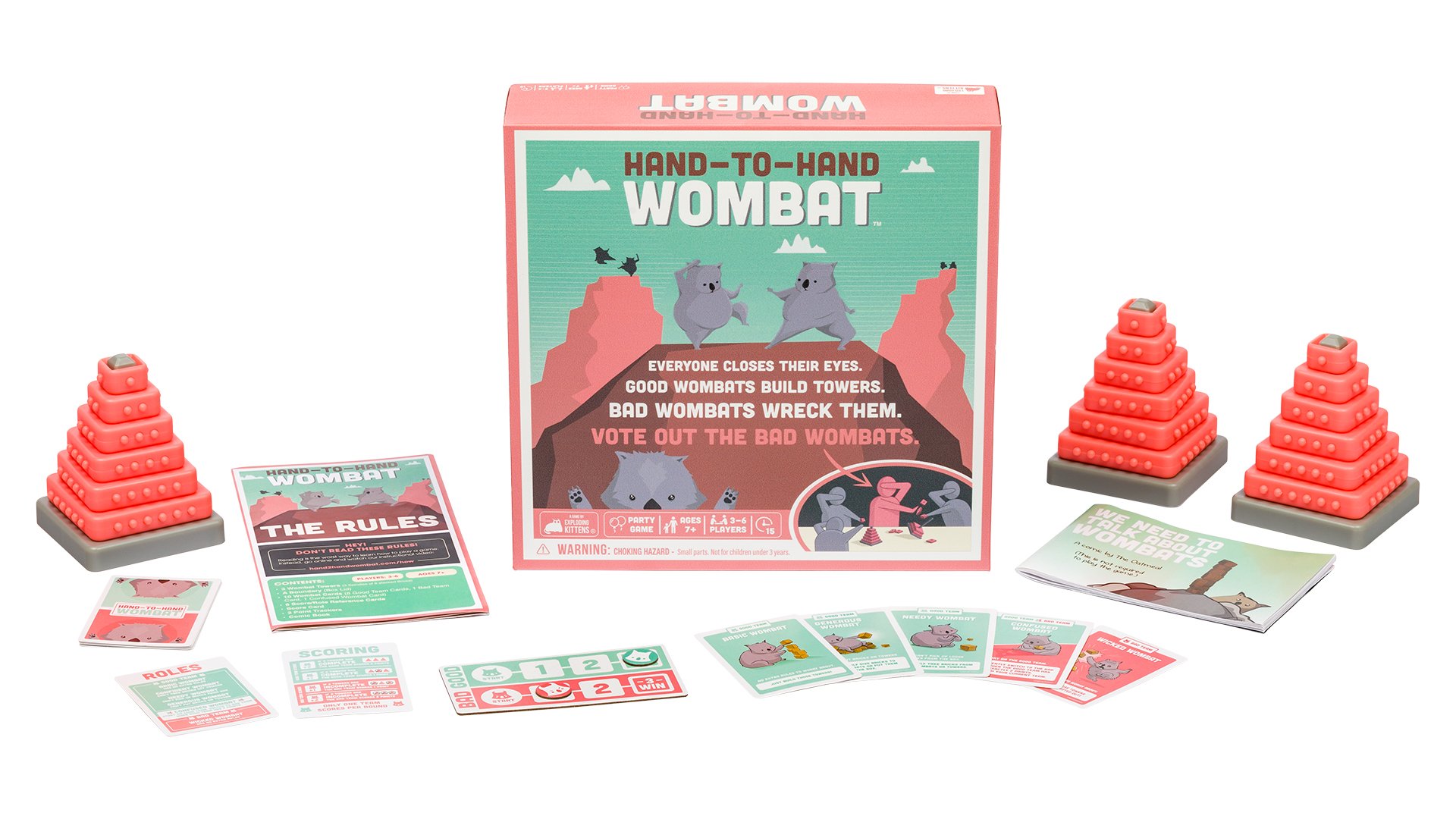 Exploding Kittens, the company behind games like A Game of Cat & Mouth and Mantis, released Hand-to-Hand Wombat, a party game that allows players to become wombats and challenges them to build towers using plastic building pieces while they have their eyes closed.

Hand-to-Hand Wombat is a party game for 3-6 players with a recommended age of 7+. Before the game begins, each player will draw a card that will tell them if they’ll be playing as a “good” or “bad” wombat. Good wombats will work together to try to build three towers in the lid of the game box during each round, while bad wombats will try to prevent the good wombats from building the towers without letting anyone know they’re a “bad” wombat. In addition, some “good” wombat cards have a special rule that those specific players will be required to follow throughout the game. Players will keep their roles a secret until the game is over.

Each round lasts for 90 seconds. Players will need to keep track of the time using a smartphone or other device that can make noise once the 90 seconds are over. During each round, every player closes their eyes and covers their eyes with one hand. They can use their other hand to pick up the building pieces in the play area and work to build or destroy the three towers.

Each tower is designed to have six square building pieces with the largest piece at the bottom and the smallest piece at the top to form a pyramid. Each piece has raised dots on the side that match the position they should have in the final tower. For instance, a piece that should be fifth from the top has five raised dots on each side. These dots can help players determine which pieces they’re holding while their eyes are closed.

Players are allowed to communicate as much as they want during each round, but they can’t open their eyes until the 90 seconds have elapsed. Once a round is over, 1-2 points will be awarded to either the “Good Team” or the “Bad Team,” depending on how many towers were successfully built. If neither team has earned three points after a round is over, the group will move onto the voting stage.

“IF THE BAD TEAM IS OUT, THE GAME ISN'T OVER!

Just because the Bad Team was voted out doesn’t mean they can’t win. Continue playing as normal through Building, Scoring, and Voting. The Good Team doesn’t know they’re the only ones left and might clash enough that the Bad Team still earns points and wins!”

Once the voting stage is over, the building pieces are removed from the towers and the next round can begin. Once either team reaches three points, they win the game. Each game of Hand-to-Hand Wombat has an expected play time of 15 minutes.

Finally, it’s worth pointing out that Hand-to-Hand Wombat includes the comic “We Need to Talk About Wombats” from artist Matthew Inman, who is also known as The Oatmeal. Inman is co-founder of Exploding Kittens. The comic includes toilet humor and provides details about how wombats kill their enemies.

Players aren’t required to read the comic before playing the game. If you’re concerned about the comic’s content, you can read the digital version of the comic right here (the online version is called “We need to have a conversation about wombats”). This will allow you to see what’s inside the comic before you purchase Hand-to-Hand Wombat.

Hand-to-Hand Wombat is now available at Amazon, Target, and Walmart for $25.99 (the game is currently priced at $24.86 at Walmart).