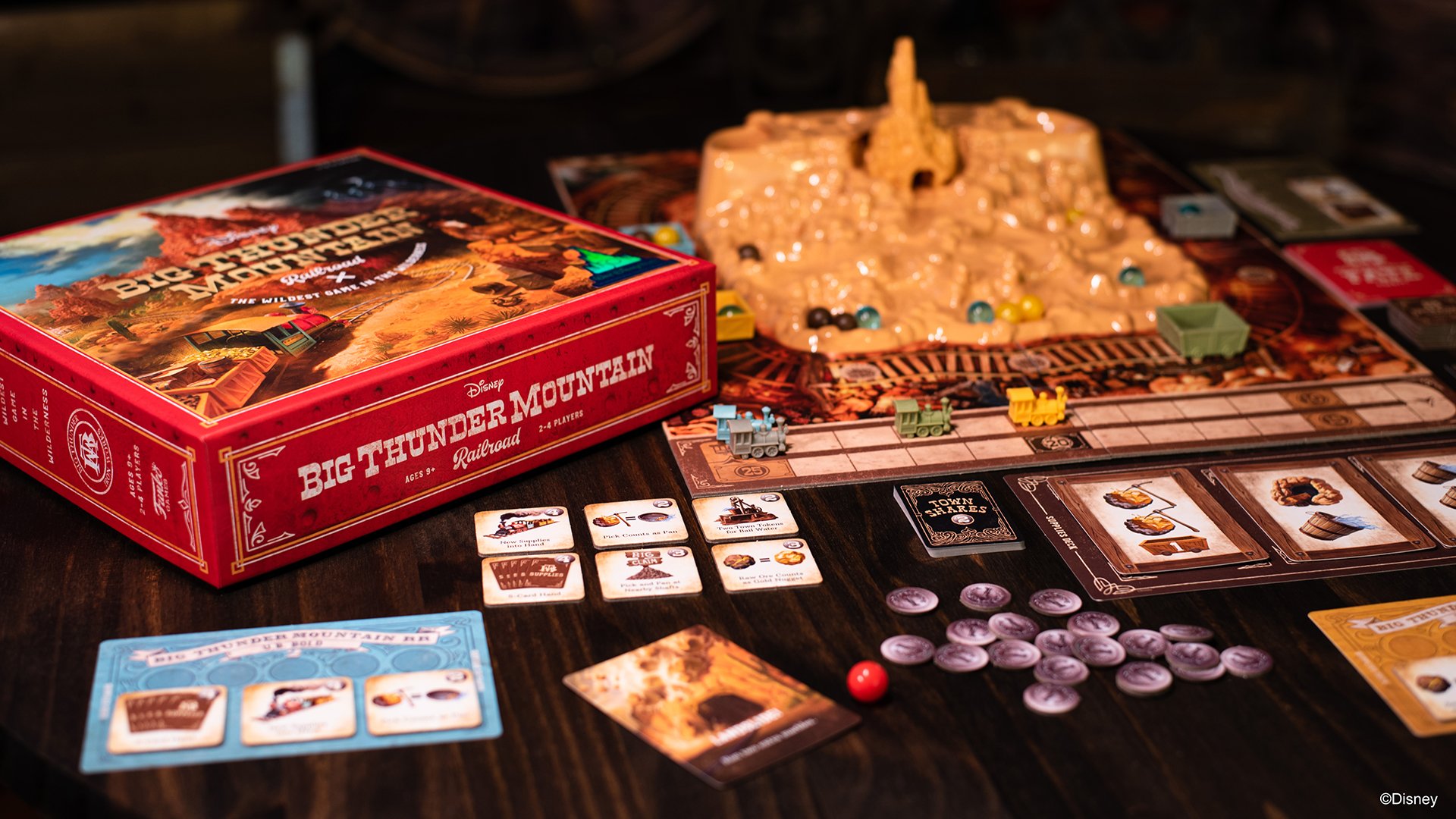 We had the chance to try Disney Big Thunder Mountain Railroad.

Each game of Disney Big Thunder Mountain Railroad has an expected play time of 45 minutes.

In Disney Big Thunder Mountain Railroad, a plastic model of the mountain and its mine shafts sits in the center of the game board. A series of colorful marbles is placed in a tray at the top of the plastic model, and a piece representing the “mountain peak” is placed at the opening of this tray. On each turn, players will turn the mountain peak in circles to free marbles from the tray, allowing them to run down grooves, or trenches, on the plastic model until they come to rest in one of seven mine shafts.

Each player has their own deck of Supplies Cards that they can use to move their minecart around the mountain and perform actions in mine shafts. Players will be required to use different Supplies Cards to remove the water, gold, and/or raw ore from the shafts, depending on the marbles that are in each shaft at any one time.

Specifically, players can use a Pick to collect one gold or brown marble (one piece of gold or raw ore) from a mineshaft so long as no water (one or more blue marbles) is also in the shaft. If water is in a shaft, players can use a Pan to pan for the gold or raw ore instead. Or, they can use a bucket to remove a blue marble (the water) from the mine shaft entirely (it’s possible for a mine shaft to have more than one blue marble, and a single bucket can only remove one blue  marble when it’s used).

Other Supplies Cards will allow players to move to different spots on the game board or collect additional Supplies Cards from a selection in the center of the table.

Players can use more than one Supplies Card on a single turn, which means they can use strategic thinking to play their cards in the best order to make each turn as efficient and profitable as possible.

Players can hold up to four marbles (pieces of gold or raw ore) in their minecart at one time. Each time they make their way back to town (the top of the game board), they can sell the items they’ve collected for currency or points.

This choice adds another element of strategy to the game. On the one hand, players may want to collect currency since they can spend it on upgrades that can give them an advantage, as well as on cards containing bonus points that they’ll receive at the end of the game. On the other hand, the player who has the most points at the end of the game will win, so players may want to skip collecting currency and go for points instead. (Players can also earn currency by removing water from a mine shaft.)

The game will continue until the first player reaches 20 points. Once this happens, every player receives one final turn and their scores are totaled. The player with the most points wins.

We enjoyed Disney Big Thunder Mountain Railroad. There are a variety of factors to keep track of when it comes to removing water, gold, or ore from a mine shaft, but the game isn’t so complicated as to feel overwhelming.

We appreciate how much freedom the game gives players on their turns. Since players can play multiple cards on a single turn, and play those cards in whatever order they’d like, they’re encouraged to think strategically to make the most of each trip around the mountain.

That being said, we have some concerns about the plastic model of the mountain. The plastic is quite thin and the piece we received doesn’t sit totally flat on the table. We found the marbles tended to roll to one side of the mountain, rather than being distributed “at random” as the game was designed. Eventually, we began helping the marbles roll to other areas to switch things up.

Disney Big Thunder Mountain Railroad is a clever tabletop game that does a nice job of encouraging players to think strategically. We’re disappointed by the quality of the plastic mountain, but we were able to overcome this issue by helping the marbles move more randomly on our own. Even with this issue, we still enjoyed the experience.