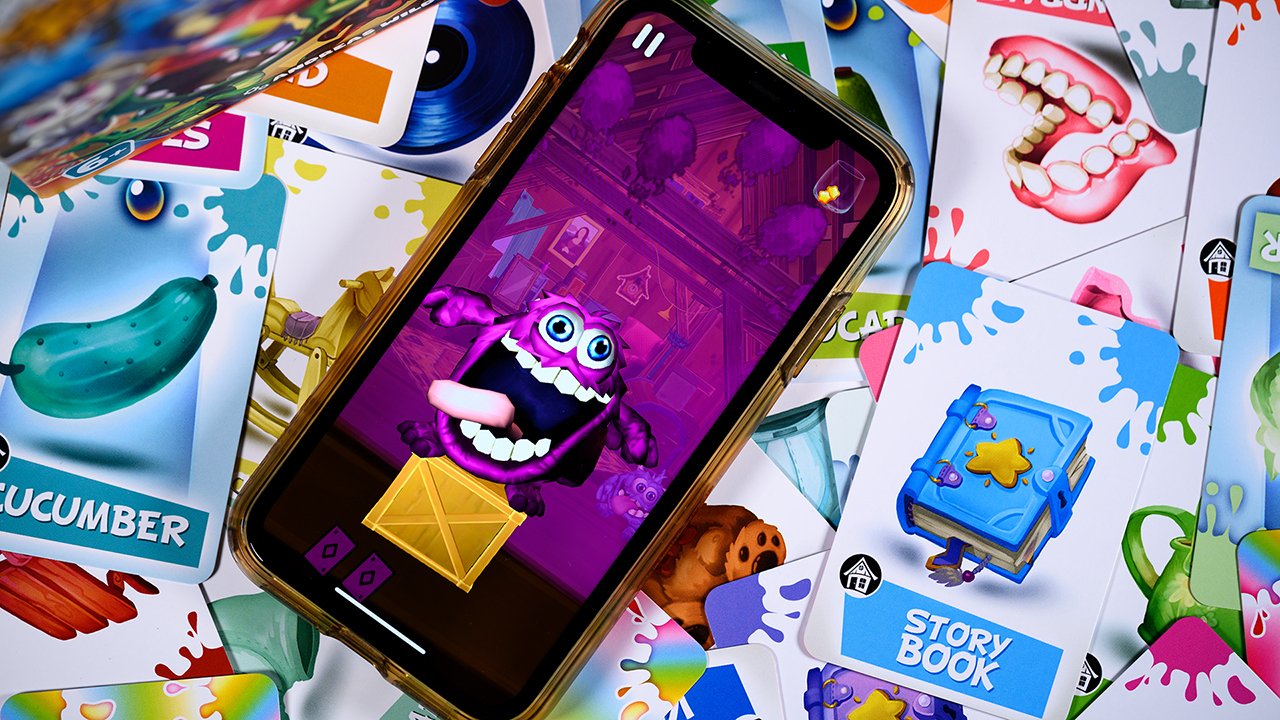 We recently had the chance to check out Yummy Yummy Monster Tummy, a tabletop game from Lucky Duck Games, the company behind titles like Chronicles of Crime and It’s a Wonderful World.

What is Yummy Yummy Monster Tummy? What’s this game about?

Yummy Yummy Monster Tummy is a cooperative tabletop game for 2-4 players with a recommended age of 6+. The game combines the use of real-world cards with a mobile application that’s free to download on iOS and Android devices.

In Yummy Yummy Monster Tummy, players will need to feed friendly monsters a random assortment of items in different colors. Players will be challenged to feed each monster items that closely match the color of the monster’s fur.

Each game of Yummy Yummy Monster Tummy has an expected play time of 20 minutes, though this could vary greatly, since families can decide when they want to stop playing.

The Yummy Yummy Monster Tummy box includes 96 Item Cards that are split into four location decks: Grandpa’s Attic, the Forest, the Scrapyard, and the Museum. These Item Cards feature a random assortment of objects in a wide variety of colors, including multiple shades of the same color. For example, one card may have an object that’s a navy blue color, while another card has an object with a pastel blue color, and so on.

Outside of these Item Cards and a paper instruction booklet, the rest of the game is found in the free application families can download on iOS and Android devices.

The application allows groups to choose from two gameplay modes: Story Mode and Party Mode. The Story Mode will teach players how to play the game if they’d rather not read the paper instruction sheet, while the Party Mode will allow families to play a level of the game without the Story Mode features.

The Story Mode will guide players around a virtual town, starting in Grandpa’s Attic before progressing to the Forest and so on. Each area has three levels to complete, and the group will earn up to three stars on each level, depending on their performance.

In each level, a series of hungry monsters and other creatures will appear on the screen in front of players. Each player will need to “feed” one Item Card to each monster / creature. Players can feed monsters by holding an Item Card face up above the device’s camera so that the camera can “read” the QR code printed on the back of the Item Card. This will cause the item to appear in the game so the monster can eat it.

Once each player has fed a monster, the monster will belch and the colors of the items players selected will be combined, causing the monster’s fur to turn the resulting color. Players will then earn up to three stars for that monster, based on how closely the monster’s final color matched its original color.

As an example, if a dark blue monster appears on the screen, players would want to play Item Cards that were as close to this dark blue color as possible. Or, if no one has a dark blue Item Card, players could work together to play Item Cards in different colors so that – when the colors are mixed together – they would result in a dark shade of blue (or a shade that’s as close as possible to the goal color). Players are allowed to talk about the cards they have in their hands and the cards they should play, but they aren’t allowed to show their specific cards to their teammates before playing them.

In addition to normal Item Cards, the game includes a few Item Cards with special abilities. For instance, players can feed monsters “Candy” Item Cards that serve as wild cards and will perfectly match the monster’s fur color. There are also “Vitamin” Item Cards that players will only want to feed monsters as a last resort, since monsters hate vitamins. If someone feeds a monster a “Vitamin” Item Card, a cooldown timer will appear on the side of the screen, and players will need to avoid feeding any additional Vitamin cards to monsters until this timer disappears.

Yummy Yummy Monster Tummy has three difficulty levels to choose from, which will determine how closely players will need to match each monster’s fur color while playing. That is, in the game’s Easy Mode, players are allowed to be “further away” from a monster’s desired color without failing a level, and vice versa.

Finally, some special creatures will appear as players make their way through stages. As a couple of examples, Rabbits will appear who only want to be fed Vitamin Item Cards, and silent monsters will appear that players must feed without talking.

While Yummy Yummy Monster Tummy has an expected play time of 20 minutes, the game has a loose “end” point, meaning players can play the game for as long as they’d like. Players can replay the 12 levels in Story Mode once they’ve completed them, and they can play an infinite number of rounds in Party Mode until they’d like to quit playing.

Yummy Yummy Monster Tummy is an adorable tabletop game that’s really fun to play. Plus, while the game’s premise is simple, the experience encourages communication, and can help players practice their color matching and color mixing.

The game also offers a decent level of challenge, based on the cards players currently have in their hands and how well the group can predict the resulting color before cards of specific colors are played.

While Yummy Yummy Monster Tummy is played using a mobile application, the game doesn’t require the device to be connected to the internet to play the game.

We played Yummy Yummy Monster Tummy on an iPad Pro and an iPhone 12 Pro Max and had no trouble scanning cards on either device. However, the experience will likely be more enjoyable when playing on a device with a larger screen, since it will be easier for everyone around the table to see what’s happening as cards are played.

We loved Yummy Yummy Monster Tummy. The game features adorable artwork and clever gameplay that can challenge even older players without feeling overwhelming or frustrating.

We highly recommend adding this game to your family’s collection.

Yummy Yummy Monster Tummy is available for $19.99 on the Lucky Duck Games website and at other retailers.

Editor's note (08/26/2022): This review has been updated with the correct model of the iPhone device used to play the game.