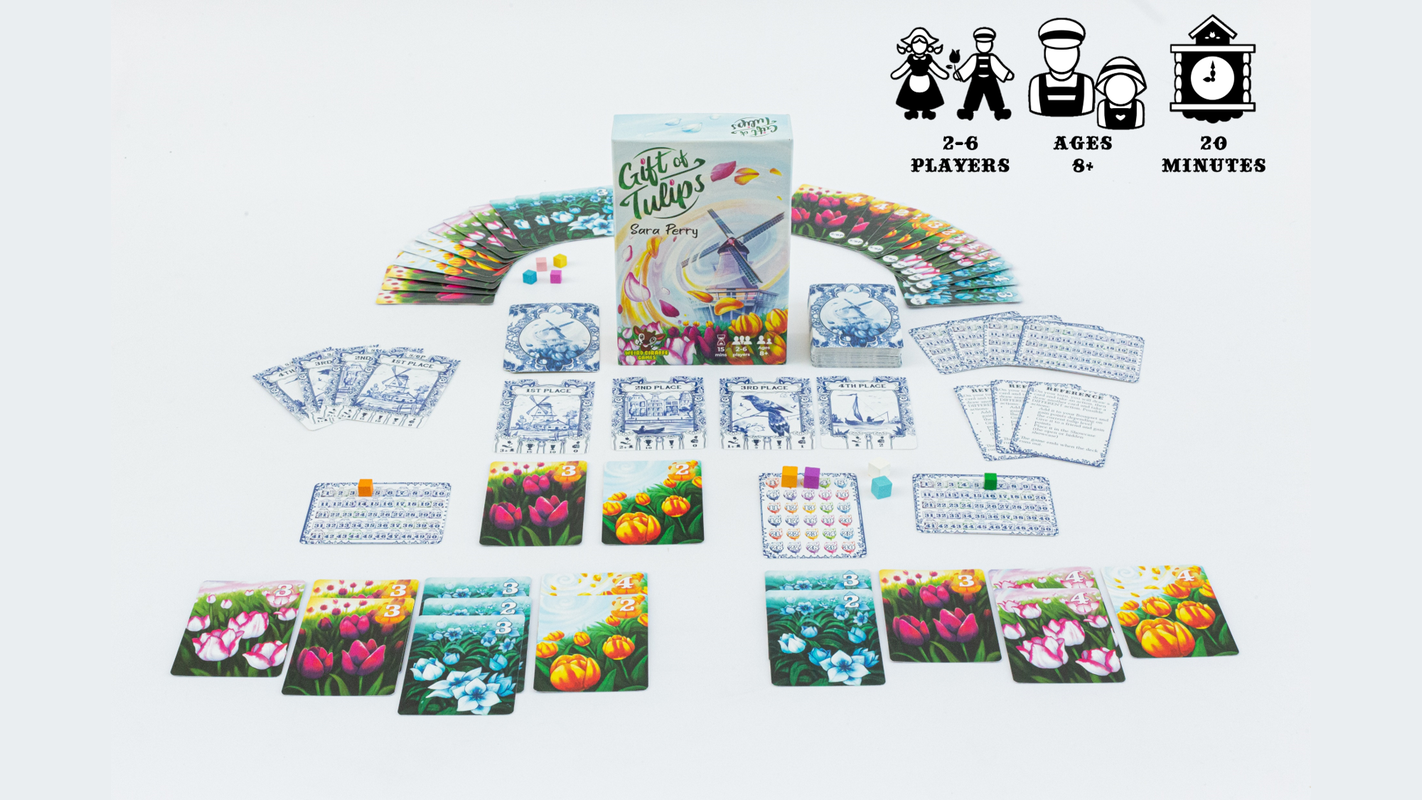 We had the chance to check out Gift of Tulips.

What is Gift of Tulips? What is this game about?

Gift of Tulips is a family-friendly card game for 2-6 players with a recommended age of 8+. The game is inspired by Amsterdam’s Tulip Festival, and will challenge players to earn as many points as possible by collecting, gifting, and playing Tulip Cards.

Each game of Gift of Tulips has an expected play time of 20 minutes.

Gift of Tulips features beautiful Tulip Cards in four varieties. For ease, we’ll call these varieties “purple,” “blue,” “pink,” and “orange,” though the game does provide information about the real tulips that inspired the cards. Throughout each game, players will work to earn as many points as possible by adding tulips to the bouquet in front of them, giving tulips to other players, and / or adding tulips to the Festival in the center of the gameplay area.

Once players play their first Tulip Card, they’ll need to draw a second Tulip Card from the deck and complete a different action. That is, they can’t complete the same action twice on their turn.

The Festival area has four “places,” or ranking positions, with the most valuable tulip at any one time being in “1st Place,” the second-most valuable tulip being in “2nd Place,” and so on. The value of each tulip variety can change as the game progresses based on players’ actions, which helps encourage players to think strategically as they decide which action to take with each Tulip Card on their turn.

On each turn, players may instantly earn points for keeping tulips for themselves or giving tulips away, depending on the current ranking position of the associated tulip in the Festival. At the end of the game, players can earn additional points based on the final value of each tulip variety and the number of matching Tulip Cards they’ve accumulated in their bouquet. The player with the most points at the end of the game wins.

Gift of Tulips has lots of different factors to keep track of in terms of the actions you can take on each turn and the different ways you can earn points. We found the game takes some time to learn and teach to new players, but once your family understands the rules, the experience takes on a fun, casual flow.

In addition, while the game encourages players to think strategically before taking each action, the gameplay is still simple enough that players can have a conversation while playing, which we really appreciate.

Gift of Tulips contains some very small components that are used to keep track of each player’s score and the current value of each tulip variety. In between games, these components can be stored in two small, plastic bags that are included with the game. While Gift of Tulips isn’t designed for young children (the game has an age rating of 8+), families should take care to prevent littles from getting ahold of these pieces, as they can easily be lost and may pose a choking hazard.

Gift of Tulips is a beautiful and fun card game. While it may take a moment for players to understand the rules and teach the game to new players, the end experience offers a nice combination of strategic and casual gameplay.

We recommend checking this one out.

Gift of Tulips can be purchased on the Weird Giraffe Games website for $19.

Disclosure: SuperParent received a copy of Gift of Tulips for coverage purposes.