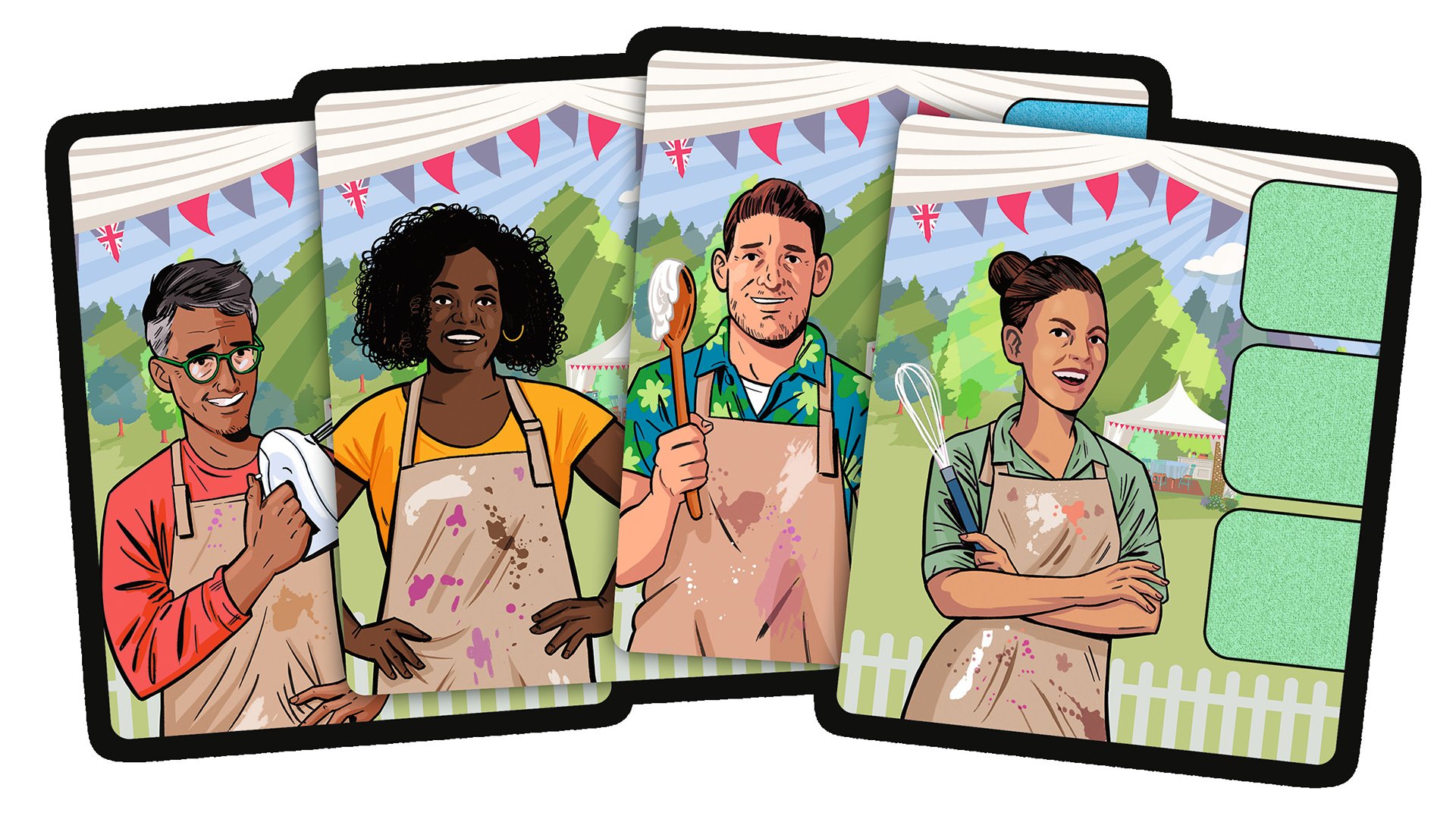 We had the chance to try The Great British Baking Show Game.

Each game of The Great British Baking Show Game has an expected play time of 20 minutes.

The Great British Baking Show Game is split into three rounds: Signature, Technical, and Showstopper. Each round will challenge players to complete a recipe shown on a Recipe Card, and these recipes will become more complex from round to round. Every player will work on the same recipe during each round.

The game’s Recipe Cards feature food items in multiple categories, such as “Cake,” “Biscuits,” and “International.” There are 18 Recipe Cards in total, which means groups can play the game multiple times without creating the same recipe more than once. Each finished recipe will consist of a variety of Bake Cards that players must arrange in a particular fashion in front of them.

Each player receives their own deck of Bake Cards that they’ll use to prepare their recipes. Once a round begins, all players will begin flipping over cards simultaneously, and they’ll be encouraged to be the first one to successfully complete their recipe. The game features a variety of different Bake Cards, and players will need to play the right kinds of cards to the table in front of them to create a dish that matches the layout on the Recipe Card.

For instance, the “Lava Cake” recipe must be created using seven “Mixture” Bake Cards and a single “Filling” Bake Card, while the “Iced Buns” recipe must be created using an assortment of Mixture, Rye, Filling, and Icing Bake Cards. There are multiple kinds of cards that qualify as “Mixture” Bake Cards, as well as multiple kinds of cards that qualify as “Filling” Bake Cards. The specific cards players use will affect the quality of their final dish and the points they’ll earn at the end of the round.

Each round will continue until all but one player has finished completing their recipe. The faster players complete each round, the more points they’ll receive for their “speed.” Players will also receive points based on the quality of their dish.

There are three possible scores for each recipe. If a player simply completes a dish, they’ll receive the base number of points for that recipe (two points). However, if they can complete a recipe while matching the recipe’s specific requirements, they can earn up to seven points for the dish instead. These requirements may ask players to create a recipe without using a specific kind of Filling Bake Card, create a recipe without using a “Soggy” Mixture Bake Card, and so on.

While The Great British Baking Show Game focuses heavily on the luck of the draw (since players won’t know which Bake Card they’ll turn over next), this scoring mechanic adds some light strategy to the experience. That is, players must decide whether they’d like to finish a recipe as quickly as possible to earn bonus points for speed, or whether they’d like to take more time to create a higher quality recipe in the hopes of earning more quality points at the end of the round.

Finally, it’s worth pointing out that players have a “Bin” Token they can use once per round to “throw away” any Bake Cards in their dish that they don’t want to have in their final recipe. For instance, if someone decides to use “Soggy” Mixture Bake Cards as they create their dish for the sake of finishing the recipe quickly, and they later come across higher quality Mixture Bake Cards, they could use their Bin Token to discard the Soggy Mixture Bake Cards and replace them with the better cards. This feature adds a bit more strategy to the game.

The game ends after the third round. At that point, players add up the number of points they’ve earned throughout the “show” and the player with the most points is named Star Baker.

We enjoyed The Great British Baking Show Game. The game may appear overwhelming at first glance, given the variety of Bake Cards players need to keep track of and the complexity of some of the recipes, but the rules are easy to understand.

That being said, the game’s fast-paced gameplay won’t be for everyone. We also agree with the game’s 10+ age rating, as younger children may become frustrated by the game’s focus on speed.

The Great British Baking Show Game does a nice job of capturing the feeling of the television show, but players don’t have to be fans of the show to play the game. The fast-paced gameplay may turn some players off, but if you enjoy games that are focused more on speed and luck than strategy, you may want to check this one out.

The Great British Baking Show Game is now available for $24.99.