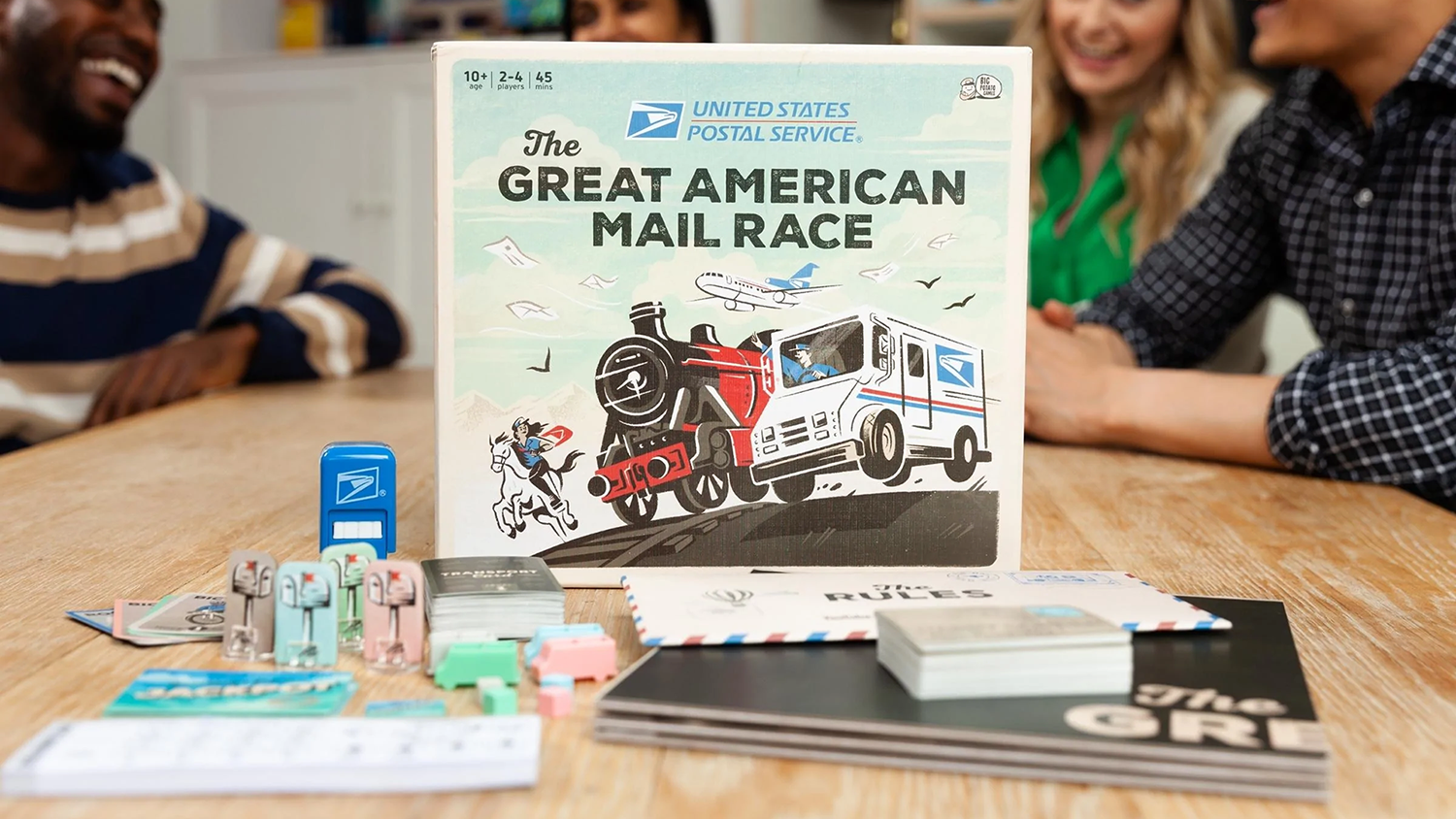 We had the chance to try USPS: The Great American Mail Race.

USPS: The Great American Mail Race is a family-friendly tabletop game for 2-4-players with a recommended age of 10+. The game allows players to become new employees of the United States Postal Service with the goal of picking up and delivering mail across the country to earn as many points as possible before the game ends.

Each game of USPS: The Great American Mail Race has an expected play time of 45 minutes.

USPS: The Great American Mail Race gives each player a Delivery Truck and asks them to play Transport Cards to move their truck across a map of the U.S. to pick up letters and parcels and deliver them to the correct destinations.

The game’s Transport Cards feature modes of transportation that have been used by the USPS throughout history and in the modern day to deliver mail. This includes things like mules, planes, steam boats, and hot air balloons, among others. Each Transport Card allows players to move their Delivery Truck across the map in a particular way. For instance, plane cards allow players to instantly fly from one airport space to another, while mule cards can be used to travel on trail paths on the map, rather than road paths.

The map has four mail depots, with one being in each region of the country (West, Midwest, South, and Northeast). The game also includes four decks of Delivery Cards, with one deck corresponding to each of these regions. At the beginning of the game, one Delivery Card (that is, one letter or parcel) will be available to collect at each depot on the map. Players will need to travel to one of these depots to collect its Delivery Card, and then deliver the mail to the destination listed on the card. As deliveries are made, new letters or parcels will become available at the depots, and the cycle will continue.

Players can work on up to two deliveries at the same time. As players successfully deliver letters and parcels, they’ll earn points based on the number of letters and parcels they’ve delivered in total, the regions their deliveries originated from, and more. Players can earn bonus points by collecting a letter or parcel and delivering it on the same turn, and by delivering parcels marked with a “Fragile” symbol without using any “air” Transport Cards (such as plane cards). Finally, postcards can be found around the map and players can earn even more bonus points by collecting these postcards (they don’t have to deliver the postcards to any other destinations).

Finally, players can interact with other players as they make their way around the map. When a player encounters another player’s Delivery Truck on the map, they have the option to “steal” a delivery the other player is working on, or give one of their own deliveries to the other player in an attempt to trip them up.

This gameplay of collecting letters and parcels from depots and delivering them around the map will continue until the deck of Transport Cards runs out. At that point, players will total the number of points they’ve earned and the player with the most points wins.

We enjoyed USPS: The Great American Mail Race. While the game has lots of elements to keep track of, the rules aren’t overly complicated, and it’s fun to work out the best path to take around the map on each turn. We also really enjoy the novelty of using a real stamp to keep track of scores.

That being said, we do have a slight complaint about the game’s visual design. The game’s color palette consists of pastel shades of blue, green, and red, as well as gray. Depending on your lighting and shadow conditions, some of the game’s blue and green components can appear very similar in color, and we found it’s possible to get them mixed up while playing.

The game’s stamp doesn’t come pre-inked. Instead, a small tube of ink is included with the game and players will need to load the stamp with ink themselves. If you’re not careful during this process, the ink may make a mess, and we found it does stain skin (presumably, it would also stain other surfaces).

In addition, we recommend families keep one of the game's paper Delivery Slips blank, so that it can be used to create more if the pad of Delivery Slips included with the game ever runs out.

USPS: The Great American Mail Race is a fun tabletop game that does a nice job of engaging the player’s forward-thinking and problem-solving skills without being overwhelming.

If you’re looking for a game that bridges the gap between being super casual and overly complicated, this is a nice option to consider.

USPS: The Great American Mail Race is now available at Target for $34.99.