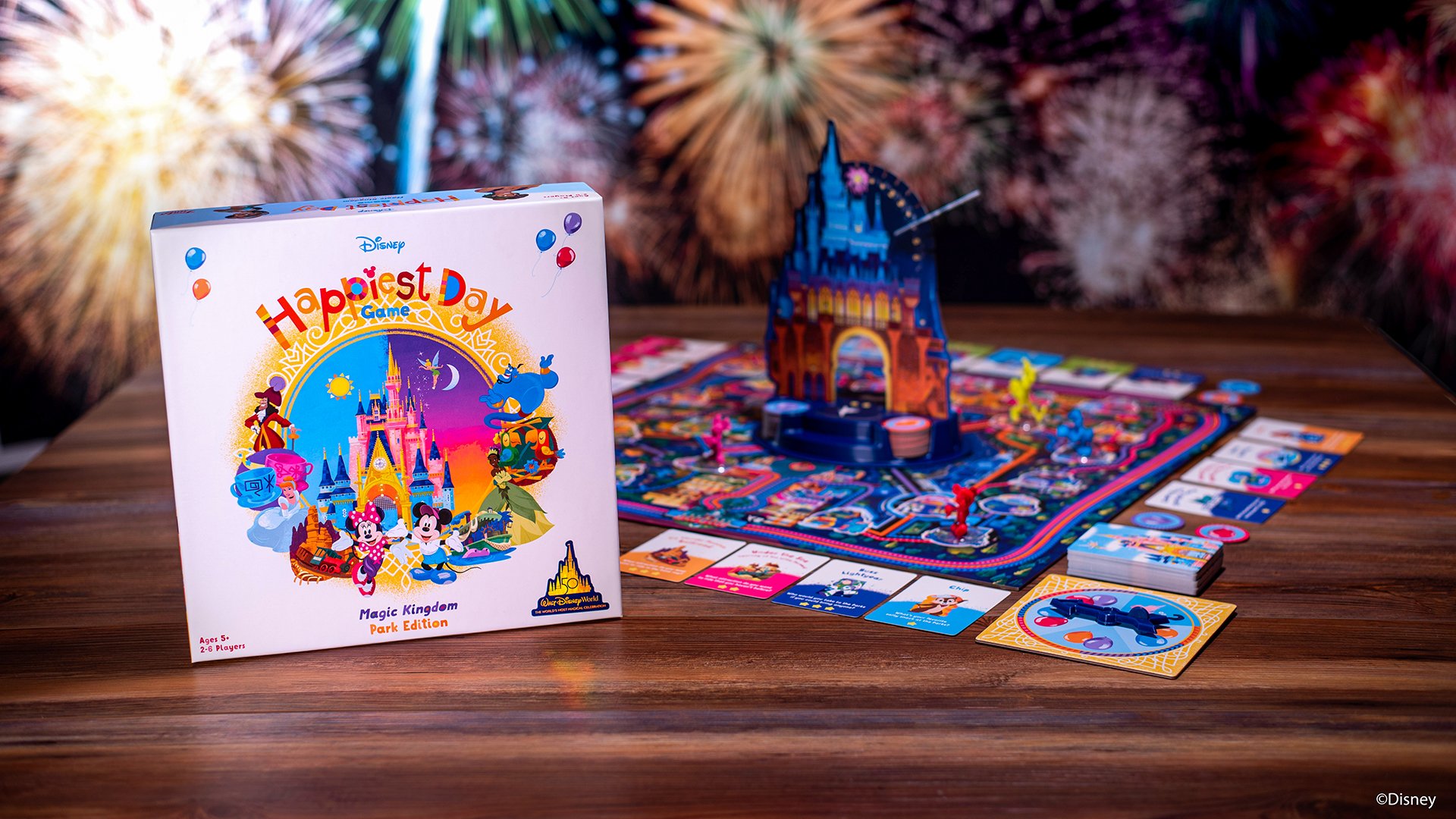 We had the chance to try Disney Happiest Day.

Disney Happiest Day is a family-friendly tabletop game for 2-6 players with a recommended age of 5+. The game challenges players to collect as many stars (points) as possible by visiting different attractions and characters around the Magic Kingdom Park at Walt Disney World Resort.

Each game of Disney Happiest Day has an expected play time of 20 minutes.

The Disney Happiest Day game board is double-sided. One side features a colorful “map” of the Magic Kingdom Park set during the daytime, while the other side features a similar map at night. The map is composed of colorful paths that lead players to the different attractions and characters that are found throughout Magic Kingdom Park. The center of the board features a large standee of Cinderella Castle, which is also double-sided, with one side representing the castle during the day and the other side representing the castle at night.

In each game, players will start with four cards that feature different characters and attractions that can be found in Magic Kingdom Park. Starting at Cinderella Castle, players will use a spinner and colorful balloon tokens to move their character around the park with the goal of reaching the attractions and characters on their cards. When players land on a spot that features one or more of their necessary attractions or characters, they can add the associated card(s) to their score pile. Each card features one to three stars, which are worth points at the end of the game.

The game’s spinner features spots that allow players to collect the colorful balloon tokens they need to move throughout the park. The spinner also has a spot that features a picture of Cinderella Castle alongside a question mark symbol. When the spinner lands on this spot, players can either travel to Cinderella Castle to draw more cards or answer the question at the bottom of one of their cards to instantly travel to the matching location on the board. These questions are open-ended and will encourage families to talk about their favorite attractions, foods, and more around the Magic Kingdom Park.

While the game board is beautiful, it’s also fairly cluttered, and players may need to take a moment to search for the different spaces they need to visit before making a move. The paths between spaces are color-coded, and players can only move between two spaces if they have a balloon token in the matching color. Players aren’t required to use all of their balloon tokens on each turn, and they can save their extra balloon tokens to be used later on in the game.

This setup takes a moment to get used to, since the board is so full of imagery and paths, but it also does a nice job of testing the player's observation and problem-solving skills. For instance, if players can’t take the direct path between two locations because they don’t have a balloon token in the correct color, they may be able to spend multiple balloon tokens to take a longer route to the same spot.

While the game is technically competitive (each player is trying to earn as many points as they can on their own to win the game), it can also be played in a somewhat cooperative fashion. That is, we found it fun to help other players find “roundabout” ways to reach the locations they need.

Each time players finish a turn on a train station space or at Cinderella Castle, the Tinkerbell Marker will move one spot closer to the top of Cinderella Castle. Once Tinkerbell reaches the top, the game board is flipped over and players can begin visiting attractions and characters around Magic Kingdom Park at night. While the board’s general setup remains the same at night, the characters will move to different spaces at night and some of the paths between spaces may have changed color between day and night.

Once Tinkerbell reaches the top of the castle at night, the game ends, and the player who has collected the most stars (points) wins.

We really enjoyed Disney Happiest Day. While the gameplay is simple, it requires just enough strategy and problem-solving to be really fun without becoming overwhelming.

That being said, the game’s “cluttered” layout may be a bit overwhelming at first. Families can overcome this by working cooperatively if someone needs extra help. Groups could also play the game in teams, rather than individually.

Parents should know the game’s length is very customizable. While the game will tell players where to place the Tinkerbell Marker on the Cinderella Castle standee based on the number of players, groups can ignore this requirement and place the Marker on any spot they’d like, depending on how long they’d like the game to last.

Disney Happiest Day: Magic Kingdom Park Edition is a beautiful and fun tabletop game for Disney fans of all ages. We highly recommend adding this one to your tabletop game collection.