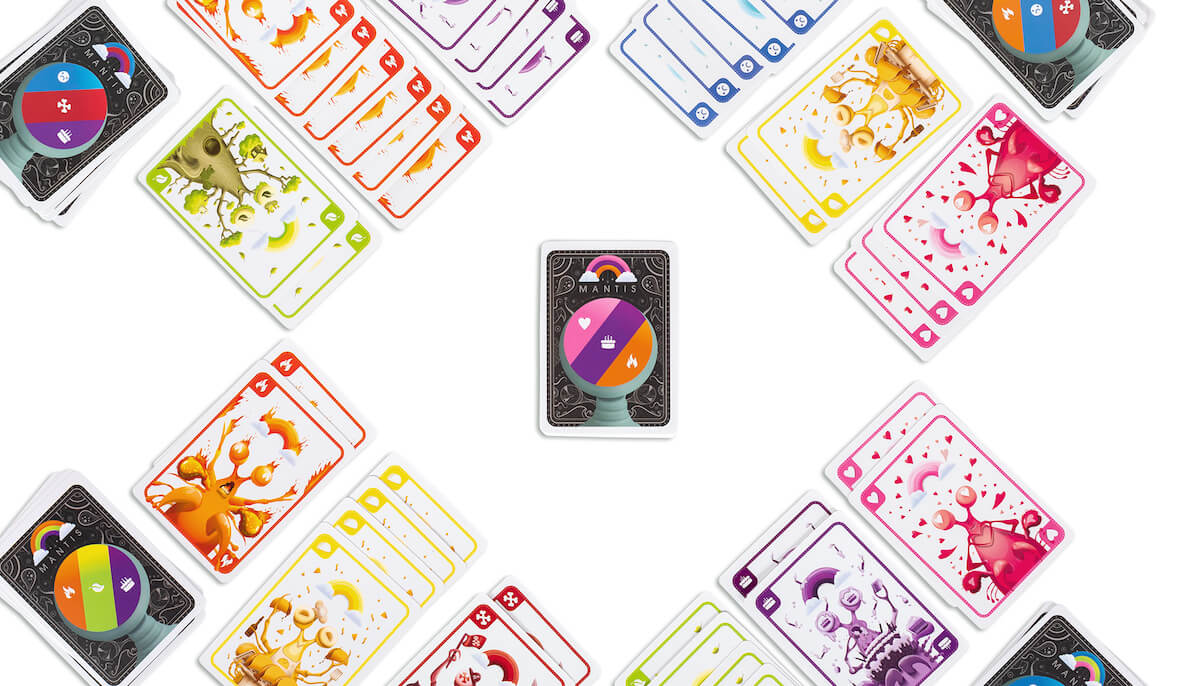 Exploding Kittens, the company behind games like A Game of Cat & Mouth and Zombie Kittens, released Mantis, a colorful card game inspired by the mantis shrimp.

We had the chance to try the Mantis card game.

Mantis is a card game for 2-6 players with a recommended age of 7+. The game features artwork inspired by the mantis shrimp, a colorful crustacean that was previously featured in a comic by artist Matthew Inman, who is also known as The Oatmeal. Inman is co-founder of the Exploding Kittens tabletop game company.

In each game of Mantis, players are challenged to earn a set number of points by making matches with the cards in their Tank.

The game’s deck has 105 cards that feature over-the-top cartoon pictures of mantis shrimp in different colors. At the beginning of the game, each player receives four cards in their Tank. These cards are placed face-up in front of each player, rather than being held in each player’s hands.

The rest of the cards are placed face-down in a draw pile. The back of each card has a circle containing three colorful sections. When players look at the back of a card, one of the colors in this circle will always match the color of the mantis shrimp on the other side of the card. For instance, a card with a purple mantis shrimp may have a circle with orange, purple, and red sections on the back.

Once players decide how they are going to play on their turn, they flip over the top card of the draw pile. If they’re trying to score in their own Tank and they flip over a card that matches one or more cards in their Tank, they can move these matching cards and the card they drew to their Score Pile. If there is no match, the new card is added to the player’s Tank and their turn is over.

The first player to collect 10 cards in their Score Pile wins the game. In a two-player game, this requirement increases to 15 points, but players have the freedom to use any score requirement they want (however, since there is no discard pile, players may need to account for the deck eventually running out of cards).

To be especially clear, players can only score points by trying to match cards in their own Tank. Even if someone steals one or more cards from another player’s Tank, they can only add these stolen cards to their own Tank on that turn, and not their Score Pile. This means the cards they’ve just stolen can potentially be stolen again before they have a chance to add them to their own Score Pile.

We really enjoyed playing Mantis. The game has a simple setup that’s easy to understand and quick to play, and it focuses on a nice combination of luck and strategic thinking.

The Mantis game box includes The Oatmeal comic “Why the Mantis Shrimp is my favorite animal.” The comic discusses how the mantis shrimp violently kills its prey, and it features some comical violent imagery. Even though there isn’t any gore or truly adult imagery in the comic, it may still be inappropriate for younger readers.

Players aren’t required to read the comic before playing the card game. If you’re concerned about the comic’s content, you can check out the digital version of the comic here. This will allow you to see what’s inside the comic before deciding whether to purchase the Mantis card game.

Mantis is a fun, colorful card game with simple gameplay and great artwork. We recommend picking this one up for your next family game night.

Mantis is now available to purchase for $19.99 on the Exploding Kittens website and at other retailers.