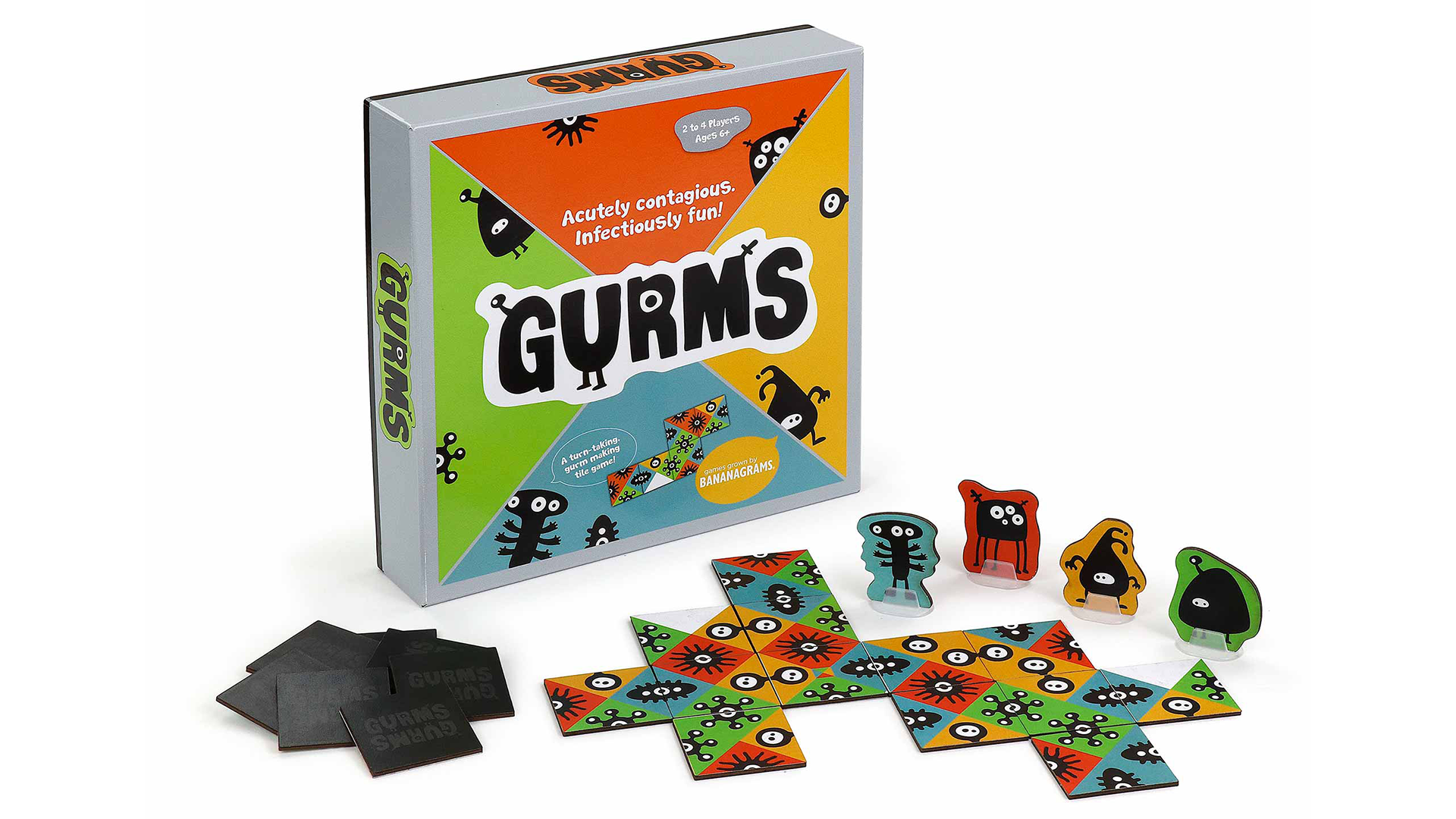 We had the chance to try Gurms.

What is Gurms? How do you play this game?

Gurms is a simple tile-matching game for 2-4 players aged 6+ that features gameplay that’s similar to the classic game of Dominoes. In each game, players will be able to play tiles into a central game area to form gurms, friendly creatures that are inspired by germs.

Before the game begins, each player will choose one of the game’s four gurm creature tokens. Each token is associated with a different color: red, yellow, blue, or green.

These colors match the colorful sections on the game’s 60 gurms tiles. Specifically, each gurms tile has triangular sections that each display half of a gurms creature and have a red, yellow, blue, or green background.

Each completed gurm is worth points at the end of the game. Ideally, each player will want to create as many gurms that match the color of the token they selected as they can while preventing their opponent(s) from creating gurms that match their own token.

Each time a new tile is added to the board, the next player may have more options for where to play their next tile. This setup allows players to think strategically so that they complete the best action on each turn. Once someone plays a tile, they can collect another tile from the pile of face-down tiles at the edge of the play area.

As the game progresses, it’s possible to create “strains” of matching, completed gurms that are touching side-by-side or in a diagonal orientation. Strains are worth more points than individual gurms at the end of the game. As the play area expands, players may also be required to match more than one edge of a tile in order to place tiles in certain positions.

While many tiles only feature colorful images of gurms, some tiles have a triangular white section on one edge. When these tiles are played, no tiles can be played touching the white section.

When all of the tiles have been played to the central area, the game ends and each player can count how many gurms have been created that match the color of the token they selected at the beginning of the game. The player who earned the most points wins.

Gurms is a simple and fun tabletop game that’s easy to learn and teach to new players. Plus, even though the game was designed for children, the level of strategy here may appeal to players of multiple ages.

That is, players can think strategically to decide where they should place their next tile when they have multiple options to choose from. Players can focus on forming gurms to earn points for themselves, and they can also play tiles in an attempt to stop other players from forming gurms of their own.

Is there anything else parents need to know about Gurms?

Parents should know that Gurms can be customized to suit each group’s tastes or needs. For instance, the game’s instructions sheet says players can ignore the bonus points earned when strains are created and instead make every gurm worth a single point at the end of the game.

We also feel the game could be enjoyed in two teams of two players, rather than having all four players compete against one another. This may be a preferable setup if adults are playing alongside children, since the older players could help the children make the best move for their team on each turn.

Gurms is a casual game that doesn’t take long to play, and it does a nice job of encouraging players to think strategically on each move. We recommend checking this one out.

Gurms is available for $12.99 on the Bananagrams website and at participating retailers.