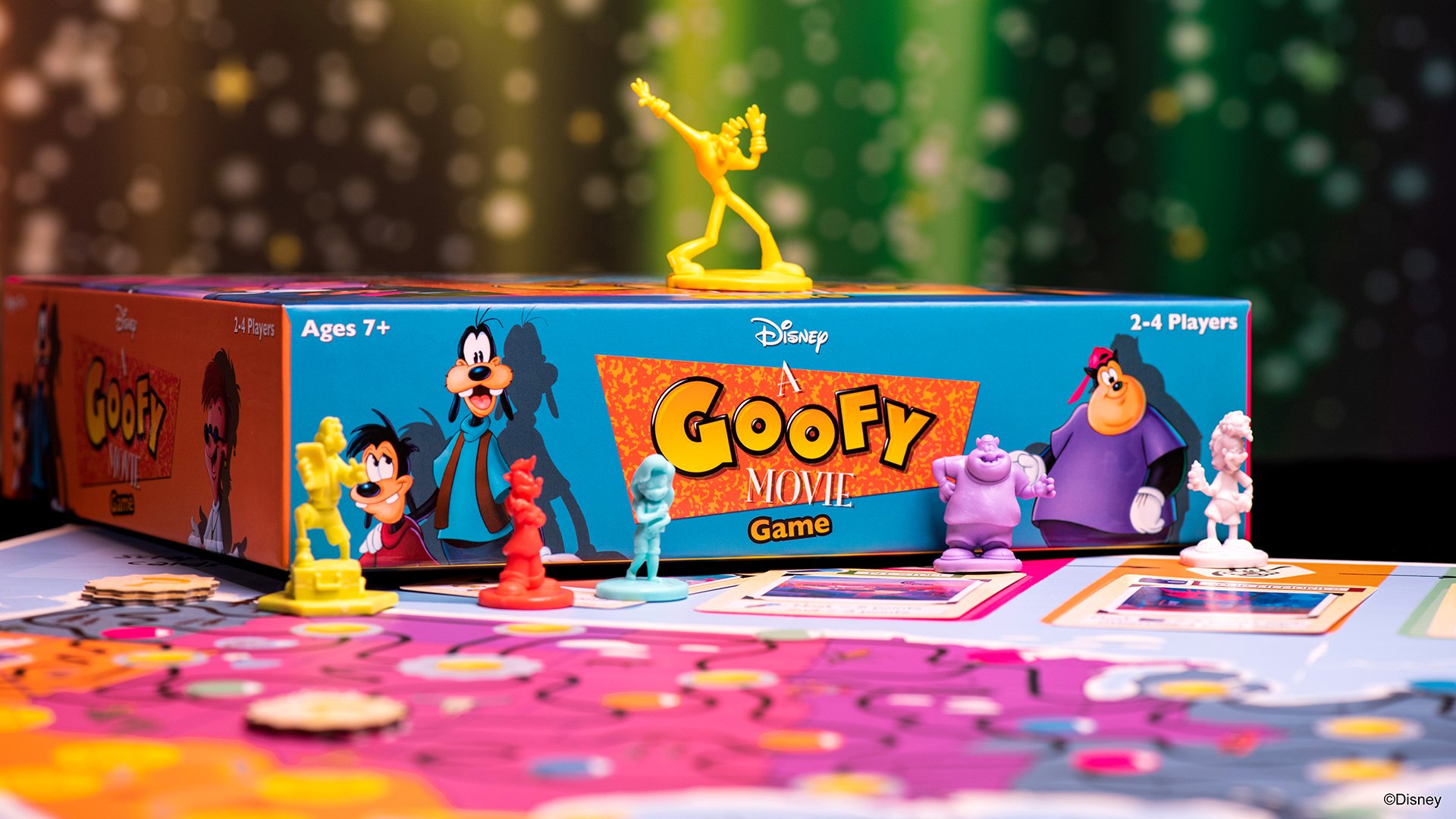 We had the chance to try A Goofy Movie Game.

A Goofy Movie Game is inspired by the cross-country road trip Goofy and his son Max take in the film A Goofy Movie. Players will be challenged to collect as many points as possible as they make their way west across the U.S., with the game ending at the Powerline concert in Los Angeles.

A Goofy Movie Game is for 2-4 players with a recommended age of 7+. Each game has an expected play time of 30 minutes.

A Goofy Movie Game is played in rounds. To begin each round, all players will simultaneously play one of their character cards that’s associated with the character figure they chose before the beginning of the game (Max, Roxanne, P.J., or Bobby). Each character card has a number in the corner and a colorful background (pink, orange, blue, or green) that corresponds to a color-coded spot on the game board that holds a “Scrapbook Card.” Scrapbook Cards are worth points at the end of the game. A Goofy figure will move across these color-coded spots throughout the game, which we’ll talk about more in a bit.

Once the character cards are played, the group will compare the colors and numbers on the cards. If two or more players played a card with the same color, the numbers on these cards are compared and the player who played the card with the highest number will collect the Scrapbook Card from the matching color-coded spot on the board. If only one player played a card in a certain color, no comparison is needed and the player can collect the Scrapbook Card from the associated color-coded spot on the board. Once a Scrapbook Card is taken from the board, a new one is drawn from the deck to replace it.

Each Scrapbook Card has a symbol, like a camera or a fishing rod, and these symbols are worth varying numbers of points at the end of the game. Some cards are worth points on their own, while others are only worth points if they’re collected in pairs or groups.

This point system adds some light strategy to the experience, since players can choose which card symbol(s) they’d like to collect as they attempt to earn more points than their opponent(s).

Depending on where players land on the map, they may be able to collect an additional Scrapbook Card, collect a bonus token or roll the game’s die. Bonus tokens can be used to earn bonus points at the end of the game, or they may allow players to instantly collect a Scrapbook Card of their choosing from one of the color-coded spots on the board.

The die, meanwhile, has symbols representing Goofy and Powerline. If players roll the Goofy symbol, they’ll collect the Scrapbook Card from the color-coded spot next to the Goofy figure and then move the Goofy figure to the next color-coded spot on the board. If players roll the Powerline symbol, they’ll move the Powerline figure across his path at the bottom of the board (this path is separate from the paths the players are using). Some sides of the die have more than one symbol, so it’s possible both actions may take place in a single round.

A Goofy Movie Game is a decent tabletop game. The gameplay is straightforward and it’s fairly easy to teach to new players, but we weren’t blown away by the experience.

At the same time, whether or not a group enjoys A Goofy Movie Game will likely be heavily impacted by whether or not they’ve seen and enjoyed the film that inspired it. The game features artwork, symbols, and text from the film, and if players haven’t seen the movie, they likely won’t appreciate these references.

In the interest of fairness, I feel it’s important to point out that I had never seen A Goofy Movie before I watched it so that I could play this game, so I didn’t come into the experience with nostalgia for the film. I’ll also admit I really wasn’t impressed by the film. Overall, this mean I’m likely not the target audience for this game, and it may be that players who have a greater fondness for the film may enjoy the game more.

A Goofy Movie Game is a simple experience that will likely appeal more to fans of the film than anyone else. If your family has never watched the movie that inspired the game, there isn’t anything special here to make it a must-have.