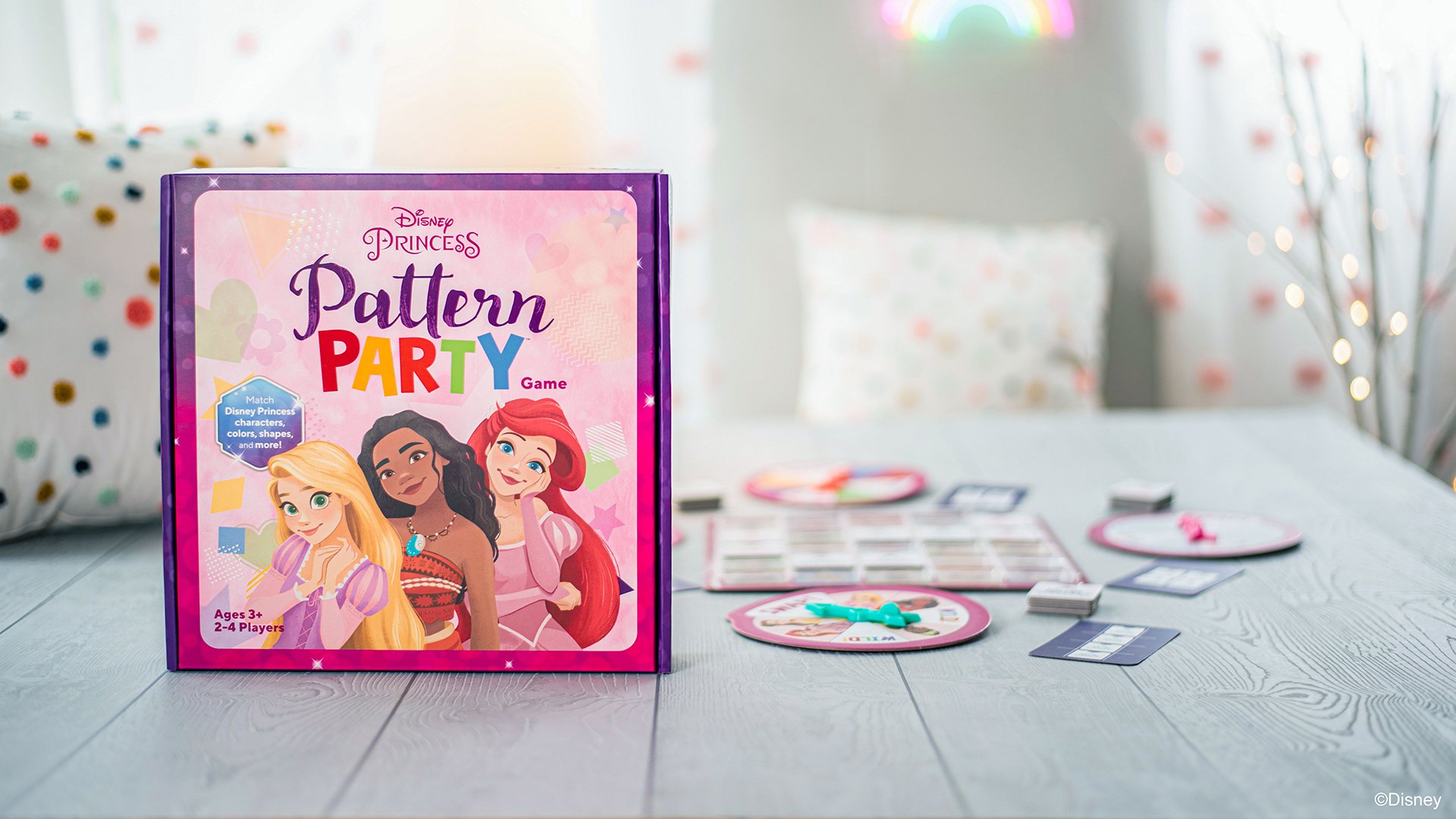 Funko Games recently released Disney Princess Pattern Party, a tabletop game for littles that will have players match colors, shapes, and patterns as they play.

We had the chance to try Disney Princess Pattern Party.

What is Disney Princess Pattern Party?

Disney Princess Pattern Party is for 2-4 players with a recommended age of 3+. Each game has an expected play time of 20 minutes.

Before each game of Disney Princess Pattern Party, each player will take a stack of colored crown tiles and a Goal Card. The Goal Card shows a pattern of four crown tiles that the player will need to recreate on the game board. Each Goal Card is double-sided, with one side featuring a basic pattern and the other side having a slightly more complicated pattern.

Each player will also take one of four spinners. Each spinner focuses on a different theme: colors, shapes, patterns, and the Disney Princesses themselves. The game features five Disney Princesses: Tiana, Ariel, Belle, Moana, and Rapunzel.

While each player starts the game with the spinner of their choosing, each spinner features a “Swap” space that will cause players to exchange spinners when it’s landed on. While it’s not guaranteed that players will ever land on the “Swap” space, this feature should give players the opportunity to use multiple kinds of spinners throughout a single game (we’ll talk more about the “Spin” feature in a bit).

Players may have multiple spaces to choose from that match the color, shape, pattern, or Princess they’re looking for on their turn. This adds a touch of light strategy to the game, as players will need to decide which space to claim on each turn. That is, they can choose to help themselves by claiming a space that goes along with the pattern on their Goal Card, or they could claim a space that will stop another player from creating their own pattern in that area.

Each spinner also has “Wild” spaces. When players land on one of these, they can place one of their tiles on any space on the game board, even if the space has already been claimed by another player. This adds more complex strategy to the game. For instance, players can use this technique to take over a space from an opponent who is about to win the game. Each space on the game board can hold up to four tiles.

Finally, as we mentioned, each spinner has a “Swap” space. If someone lands on the Swap space, every player will need to give their current spinner to the player to their left. If less than four people are playing the game, the game still uses all four spinners. Any leftover spinners are left on the table as though they’re in front of imaginary players so that they can be included in the exchange when the spinners are swapped.

Disney Princess Pattern Party is a cute and simple tabletop game that does a good job of testing players’ pattern, color, shape, and image recognition, while also introducing kids to the concept of strategic thinking.

The game’s light strategy should also make the experience more enjoyable for older players, since it makes the game a bit more complex.

While we enjoyed Disney Princess Pattern Party, we do have a minor complaint about the game. The crown symbols on the players’ tiles are identical, and only vary in terms of color. We wish the tiles were more unique so they would stand out more from one another visually as the game board starts to fill up.

Disney Princess Pattern Party is a cute and simple experience that’s a nice option for introducing littles to the world of tabletop gaming. Plus, while the game was designed for young children, it isn’t so overly simple that it can’t be enjoyed by parents and adults who are playing alongside their little ones.

If you’re looking for an affordable tabletop game for the youngest players in your life, we recommend checking this one out.