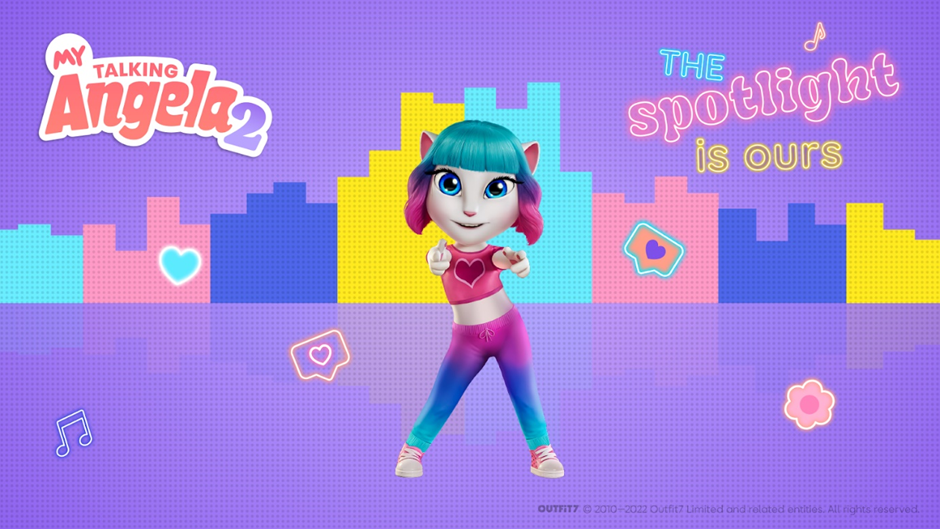 Outfit7, the company behind the popular Talking Tom and Friends franchise, released a music video featuring Talking Angela, the star of the My Talking Angela 2 mobile game.

In addition to releasing this music video, Outfit7 released an update for My Talking Angela 2 on mobile devices. The update adds new seasonal outfits, decorations, and stickers to the game, as well as a new talent show activity. In the talent show activity, players can help Angela perform for a panel of judges. If the judges like Angela’s performance, players can unlock “exclusive rewards.”

Outfit7 shared some tips with SuperParent that can help My Talking Angela 2 players as they dive into the game’s summer update:

If you’re a long-time fan, then you already know that Talking Angela is super talented, and truly shines at pretty much everything she tries her hand at. But now My Talking Angela 2 finally gives you and Angela the chance to prove how talented she is. If you go to the city screen, you’ll notice a new, neon-lit stage opposite the cupcake bakery. Tap on it to enter the talent show.

Now you’ll get a choice of at least two activities - for example, jewelry making and dancing - through which you can prove your talent and impress the judges (namely Angela’s pets Flip, Squeak, and Dot). Choose which activity you want to do, then press the button and complete the activity. After the judges show you how much they loved your performance, you’ll be awarded some summer tokens. Collect enough of these and you can choose from one of nine prizes, and collect all nine prizes before the event finishes, and you can get a really special prize.

Whenever you complete an activity in the Talent Show, you’ll be rewarded with some summer tokens, and these tokens will gradually fill the token bar displayed at the top of the Talent Show screen. Each time the bar fills all the way across, you’ll get the chance to pick one of the nine rewards on the reward tile, and if you get all nine rewards before the event finishes, you’ll get the extra special reward shown in the circle on the reward tile screen.

3. Make your own Unique Jewelry

The best way to keep up with the latest summer jewelry trends is to make your own from scratch. The first thing to do when making jewelry in My Talking Angela 2 is to choose what kind of jewelry piece you’re going to make. A majestic tiara? An elegant necklace? Or maybe a funky bracelet? Next you have to choose the base colour, and can pick from subtle silver, extravagant gold or, Angela’s favourite, bright pink!

Now it’s time to select the gems with which you’re going to decorate your base piece, and to carve them into cool, funky shapes. You get two gems per piece, and for each of those you get to choose the stone and the shape. Use the hammer to break up the gem stones, then the chisel to carve them into the shape you want. Then, when your gemstones are ready, drag and drop them into place on your piece. The final stage is to use the sponge to buff and polish your jewelry so that it really shines. And the really cool thing is that you can craft as much jewelry as you want!

Summer is a new season and, in Angela’s world, that means much more than a change in the weather. It means new trends, new fashion statements, and awesome new outfits! Go to Angela’s wardrobe, tap on a garment, then tap the left arrow to find the new summer clothing items. There are three new sets to choose from: the beach hippy outfit, the shark diving suit, and the summer princess dress!

There are two ways to get these awesome summer style statements. One way is to buy the individual clothing items using gems. Alternatively, look out for the whole sets being offered as rewards for completing the summer tile event. To do this, you’ll need to collect a lot of summer tokens before the event ends, but it’ll be worth it.

At certain times during the summer season, you’ll be able to collect special summer stickers for Angela’s summer sticker album. The stickers in this album all feature summer items, and Angela doing her favourite summer activities, like chilling on a beach with an ice cold fruit juice. You can get these summer stickers in a lot of different ways. You’ll get a pack every time you go travelling, and you can also get summer stickers by watching ads, or by buying them in the in-game shop.

Adding stickers to the album gets you rewards ranging from flight tokens, to gems, to new items for Angela’s home and wardrobe. And if you manage to complete the whole summer sticker album before the event ends, you’ll get a really rare item of clothing!”

My Talking Angela 2 is available to download for free on iOS and Android devices. The game allows players to take care of Angela's needs (like a virtual pet), dress her up in different outfits, play mini-games, and more. You can learn more about My Talking Angela 2 in our SuperParent First Look for the game.