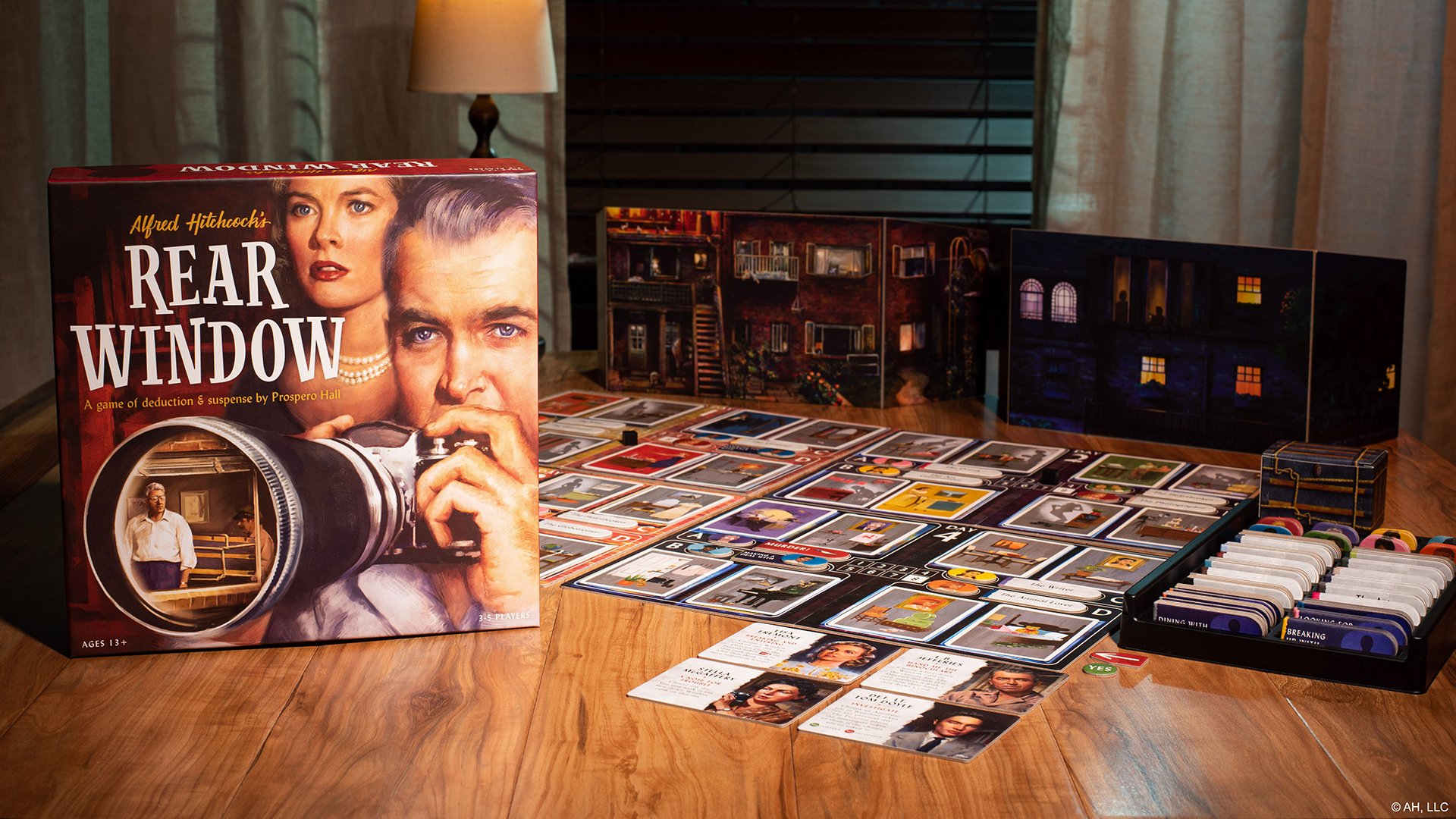 Funko Games, the company behind titles like Pan Am and The Goonies: Never Say Die, is preparing to release Rear Window Game, a tabletop game inspired by Alfred Hitchcock’s 1954 film Rear Window.

We had the chance to try Rear Window Game before it’s released.

What is Rear Window Game?

Rear Window Game is a semi-cooperative tabletop game for 3-5 players with a recommended age of 13+. The game focuses on concepts like deductive reasoning and observation, and it also encourages a bit of strategic thinking.

In the Rear Window film, photographer L.B. Jefferies (played by Jimmy Stewart) begins observing the daily lives of his neighbors, whom he can view through the rear window of his apartment. Without spoiling too much of the film, Jefferies becomes suspicious of what he’s seen and the film follows him as he tries to uncover the truth.

In the Rear Window tabletop game, one player becomes “The Director,” while the others take on the role of “The Watchers.” The Director will provide clues to the Watchers who are observing the apartment complex through the rear window of Jefferies apartment. The Watchers will need to figure out which resident(s) live in four different aparments, which trait or “attribute” applies to each of the four apartments, and whether or not a murder has taken place in one of the four apartments.

The game has an expected play time of 40 minutes.

Before each game, players will need to set the game’s solution. To do this, the Watchers will choose tiles representing 12 of the available “attributes” that can apply to the game’s residents. These attributes are things like “The Thief,” “The Globetrotter,” and “The Gardener,” as a few examples.

The Watchers will shuffle these tiles with one of the game’s two “Murder” tiles and hand them face-down to the Director, who will select four tiles at random to form the solution. The Director will also need to select the four residents that live in the game’s apartments. They can assign any resident(s) to any of the tiles that have been selected.

The Director’s board and tiles are hidden behind a standing screen to prevent the Watchers from viewing the solution. Any tiles or residents that aren’t part of the solution are hidden in a small paper box for the duration of the game.

Once the solution has been created, the game will play out across a series of four rounds, or days. The Watchers are allowed to freely talk to one another throughout the game, but the Director isn’t allowed to speak once the game begins.

For each day, the Director will draw eight Window Cards from the deck and place them on the apartment spaces on the day’s board in front of the Watchers. If a murder tile is not part of the solution, the Director will work cooperatively with the Watchers to guide them to the proper solution. That is, they will want to play cards that somehow relate to each apartment’s resident and/or attribute to help the Watchers figure out which resident(s) and attribute go with each apartment. For instance, if one of the apartments has “The Gardener” attribute, the Director may want to play cards for that apartment that feature flowers or plants.

Each Window Card features multiple objects, so it may not be immediately obvious to the Watchers why a card was selected for a particular apartment. In our example, the Director may play a card with a plant in order to guide the Watchers to choose “The Gardener” attribute for that apartment. However, the same card may also feature money or an animal (as examples) – other “clues” that the Watchers could choose to focus on instead.

Once the Director has played all eight Window Cards for a day (they can choose to place up to two Window Cards face down for each day), the Watchers will be able to analyze the cards and make guesses related to which resident(s) and attribute correspond to each apartment.

The Watchers also have a standing screen in front of their side of the table, which features icons and elements from the game that they can point to if they’d like to keep their ideas private from the Director. If the Watchers think a murder has taken place, this screen would allow them to talk about the murder without letting the Director know they think a murder has happened (we’ll talk more about how a murder changes the game in a bit).

From there, the next day begins and the cycle continues, with the Director playing eight new Window Cards and the Watchers having another opportunity to analyze the clues and make guesses. The Watchers can always reference the Window Cards from the previous day(s), which may help them form a more complete picture of the solution in their mind and make more accurate guesses.

If the Watchers can correctly guess the resident and attribute for every apartment before the end of the fourth day, the entire group (including the Director) wins the game.

While we didn’t play a game where a murder tile was part of the solution, we imagine the gameplay would become slightly more complex in these cases, as the Director may choose to play unrelated Window Cards each day in an attempt to throw the Watchers off. Or, they may choose to play some Window Cards face down to give the Watchers less information about a particular apartment.

If the Watchers suspect a murder has taken place in one of the apartments, they can only use their murder tile as part of thier guess on the fourth and final day.

If the Watchers successfully deduce where a murder has taken place and also correctly identify the residents and attributes for the other apartments, they’ll win the game. Otherwise, the Director will win.

In addition to these gameplay features, the Rear Window Game features Watcher Placards representing the four main characters from the Rear Window film. Each Watcher Placard has a special ability that the Watchers can trigger once per game to help them reach the final solution. The Director also has access to “Cut Tokens,” which will allow them to draw new Window Cards if their current cards are of no use on the current day.

Finally, some of the game’s attribute tiles relate to more than one resident. For instance, one attribute tile says “Arguing With,” while another says “Looking for Romance With.” If one of these tiles is part of the solution, the Watchers will be required to identify an additional resident that corresponds to the apartment. This adds extra difficulty to the experience.

The game does a great job of building suspense as players move closer to the fourth day, especially if the Watchers are close to the correct solution and only need to make changes to a few items. That is, the Watchers will need to analyze their previous choices and decide which item(s) they're more confident about and which item(s) they should ultimately change, all the while knowing that it's possible they could be making a mistake and changing the wrong item(s).

We also appreciate that the game is a customizable experience. While the game was designed for 3-5 players, it also works as a two-player game, with one player acting as the Director and the other being the only Watcher. We can also see the game being really entertaining with more than five players during a party or other gathering.

Families can also make the game’s tone a bit lighter (and make the game a bit easier) by removing the murder tiles from the equation. In this case, the Director would only work cooperatively with the Watchers, rather than sometimes working against them. Families can also choose to never use the attribute tiles that relate to an additional resident, which will make the game easier.

Finally, families can choose to never use tiles like the “Looking for Romance With” tile, if they find the topic inappropriate.

The Rear Window Game is a wonderful tabletop game that tests players’ observational skills and deductive reasoning in a really fun way. The experience also does a great job of building suspense when the game is almost over and the solution seems so close (yet may still be far away).

Even if your family hasn’t watched the Rear Window film that inspired the game, we highly recommend picking this game up.