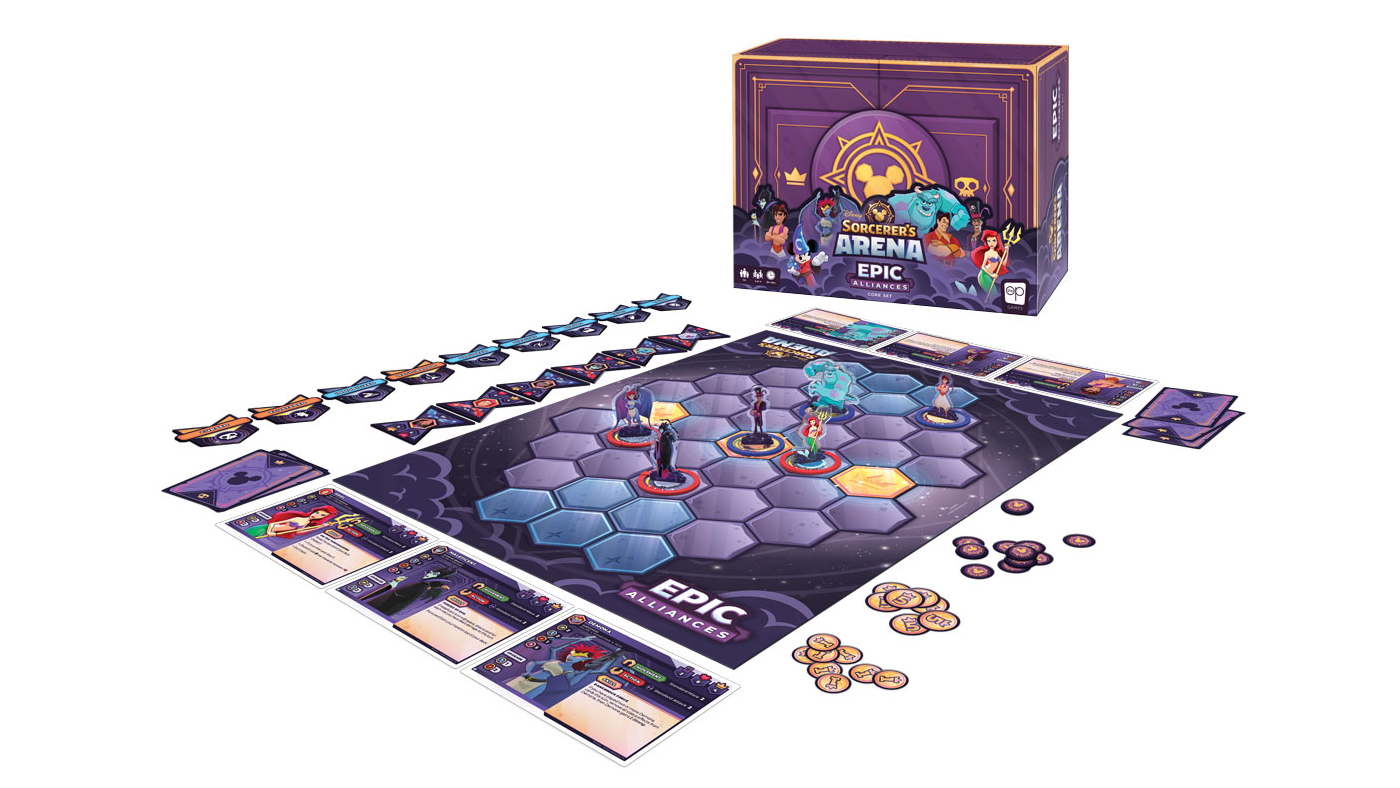 Disney Sorcerer’s Arena was released on mobile devices in 2020. The free-to-play game allows players to collect Disney and Pixar characters and take them into turn-based battles against a variety of enemies. (You can learn more about the game in our SuperParent First Look.)

Now, The Op has released a tabletop game inspired by the Disney Sorcerer’s Arena mobile game.

The Disney Sorcerer’s Arena: Epic Alliances Core Set is for two or four players with a recommended age of 13+. The game can be played in a one-vs-one format, or in a two-vs-two team format. Each game has an expected play time of 35+ minutes.

Disney Sorcerer’s Arena: Epic Alliances allows players to control teams of Disney and Pixar heroes and villains in battles on a large game board, or arena. As players defeat their opponents, they’ll earn Victory Points, and the player(s) with the most Victory Points at the end of the game win(s).

The game’s instruction booklet teaches players the rules of the game across four chapters and a series of one-on-one matches that introduce more mechanics and rules over time. For instance, the first chapter teaches players the game’s most basic rules and will encourage them to complete at least one game with one player using the team of Sorcerer’s Apprentice Mickey and Aladdin and the other player using the team of Gaston and Ariel.

Once players have completed all four chapters, they’ll be able to move onto team-based games of two players vs. two players. These team games also have their own rules to follow.

During a game of Disney Sorcerer’s Arena: Epic Alliances, players will be able to move their characters around the arena game board and play cards to attack their opponents. Each playable character has a base that displays their maximum Health Points. As the character takes damage, players will move the ring on the character’s base to indicate their current health.

Different cards have different kinds of effects. For instance, some cards trigger a status effect on a character. Each character also has its own Character Ability Card that lists the character’s special skill(s) and more.

The Turning the Tide Expansion features three new playable characters: Moana, Davy Jones, and Stitch. Each character comes with its own deck of cards, Character Ability Card, and the other components needed to use them with the Core Set.

You can learn more about the Disney Sorcerer’s Arena: Epic Alliances Core Set on The Op’s website.