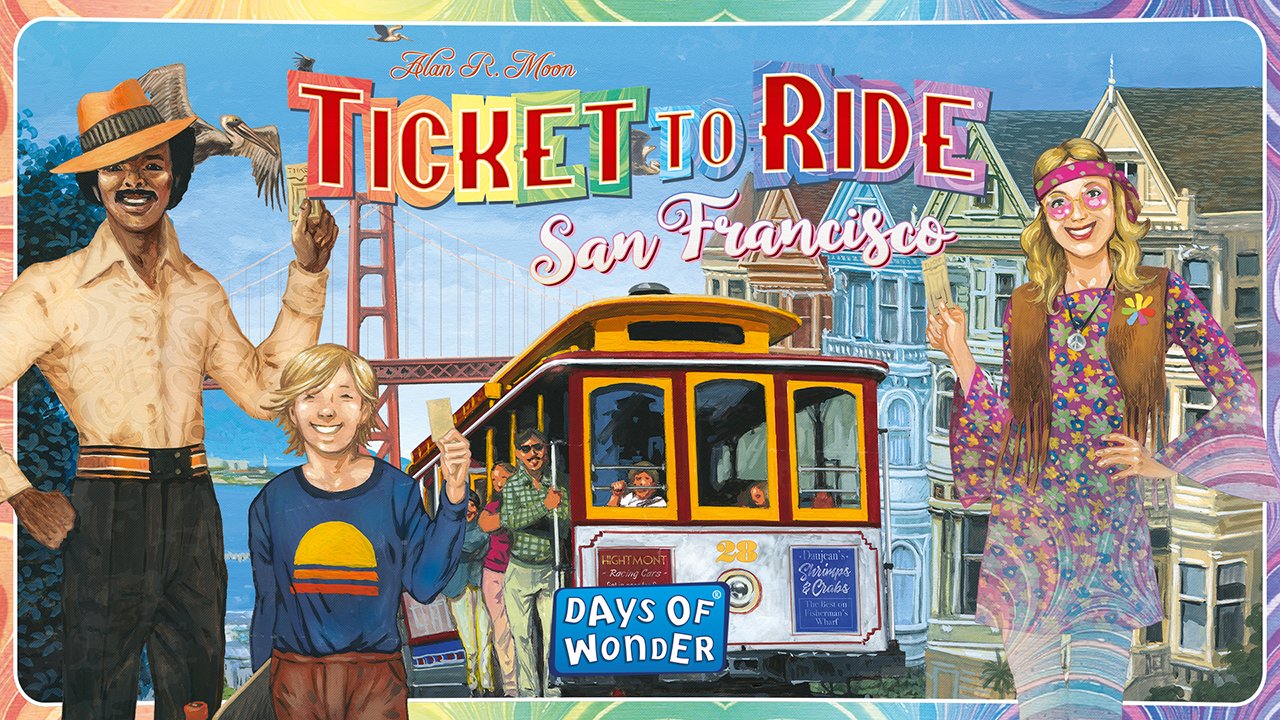 Ticket to Ride: San Francisco will be released on June 19, 2022. We had the chance to try the game before it’s released.

What is Ticket to Ride: San Francisco?

Ticket to Ride: San Francisco is the latest title in the popular Ticket to Ride series of tabletop games from Days of Wonder and Asmodee. The game allows players to place cable car pieces on a series of routes that connect well-known locations around San Francisco (such as the Golden Gate Bridge and Alcatraz) in order to earn points.

Ticket to Ride: San Francisco is for 2-4 players with a recommended age of 8+. If your family is familiar with other games in the Ticket to Ride franchise, the gameplay here will likely feel familiar.

Each route on the game board is represented by colorful rectangles that correspond to the colors found on the game’s Transportation Cards. For instance, the route connecting Lombard Street and Union Square is represented by two yellow rectangles. In order to place cable car pieces on a route, players need to collect and use the required number of Transportation Cards that match the color of the rectangles on the board.

Each time players claim a route on the game board, they’ll earn points. Players can keep track of their points using the Scoring Track that forms the outside frame of the game board.

Ticket to Ride: San Francisco also features small Tourist Tokens that are placed on a selection of locations around the game board before the game begins. When players claim a route that touches a location with a Tourist Token, they can collect the token and save it until the end of the game (unless they already have a matching token). The more unique tokens players collect, the more bonus points they’ll receive at the end of the game.

To be especially clear, players aren’t required to draw additional Destination Ticket cards during the game, but they can take the risk if they’d like the chance to earn extra points and they think they’ll be able to complete whatever route(s) may be on the ticket(s) before the game ends.

The game continues until one player has two or fewer cable car pieces left to use. At that point, everyone receives one final turn. The player with the most points at the end of the game wins.

Ticket to Ride is one of our favorite tabletop game franchises here at SuperParent. Like other games in the series, Ticket to Ride: San Francisco is easy to understand and fun to play, and we really enjoyed it.

Plus, the game has a smaller setup and doesn’t require as large of a playing surface as some other titles in the franchise, which is a positive for players who may have less space available to play tabletop games.

If your family has never tried a Ticket to Ride game, Ticket to Ride: San Francisco is a fun introduction to the series. The rules are simple to understand, and the gameplay allows players to think strategically without feeling overwhelming.

That being said, Ticket to Ride: San Francisco doesn’t reinvent the wheel when compared to previous titles in the franchise. If your family already owns and enjoys one or more Ticket to Ride games, there may not be enough new and different here to make this a “must have.” But that doesn’t stop the game from being a fun experience on its own.