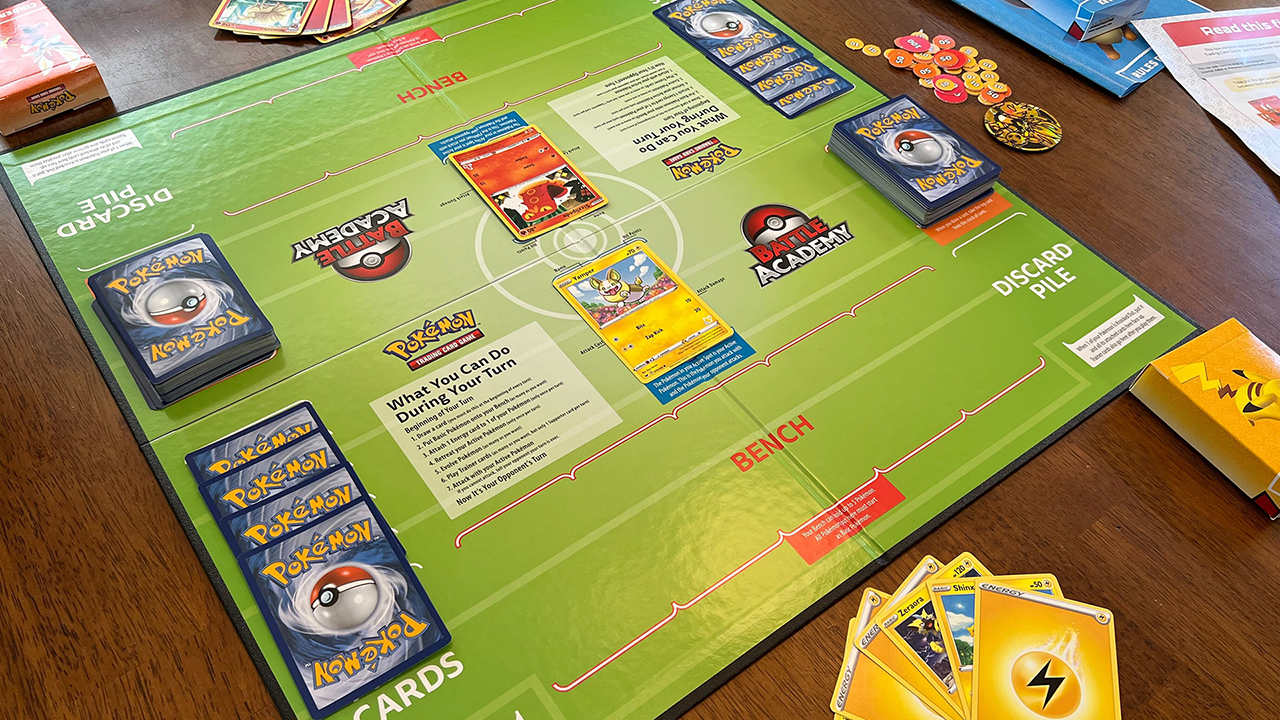 It started with football cards.

“Look at what my dad got me!” my nephew proclaimed as he produced a binder.

The pages were mostly empty, but a handful of cards hinted at a budding collection. The binder was organized by team, and he was eager to show off the section dedicated to his favorite one: the Philadelphia Eagles. He grinned at me with pride as he pointed out the likes of Jalen Hurts and DeVonta Smith.

“I want to collect the whole team!” he said cheerfully.

Not to be outdone, his sister - my niece - interjected.

“My friend at school gave me a Pokemon card!” she shouted. Without waiting for a response, she scampered up the stairs to her room and returned shortly afterwards brandishing a bent Salandit card.

Holding it in my hand, looking at the familiar symbols and yellow border, I was struck by a sudden wave of nostalgia.

“I used to collect Pokemon cards when I was your age!” I said.

She seemed surprised by this. After a moment of silent awe at the fact that, 26 years later, Pokemon remains popular with kids, I proceeded to recount how I had a couple of binders full of cards, and how they have since been lost to time.

“Is collecting cards something that you’d like to do?” I asked, secretly hoping for an excuse to dive in again.

“Yes!” The answer I was wanting to hear.

“Do you know how to play the game?”

With that, the wheels were in motion.

Admittedly, it had been more than a decade since I played my last game of the Pokemon Trading Card Game (Pokemon TCG). The basics were still there, collecting dust in some remote corner of my brain; play a Pokemon, use energy to perform attacks, knock out six opposing Pokemon. But the finer details had long since dissolved.

For my niece (read: me), I would be willing to re-learn, though. But with the game having over two decades under its belt, the prospect of wading back in was nothing short of intimidating. However, a terse Google search revealed the existence of a product aimed at both newcomers to the Pokemon TCG and those of us who have lapsed. It’s called Pokemon Trading Card Game Battle Academy, and I could not have found a more perfect item for my exact situation if I tried.

Originally released in 2020, Pokemon Trading Card Game Battle Academy received a refresher in early 2022. In this new version, each player will pilot one of a pair of preconstructed decks - themed around Pikachu and Cinderace - in a step-by-step match. The cards are stacked in a specific order, and each deck comes with its own play guide that will lead players through the first several turns of a match.

Using the guidebooks isn’t dissimilar from reading a script. Players take turns reading aloud the steps of their turn, following the instructions there, and then passing the turn to the opponent. In this way, Battle Academy teaches the most basic rules of the Pokemon Trading Card Game one at a time. You’ll learn how to play Pokemon onto your bench and into the active spot on the field, how to attach energy and evolve them, and how to play Trainer cards, all at an easy-to-digest pace.

Battle Academy also comes with a board that explains the different zones that cards can occupy, and a dialog box that runs down “what you can do during your turn.”

I adore the back-and-forth of the game's scripted format. It feels like somebody took a tutorial straight out of a video game and translated it to a physical format.

As a complete package, Battle Academy really is an impressively accessible way to learn and play the Pokemon Trading Card Game. Hearing my 8-year-old niece declare “I attack you with Yamper!” and cackle maniacally was an absolute delight. She took each turn eagerly, and didn’t have any trouble following along with the tutorial guide for the Pikachu-themed deck.

It’s important to keep in mind that the decks included in Battle Academy are basic, bare-bones things. The game was designed with players completely new to the card game in mind, and that philosophy is reflected in the card pools themselves. This isn’t a knock on the game at all, but I think it’s important for collectors to set their expectations thusly; you won’t find any Charizard VMAX cards here.

The simple nature of Battle Academy’s design is ideal for kids my niece’s age. She was able to keep up with the evolving board state, and we were able to successfully play a second, un-guided game after finishing the tutorial. I’m not sure she’s ready for more complex decks quite yet, though, but for now, these will do.

There is a third deck included in Battle Academy - one themed around Eevee. There isn’t a tutorial booklet for this one, but it’s just as easy to pilot as the Pikachu or Cinderace decks, and provides a bit of variety for those of us who will be playing Battle Academy for a while.

For me, Battle Academy was a great refresher on the Pokemon TCG’s rules. For instance, I was reminded that you can only attach a single energy card to a Pokemon on any given turn, and that you can only play one Support card per turn.

One unfortunate side effect (if you ask my spouse) of Battle Academy is that it has reignited my enthusiasm for the Pokemon TCG; since playing with my niece, I have purchased far too many sealed products, including a pair of Elite Trainer Boxes and some preconstructed League Battle decks. I have a sneaking suspicion that this is one of the goals behind Battle Academy, but I’m not going to complain.

Numbers-wise, Pokemon is far and away the largest and most lucrative media franchise of all time, beating out titans like Star Wars, Marvel, and Harry Potter. It’s an undeniable juggernaut governed by a massive conglomerate with a primary goal of profit above all else. It’s remarkable, then, that such a property is still capable of evoking feelings of deep, childlike glee.

I came away from Battle Academy with a renewed appreciation for the bonding power of Pokemon. I shouldn’t be surprised - you don’t stick around for 26 years without a solid foundation, after all - but hearing my niece say how cute Yamper is, or ask if she can play with Eevee next, drove the point home for me.

Sitting down to type this review, I recalled the late Friday nights spent meticulously organizing my binder full of Pokemon - counting spaces and admiring art and building decks. I look forward to helping my niece begin her own binder of cards. The same goes for my own son, who is one-year-old at the time of this writing. Gotta catch ‘em all, indeed.