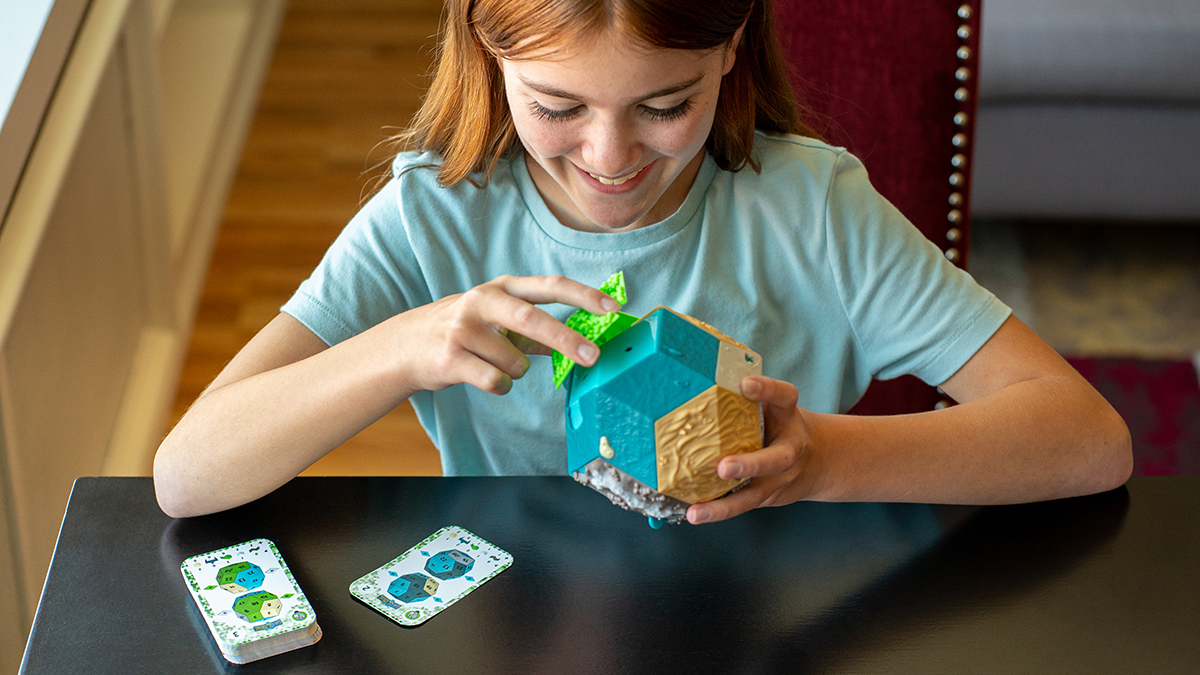 This spring, ThinkFun will release GeoLogic, a logic puzzle game that will challenge kids (and adults) to use deductive reasoning and more to solve 60 puzzles.

GeoLogic is for one or more players with a recommended age of 8+. The game includes a 30-sided “ball” that represents a planet’s core, as well as a variety of biome tiles. Each biome tile has prongs on the back that can be inserted into holes around the core to form the planet’s surface.

The game’s 60 challenges are found on cards that are similar to playing cards. Each card will instruct players to insert specific biome tiles in certain spots around the core to create the starting puzzle. The biome tiles come in five varieties: tundra, forest, mountain, desert, and ocean. Each biome tile has a different shape, which gives each puzzle a different starting layout. The challenges range in difficulty from "Beginner" to "Expert."

One the puzzle setup is complete, players will be told which assortment of biome tiles they’ll need to use to finish creating the planet’s surface (that is, the game includes more biome tiles than will be needed for each puzzle). The goal of each puzzle is to figure out where to place the required biome tiles to complete the planet so that every spot on the core is covered and no pieces are remaining. (If your family is familiar with Tangram-style puzzles, this gameplay here is similar). The solution for each puzzle is found on the back of the puzzle’s card.

To help players set up the core for each challenge, all 30 spaces around the core are numbered, with the “1” space being at the very top of the globe. This will allow players to keep track of which side of the globe is “up” when they’re comparing their core to the pictures on each card.

We had the chance to go hands-on with GeoLogic, and while we love the game’s premise, we wish the numbers for each space on the core were marked with a darker font so they were easier to read. Similarly, we wish the number “1” space was more easily identifiable while playing the game so that it was easier to always know which way is “up.”

That being said, some biome tiles have holes that allow players to see the number underneath, and players can use this information to hold the core in the proper orientation when they’re comparing their core to the pictures on the card.

On the plus side, the biome pieces seem very sturdy, so they should hold up well to repeat play. In addition, the game is designed so the extra biome pieces and the puzzle cards can be stored inside the core when game time is over, which should make it harder to lose pieces. (It’s worth pointing out that the instruction booklet gives players instructions for how to arrange the biome tiles on the core so that this storage is possible at the end of the game. This means you’ll want to keep the instruction booklet even after you learn how to play.)

GeoLogic will be released this spring for $21.99. The game will be available on Amazon and at other retailers.

Disclosure: SuperParent received a copy of GeoLogic for coverage purposes.