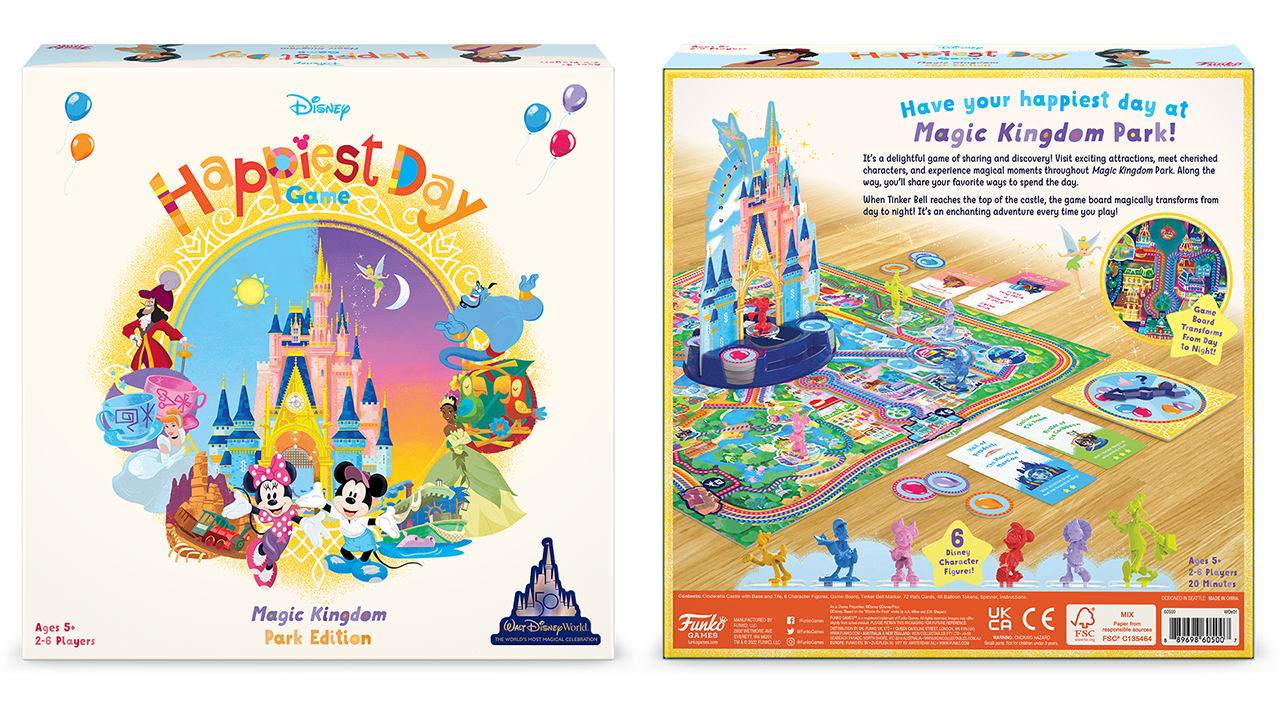 Funko Games, the company behind tabletop games like Funkoverse and Pan Am, revealed a series of new tabletop games inspired by Disney characters and theme park attractions.

All of these games are expected to be released before the end of 2022. Here’s a look at what’s coming soon.

Designed for 2-6 players aged 5+, this tabletop game will allow families to pretend they’re spending a day at the Magic Kingdom theme park. Players will be able to visit different attractions and meet characters around the park as they play.

The game will feature a double-sided game board. One side will have a “day” theme, while the other side will have a “night” theme. The game will start by using the “day” side of the board. As players progress through the game, Tinker Bell will move closer to the top of the theme park’s castle. When she reaches the top, players will flip the game over and begin using the “night” side. Each game is expected to last around 20 minutes.

Inspired by the Big Thunder Mountain Railroad roller coaster at Disney’s theme parks, this tabletop game for 2-4 players aged 9+ will feature a sculpted mountain peak and mine that contains different trenches and paths for marbles to roll down. During each game, players will be able to move their mine cart around the mine and place marbles into their mine cart. These marbles will represent resources that players can collect from the mine. The game will also feature elements of “fate” (or “chance”), which will change things up with landslides, dynamite, and more.

Disney Big Thunder Mountain Railroad Game has an expected play time of 45 minutes. The game will be released in Spring 2022 for $29.99.

This tabletop game for 2-4 players aged 7+ is inspired by the 1995 film A Goofy Movie. The game will challenge players to make their way across the map in order to see Powerline in concert in L.A. Players will be able to play cards that will allow them “to collect memories and travel to new locations!” The game’s cards will feature locations and other elements inspired by the film.

Inspired by Disney’s “The Legend of Sleepy Hollow” (which is one part of the film The Adventures of Ichabod and Mr. Toad), this cooperative game for 2-4 players aged 6+ will challenge players to help Ichabod reach the covered bridge while watching out for the headless horseman.

Funko Games said this title will have “[a]djustable gameplay to fit your family—you can reduce the strategy or make the game more challenging!”

Disney Return of the Headless Horseman Game will be released in Spring 2022 for $19.99. The game has an expected play time of 15 minutes.

You can learn more about the Something Wild games in our review.

This tabletop game for 2-4 players aged 3+ will feature five Disney Princess characters: Rapunzel, Ariel, Moana, Tiana, and Belle. Each player will have their own goal card (like a Bingo card), and they’ll each be able to control one of the game’s four spinners. These spinners will help players match things like a Princess’ color, shape, or pattern. When players land on a “Swap” space on a spinner, all players will swap their spinner with another player. The first player to match four squares on their goal card will win the game.

Disney Princess Pattern Party Game will be released in Spring 2022 for $15.99. The game will have an expected play time of 20 minutes.

Is your family looking forward to playing any of these tabletop games? Let us know on Twitter at @superparenthq.