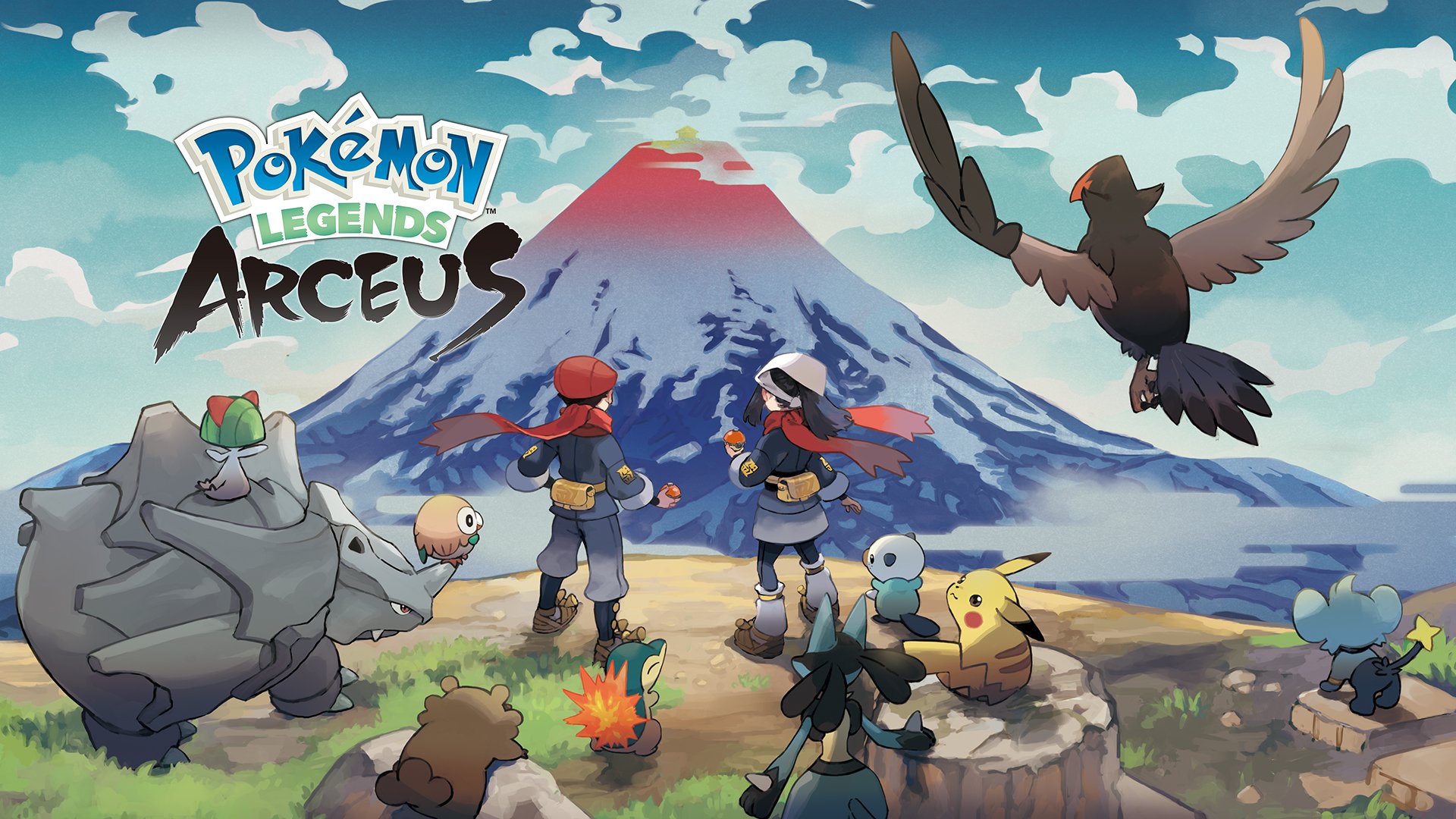 Pokemon Legends: Arceus is now available on Nintendo Switch. We had the chance to check it out.

Pokemon Legends: Arceus is an action role-playing game (RPG) that takes place in the distant past in the Hisui region of the Pokemon universe. Rather than being an entirely new area, the Hisui region is what the Sinnoh region was called before it received its modern name. This means fans of previous Pokemon games (especially games like Pokemon Brilliant Diamond and Pokemon Shining Pearl) may recognize some of the locations featured in Pokemon Legends: Arceus.

In Pokemon Legends: Arceus, players will become the newest member of the Galaxy Expedition Team’s Survey Corps, and they’ll be asked to help the Survey Corps create the first complete Pokedex for the Hisui region.

Along the way, players will be asked to investigate a mysterious phenomenon that is causing some Pokemon to become violent.

Pokemon Legends: Arceus isn’t a traditional Pokemon RPG. Where games like Pokemon Sword and Shield focus on competing in a series of Gym and trainer battles in order to become the region’s Pokemon champion, Pokemon Legends: Arceus takes place before Pokemon Gyms even existed. The game features a single major settlement – Jubilife Village – and instead of focusing on battling other trainers and earning Gym badges, the game focuses on spending lots of time exploring large research zones to learn about the region’s different Pokemon species. (The game allows players to complete a series of story missions, as well as dozens of side quests, so there's lots to do.)

If your family is familiar with the “Wild Area” in Pokemon Sword and Pokemon Shield, the research zones in Pokemon Legends: Arceus share some noteworthy features with the Wild Area. For one, they allow players to freely wander around large, open areas, rather than narrow, linear paths. Plus, Pokemon will appear out in the open in research zones, rather than appearing randomly in patches of tall grass (and in caves, etc.). This means players can choose whether to interact with a Pokemon or run away. Similarly, some Pokemon will run away from players, while others with an aggressive personality will actively chase players and attempt to attack them.

One of the biggest gameplay differences between Pokemon Legends: Arceus and traditional Pokemon RPGs is the fact that Pokemon Legends: Arceus allows players to catch Pokemon without battling them (or even engaging them in a capture screen like in Pokemon: Let’s Go, Pikachu and Let’s Go, Eevee). Instead, players can simply toss Poke Balls at wild Pokemon in the environment. If the capture is successful, every Pokemon in the player’s party will earn experience points. If the Pokemon pops out of the Poke Ball, players may be able to toss another Poke Ball to try the capture again, or the Pokemon may try to run away. The Pokemon may also become agitated and attack players in retaliation.

Players can crouch in tall grass and sneak up behind Pokemon before tossing Poke Balls in order to increase their chances of capturing them.

Players can also battle Pokemon in turn-based battles by tossing the Poke Ball containing one of their own Pokemon at a creature, rather than tossing an empty Poke Ball. During battles, players are shown information related to whether their Pokemon’s moves will be “Effective,” “Super Effective,” and so on against the opponent, which can help them decide which move to choose on their turn

Pokemon can also "master" moves, which allows players to trigger them in an "Agile" or "Strong" style, which adds more strategy to the battle experience. Finally, Players can attempt to capture wild Pokemon during battles, just like in a more traditional Pokemon game.

In cases where a wild Pokemon becomes agitated but players don’t engage them in battle, the Pokemon can and will attempt to attack the player directly. In this case, players can run away if they really don’t want to battle the pocket monster.

If the player’s character takes too much damage, they won’t actually die, but they will lose some of the items they were carrying before being allowed to continue playing. Other players can retrieve these lost items in their own games as they play, which causes them to return to the original owner. The finder will also receive an in-game reward.

On the topic of items, players have a limited number of inventory spaces in Pokemon Legends: Arceus. The game allows players to collect and hold a wide variety of items, including crafting materials that can be used to create new Poke Balls and healing items while out in the field. There are no Pokemon Centers in Pokemon Legends: Arceus, so players can either heal their Pokemon using healing items or return to a base camp in a research zone (or their home in Jubilife Village) to rest and heal their team.

When players are ready to quit exploring (or after they’ve finished a major part of the game’s story), they can speak to Professor Laventon, another member of the Galaxy Expedition Team’s Survey Corps. Professor Laventon will reward players with in-game currency based on the Pokemon they captured. Players will also earn points toward earning their next star rank as a Survey Corps team member based on the research tasks they completed.

How does the Pokedex work in this game?

Since Pokemon Legends: Arceus focuses on creating the first complete Pokedex for the Hisui region, completing a species’ page in the Pokedex requires more than simply catching the species a single time. Instead, each species has a number of research tasks available to complete, which are related to things like capturing the Pokemon species multiple times, battling the species a required number of times, witnessing the Pokemon using certain moves in battle, and so on. As players complete more and more research tasks related to a single Pokemon species, the species’ “Research Level” will increase in the Pokedex. A Pokemon’s Pokedex entry will only be considered truly “complete” once players have reached “Research Level 10” for the species.

Players aren’t required to complete every available research task to reach Research Level 10 for a species, but they will likely need to battle and/or capture each species in the game multiple times to hit that point.

Unfortunately, completing research tasks can become a bit of a grind. Players are required to reach certain star rankings in the Survey Corps in order to make progress in the main story, so players may need to spend some extra time catching and battling Pokemon in order to complete enough research tasks to earn their next star ranking.

The game features multiple research areas to explore, each with different climates and pocket monsters available to encounter, which does break up the standard gameplay a bit. Even so, it’s a bit disappointing when you suddenly reach a wall in the storyline and are forced to work through more research tasks before being able to continue.

Surprisingly, Pokemon Legends: Arceus suffers from some visual technical issues. For one, the graphics are sometimes really rough, and Pokemon and people will appear to have jagged, blocky outlines, rather than smooth ones. This is especially true when you’re in areas like caves or near the shoreline.

Plus, Pokemon that are far off in the distance will sometimes have jerky, almost robotic animations, which only become more fluid and realistic when you move close enough to them.

We don’t consider these issues to be deal breakers, but they are sometimes quite distracting.

Elsewhere, the game’s controls take quite a bit of getting used to, and it’s easy to accidentally press the wrong button during Pokemon battles (for instance, we frequently hit the “attack” button when we’re trying to switch out to another Pokemon in our party).

Pokemon Legends: Arceus takes place during a time when Pokemon were considered terrifying creatures, and as such, human characters make frequent references to the possibility of your character dying or otherwise being in danger as they explore the in-game world.

It's also worth mentioning that Arceus (the Pokemon) is treated as a god-like deity in Pokemon series lore, and the storyline here has multiple references to Pokemon worship, with two groups disagreeing with each other about their beliefs.

Both of these inclusions give the game a more serious and mature tone when compared to traditional Pokemon games, but the experience is still family-friendly.

Finally, parents should know that the game doesn’t feature voice acting, so players will need to be comfortable reading large amounts of text, or play alongside someone who can help them follow along with the story.

Pokemon Legends: Arceus is a really fun twist on traditional Pokemon games, which tend to be very similar. While the game features lots of new elements, it also offers enough familiarity that longtime Pokemon fans can quickly dive in without being overwhelmed by the changes.

While the game does have some issues, we feel they’re rather minor when looking at the entire experience as a whole, and as such, we really recommend checking this one out.

Pokemon Legends: Arceus is now available for $59.99 on Switch. The game is rated E for Everyone by the ESRB.

Editor's Note (02/01/2022): This article has been updated with information about the game's story missions and side quests. In addition, this article previously said Professor Laventon would give players in-game currency based on the research tasks they completed, which is incorrect. Players receive currency based on the Pokemon they've captured, and receive Survey Corps star ranking points based on the research tasks they've completed. We've updated our article with the correct information related to the rewards players can receive from Professor Laventon.