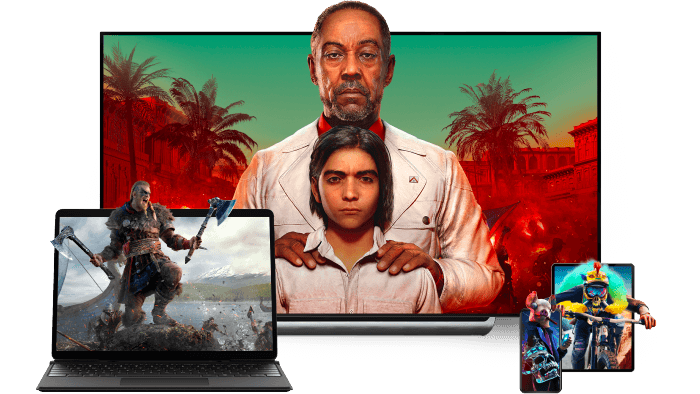 Ubisoft+ is a video game subscription service from Ubisoft, the company behind franchises like Mario + Rabbids and Just Dance (among many others).

Here’s everything you need to know about Ubisoft+.

What is Ubisoft+? How does it work?

Ubisoft+ is a video game subscription service that gives subscribers unlimited access to over 100 of Ubisoft’s games that can be played on PC.

Ubisoft+ has two subscription plans to choose from, and subscribers to the more expensive plan can also stream “select games from the cloud” on Google Stadia and Amazon Luna.

Finally, Ubisoft+ subscribers will receive monthly rewards each month they subscribe to the service. These rewards include “your choice of different customization items, boosters, and more.” Once a subscriber redeems these rewards, they’ll own them permanently, even if they later cancel their Ubisoft+ subscription.

The longer someone subscribes to Ubisoft+, the more rewards they may be eligible to receive. For instance, subscribers will receive a single in-game reward during the first month of their subscription. Once they’ve been a subscriber for seven months, they’ll receive four in-game rewards each month. You can view the rewards timeline on Ubisoft’s website.

How much does Ubisoft+ cost?

Ubisoft+ has two subscription plans to choose from.

The PC Access plan gives subscribers unlimited access to Ubisoft’s catalog of 100+ games, which they can play on PC. This plan costs $14.99 per month.

Is there anything else parents need to know about Ubisoft+?

The Ubisoft+ catalog contains many games that have been rated M for Mature by the ESRB, meaning they’ve been deemed inappropriate for anyone under the age of 17. You can browse the Ubisoft+ game catalog before subscribing to the service to see which games are family-friendly and which games are for adults.

In addition, parents should keep in mind that streaming games through a high-speed internet connection (for instance, through Google Stadia) may use a significant amount of data, depending on how often and how long someone plays.

You can learn more about Ubisoft+ on Ubisoft’s website.