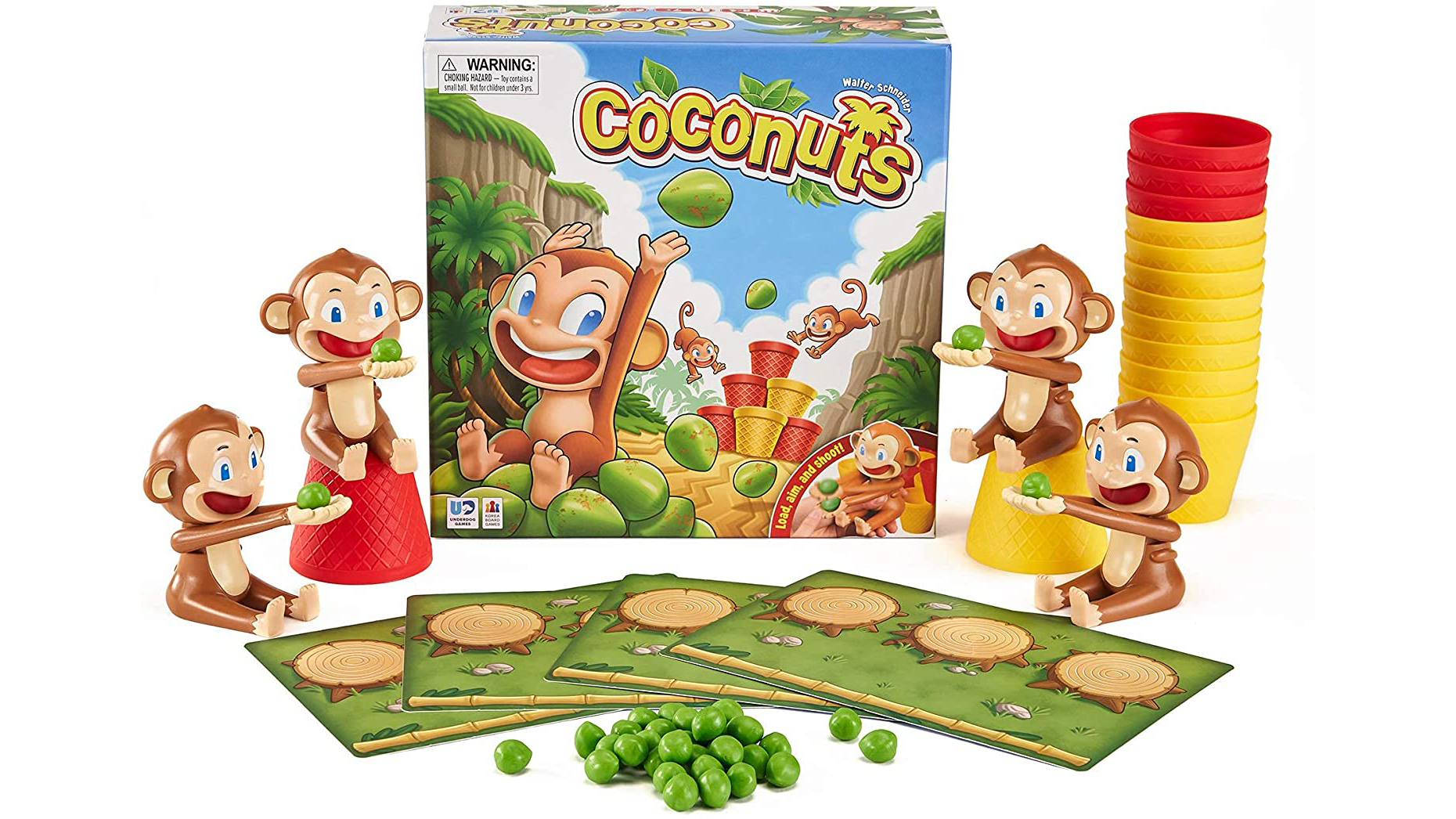 Coconuts is a family-friendly tabletop game from Underdog Games.

What is Coconuts? What’s the game about?

Coconuts is a family-friendly tabletop game for 2-4 players ages 7 and up. It challenges players to fling coconuts into cups in the center of the table using a monkey launcher that has spring-loaded arms.

Each game has an expected play time of 30 minutes.

In a game of Coconuts, each player receives their own monkey launcher, player mat, and eight small, green coconuts. Before the game begins, 14 cups (10 yellow and four red) are positioned in a 3x3 grid or in a triangular shape in the center of the table, depending on the number of players.

On each turn, a player will place a coconut into the palms of their monkey launcher and then position the monkey on the table behind their player mat so that they’re aiming at one of the cups on the table. Players will then push down on the monkey’s arms and let go to fling a coconut in the direction they were aiming.

This flinging mechanic takes some getting used to, as players will need to get a feel for how far to push the monkey’s arms to achieve the distance they want. That is, the first time you play, don’t be surprised if coconuts fly off of the table because someone gave their shot too much power.

Players will take turns shooting coconuts until they’ve used all eight of the coconuts they had at the beginning of the game. Once they run out, they can begin shooting with coconuts that landed outside of cups on the table.

There are three spots for cups on each player’s playing mat. Once those spaces are filled, players will need to stack additional cups on top of them to create a pyramid. The first player to stack six cups in a pyramid on their player mat wins the game. Alternatively, if all of the coconuts wind up inside cups and there are none left to shoot, the player who has the most coconuts in the cups they’ve collected wins the game.

Coconuts is a quick and sometimes chaotic tabletop game that can be enjoyed by players of multiple age groups. It’s really fun to play and even had us laughing out loud.

There’s a touch of skill required, as players will need to observe how far their shots travel and alter the power of their future shots appropriately, but even if players miss a shot, there’s still fun to be had in watching the coconuts fly all over the place as players give their shots too much or too little power.

Plus, the game offers a hint of strategy, since players can choose to aim their coconuts at cups that have been collected by other players in an attempt to steal them so they don’t win the game.

Finally, the game offers a “Monkey Magic Variant” that adds “special powers” to the game for families who want to switch things up. Players can use these special powers to sabotage their opponents once per game. For instance, someone may activate the “Blind Shot” power, which will require their opponent to take their next shot with their eyes closed. Four abilities are listed on the game’s instruction sheet, but families could create more by using their imaginations.

The coconut playing pieces are quite small, and could post a choking risk to very young children. Younger kids should only play the game with proper supervision.

Coconuts is a fun tabletop game that takes little time to set up and learn. While there is a bit of skill required, the simple setup of flinging coconuts at cups is an enjoyable one that may have families laughing before the game is over.

If your family is looking for something different for your next family game night, we recommend checking out Coconuts.

Coconuts is now available on Amazon and the Underdog Games website. The game is priced at $25 on Amazon, as of this writing.