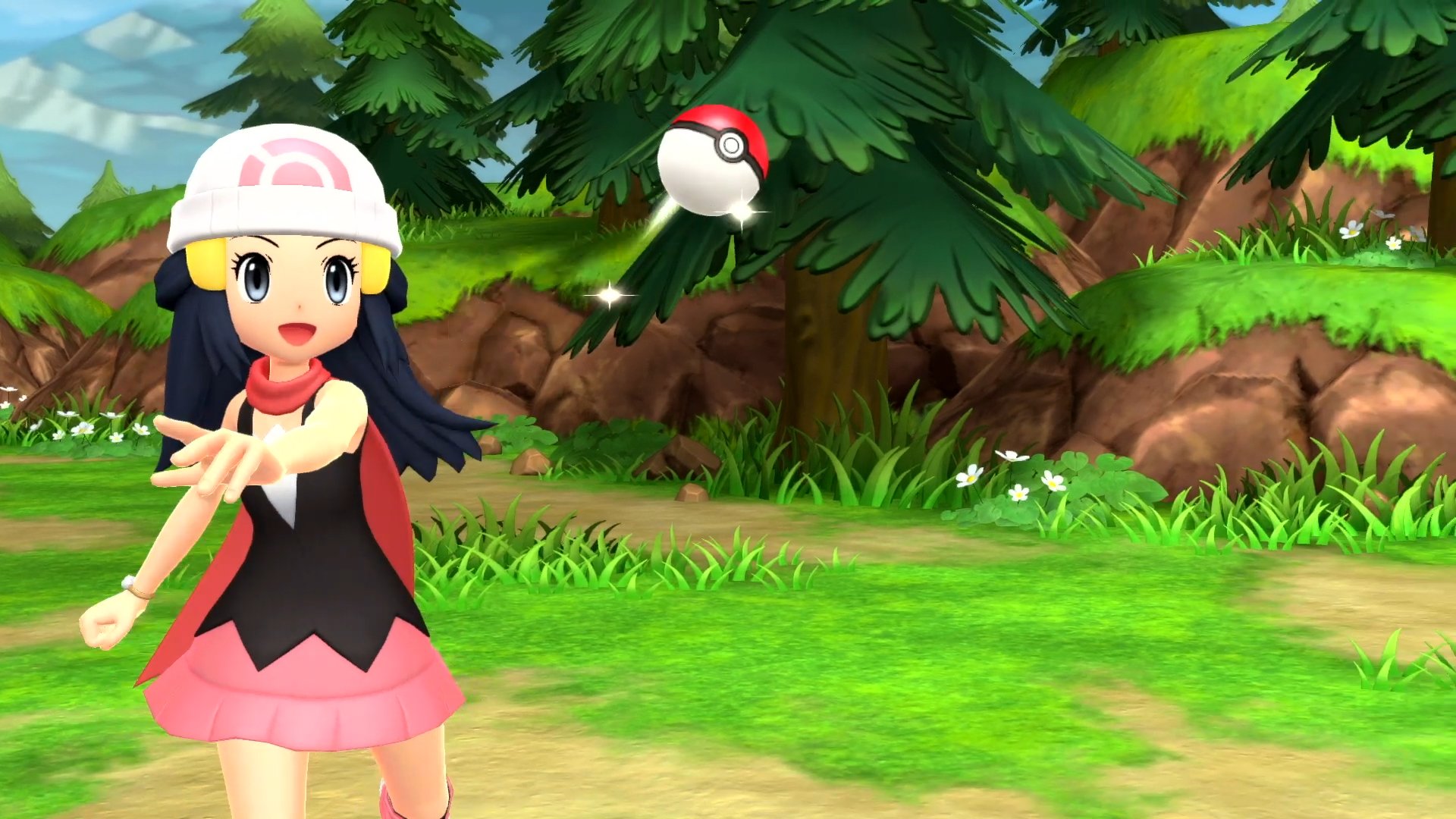 What are these games about?

Pokemon Brilliant Diamond and Pokemon Shining Pearl take players to the Sinnoh region of the Pokemon universe, where they’ll be able to embark on a quest to become the Pokemon Champion that will see them travel throughout the region and compete in a series of Gym Battles to collect Badges.

Along the way, players will be introduced to Team Galactic, a nefarious organization that they’ll need to defeat across multiple encounters.

How do you play these games?

If your family has played other role-playing games (RPGs) in the Pokemon franchise (like Pokemon Sword or Pokemon Shield), some of the major gameplay elements here will feel familiar.

When players first begin the games, they can choose to play as a boy or a girl, as well as name their character and their in-game “rival.”

From there, players will leave their hometown and travel to a variety of towns throughout the Sinnoh region. On their adventure, they’ll be able to encounter wild Pokemon that they can battle and/or capture, as well as battle against other Pokemon trainers.

The Sinnoh region features a variety of cities and other locations to visit, which have different themes and/or activities available to complete. Some towns offer Pokemon Gyms, where players can challenge a Gym Leader to a Pokemon battle for a chance to earn a Gym Badge for their collection.

Pokemon battles are turned-based, and each Pokemon has up to four moves to choose from. Each Pokemon has a “type,” such as Grass, Fire, and Electric (among many others), and this “type” determines the kinds of moves the creature will have available to use. Each “type” is particularly strong and particularly weak against one or more other types, so players can use this knowledge to their advantage to create a well-rounded team to take with them on their journey.

Players can have up to six Pokemon on their team at once, and they can move the Pokemon they’ve collected back and forth between their team and their storage boxes when they want to change things up.

After players complete a battle against a Pokemon species for the first time, the game will “remember” which types/moves are strongest and weakest against that species, and this information will be presented to players in future battles against that species. That is, players aren’t required to memorize the entire type chart to know which moves are the best in each battle. However, it may sometimes be helpful to quickly look up a chart online when you know you’re about to battle against a Gym leader that specializes in a particular Pokemon “type” (like Grass), or when you’re facing a Pokemon species you’ve never battled before.

After players defeat a Pokemon in battle, their entire team of Pokemon will earn experience points even if they didn’t compete. As Pokemon earn enough experience points over time, they can level up and become stronger. Plus, many (but not all) Pokemon can evolve into different creatures altogether.

As players make their way from one city or major area to another, they’ll travel along a series of numbered “routes,” and they may encounter different kinds of Pokemon while traveling on each one.

Instead of appearing out in the open as they do in Pokemon Sword and Pokemon Shield, wild Pokemon in Brilliant Diamond and Shining Pearl will appear at random as players explore. This means players won’t know which Pokemon they’re about to face until the battle begins. (The games’ Pokemon Hideaways are an exception to this, but we’ll talk about them in a bit.)

Some players may feel like this random encounter setup is a “step backwards” from Sword and Shield, and it can sometimes be frustrating when you’re trying to quickly make your way from one town to another and you’re repeatedly stopped by random Pokemon battles. If this becomes too much of an annoyance, players can collect and use items called “Repels” that will repel wild Pokemon for them for a limited time.

While all of these features may be familiar to longtime Pokemon fans, Pokemon Brilliant Diamond and Pokemon Shining Pearl also offer some more unique features.

For one, players can visit the sprawling Grand Underground, a series of interconnected tunnels underneath the Sinnoh region. Here, they can visit the previously mentioned Pokemon Hideaways. Each Hideaway has a theme (like a desert or volcano) that determines the kinds of Pokemon that will be found there, and some creatures are only available to encounter in these Hideaways. In a Pokemon Hideaway, players will be able to see Pokemon walking around in the area, and they can choose whether or not to battle those creatures.

Players can also try a digging mini-game in the Grand Underground to find items, as well as create a Secret Base underground that they can decorate.

Back above ground, players can enter their Pokemon into Super Contest Shows that feature a rhythm mini-game. During this mini-game, symbols will move from right to left across the screen, and players will be asked to press the “A” button each time one of these symbols reaches a certain point on the screen. The better the player’s performance in this mini-game, the higher the chance they’ll win the Super Contest Show.

Finally, in addition to all of these single-player features, Pokemon Brilliant Diamond and Pokemon Shining Pearl offer a number of multiplayer features, giving players the ability to trade Pokemon with other people, compete in Pokemon battles with other players, and more.

Are these games fun to play?

Pokemon Brilliant Diamond and Pokemon Shining Pearl offer really fun gameplay for existing Pokemon fans, and they feature a number of quality-of-life improvements when compared to the original Diamond and Pearl that make the experience more accessible (and more fun) for newcomers, younger, or more casual players.

That being said, the games aren’t designed for very young players. For one, they don’t feature voice acting. Instead, the storyline is presented through text, so players will need to be comfortable reading lots of text as they make their way through the games.\

In addition, while the games will help players by remembering which Pokemon moves are strongest and weakest against other “types” (among other helpful features), there’s still an element of strategy here that can make the games harder or easier to complete (that is, make Pokemon battles harder or easier to win), depending on how much players pay attention to “types,” how much time they spend training their Pokemon, and so on.

Putting it another way, if a youngster wants to create a team of only the “cutest” or “coolest” looking Pokemon, they may have trouble winning some battles if they don’t use any strategy and/or planning. Some youngsters may not be ready for that kind of strategic thinking, but of course, each kiddo is different!

All of that being said, slightly older kids, teens, and adults can absolutely have a blast here, and we really enjoy the games.

Are there any major differences between Pokemon Brilliant Diamond and Pokemon Shining Pearl?

There’s no right or wrong answer to the question of “which game is better,” so which game you pick up will be up to your personal preference. You can learn more about the differences between the two games in our guide.

Is there anything else parents need to know about these games?

As of this writing, Pokemon Home support isn’t available for Pokemon Brilliant Diamond and Pokemon Shining Pearl. Pokemon Home is an online storage service that allows players to store the Pokemon they’ve collected in Pokemon games safely in the cloud, as well as transfer Pokemon between games.

Pokemon Home support is expected to be added to Pokemon Brilliant Diamond and Shining Pearl in 2022.

Pokemon Brilliant Diamond and Pokemon Shining Pearl are fun Pokemon role-playing games that feature lots of welcome improvements when compared to the original Diamond and Pearl.

Whether your family is familiar with the original Pokemon Diamond and Pokemon Pearl, or you’re diving into this adventure for the first time, we recommend adding one or both of these Pokemon games to your Switch lineup.

Update (11/26/2021): This article has been updated to clarify how the games will remember which moves are strongest and weakest against different Pokemon species.

Pokemon Go Alola to Alola Event: Everything You Need to Know