Jingle All the Way: It's Turbo Time Card Game Review 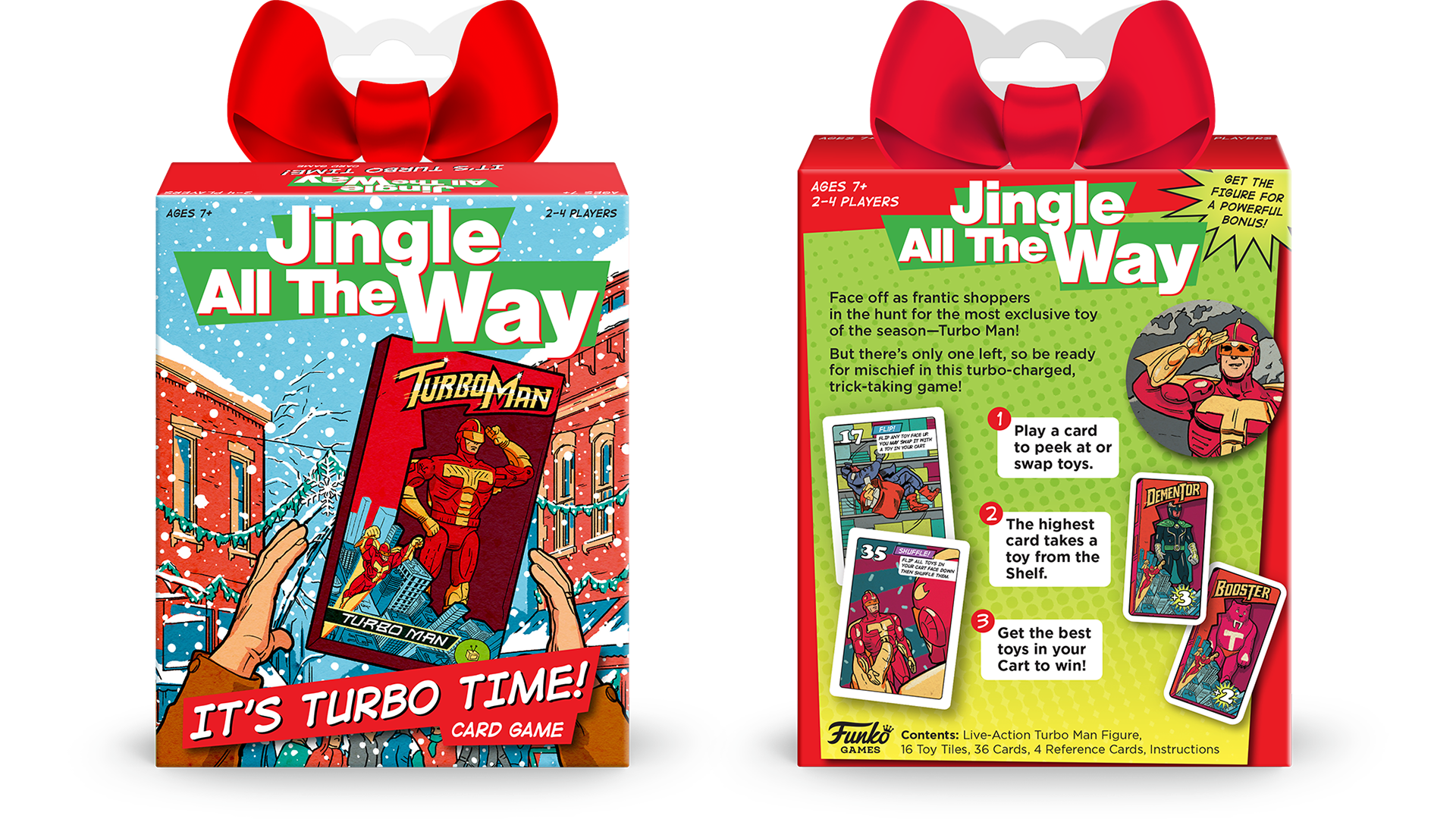 For the 2021 holiday season, Funko Games has released a series of holiday-themed tabletop games inspired by popular characters and films, such as Dr. Seuss’ How the Grinch Stole Christmas and Disney’s Chip 'n' Dale.

Another title in Funko Games’ holiday lineup is Jingle All the Way: It’s Turbo Time. We had the chance to check it out.

Jingle All the Way: It’s Turbo Time is a card game for 2-4 players with a recommended age of 7+. The game is inspired by the 1996 film Jingle All the Way, which stars Arnold Schwarzenegger and Sinbad as two fathers searching for the hottest toy of the holiday season: a Turbo Man doll.

In Jingle All the Way: It’s Turbo Time, players will compete to collect the most valuable toys from the store, including a single Turbo Man doll.

Each game of Jingle All the Way: It’s Turbo Time has an estimated play time of 20 minutes.

Jingle All the Way: It’s Turbo Time includes 16 Toy Tiles that feature characters from the fictional Turbo Man franchise (like Booster and Dementor), as well as items that reference scenes from the film (like a lottery ball). These Toy Tiles are worth various numbers of points, with the single Turbo Man Toy Tile being the most valuable. There’s also a single Toy Tile featuring a counterfeit Turbo Man doll, which will cause a player to lose points if they have it at the end of the game.

Before starting a game, each player receives a Booster Toy Tile to start their shopping carts. Then, 12 Toy Tiles are placed face-down in a 3x4 grid in the center of the table to form a “Shelf” in a store.

The game also includes a deck of 36 cards, and five are dealt to each player to form their starting hand. Each of these cards features an illustration inspired by the film, along with a number and a special “Power.”

Finally, the game includes a small Turbo Man figure which can pass between players throughout the game.

The person who played the card with the lowest number in the round takes control of the Turbo Man figure and is allowed to discard as many cards from their hand as they’d like. This player will also be the first to play a card in the next round.

This “highest to lowest” play order makes choosing which card to play in each round a strategic process, since players can decide whether to play a card with a higher or lower number based on the card(s) other people have already played. Or, they can simply play cards based on the Power they want to perform, even if it means they’ll take an action last in the round and may not be able to collect a Toy Tile (depending on the number of players).

The game ends when all of the Toy Tiles have been collected from the Shelf. At that point, players reveal all of their Toy Tiles and use the game’s scoring table to determine who collected the most valuable toys. The player with the most points wins.

Jingle All the Way: It’s Turbo Time is more complicated than many of Funko Games’ card games, and the age rating of 7+ feels a bit young since the game relies so heavily on strategic thinking and memorization.

That is, as players “peek” at Toy Tiles, they’ll be encouraged to remember which toy each Toy Tile contains, even as those Toy Tiles are swapped between the Shelf and/or other players’ carts throughout the game. In a two-player game, it’s pretty easy to remember which Toy Tile(s) you’ve viewed in the other player’s cart, but in a three- or four-player game, it would be more difficult to keep everything straight.

The game’s scoring system also means players can use strategic thinking to decide which kind(s) of toys to search for. For instance, a single Booster Toy Tile is only worth two points, but if you manage to have five or more Booster Toy Tiles in your cart at the end of the game, you earn 25 points.

Altogether, there’s a lot to keep track of here, and, again, the gameplay feels too complicated for the game’s 7+ age rating. It may even take older players some time to fully understand the game’s rules before everything clicks.

All of that being said, Jingle All the Way: It’s Turbo Time isn’t a bad game, but it didn’t blow us away either.

In addition, it’s worth pointing out that while the gameplay here focuses heavily on memorization, players are allowed to look at the face-down Toy Tiles in their own cart at any time. This should prevent players from accidentally swapping a high-value Toy Tile from their cart since they won’t have to worry about forgetting which Toy Tiles they’ve already collected.

Finally, while the game is inspired by the Jingle All the Way movie, watching the film before playing the game isn’t a requirement, though fans of the movie may enjoy the game more due to its film references.

Jingle All the Way: It’s Turbo Time allows players to practice their memorization and strategic thinking, but the game may be too complicated for younger players. In addition, while the game's theme and film references are handled well, there’s nothing particularly exciting here that makes this a must-play experience.

Jingle All the Way: It’s Turbo Time is a bargain at only $6.99, so it would make a nice stocking stuffer for older players who really enjoy the film, but it’s not a must-have.