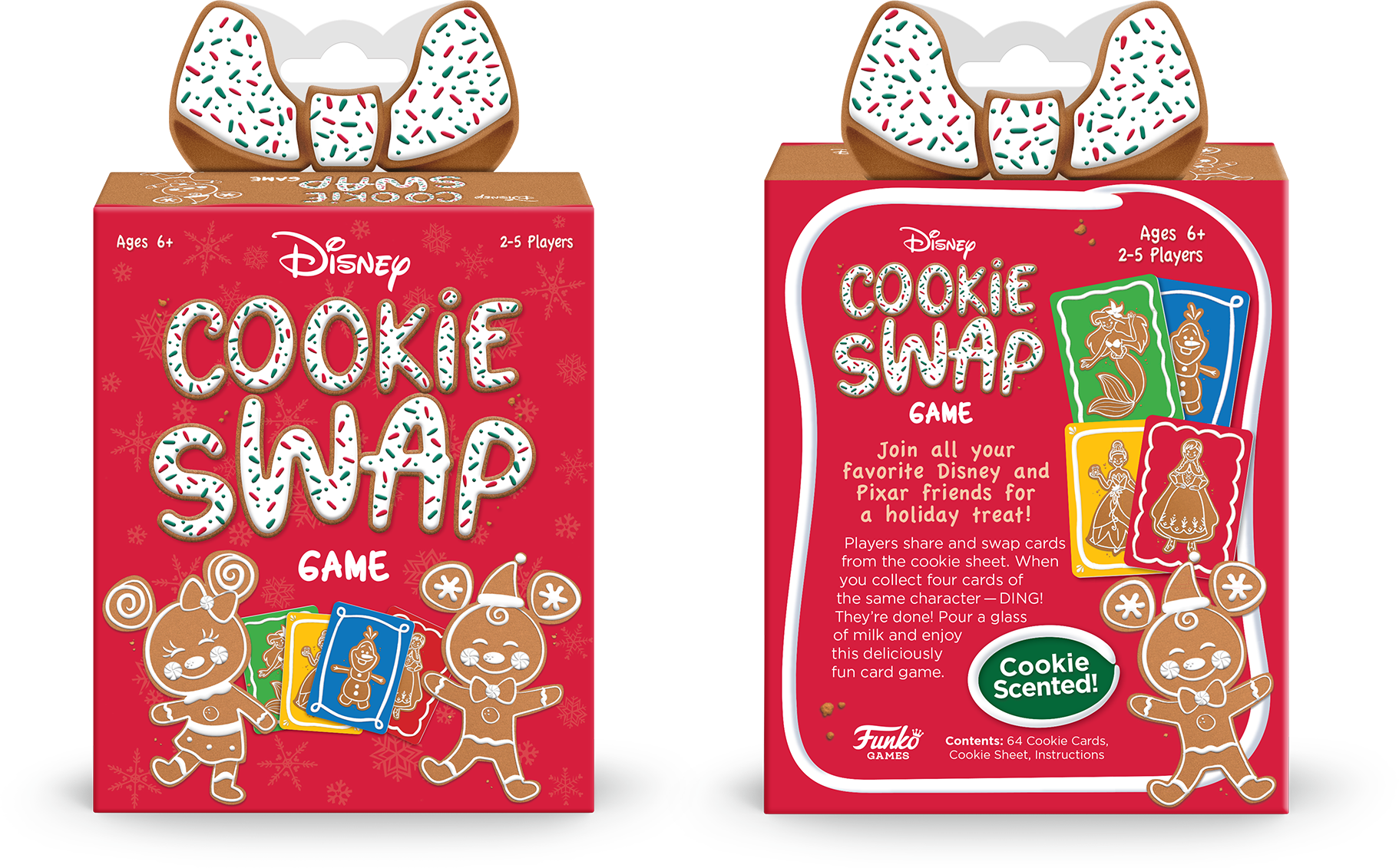 Funko Games is celebrating the 2021 holiday season in a big way with the release of holiday-themed tabletop games inspired by Dr. Seuss’ How the Grinch Stole Christmas, Disney’s The Nightmare Before Christmas, and more.

Disney Cookie Swap is a card game for 2-5 players with a recommended age of 6+. The game challenges players to collect sets of cards that feature Disney and Pixar characters designed as gingerbread cookies.

Each game has an expected play time of 20 minutes.

Disney Cookie Swap comes with a foldable “cookie sheet” board and 64 cards that feature one of 16 Disney and Pixar characters, like Minnie Mouse, Mickey Mouse, Ariel, Stitch, Buzz Lightyear, Anna, and Tiana, among others. Each character is featured on four cards with different background colors: red, green, blue, and yellow.

Once cards are removed from the deck (if this is required), the deck is shuffled and four of the remaining cards are dealt face-up on the cookie sheet board. The rest of the cards are dealt to players so that each player has three stacks of four face-down cards in front of them.

Since the goal is to create three sets of matching character cards, players can use strategic thinking to decide which character to focus on for each of their card stacks and which card(s) to discard. In some cases, players may want to move a card from one of their stacks to another stack. In order to do this, they’ll need to temporarily swap the card they need to transfer to the cookie sheet, and then hope that another player doesn’t collect that card for themselves before they have their next turn.

When players create a set of four matching character cards, they’ll lay these cards face-up in front of them and say “Ding!” to indicate the cookies are done cooking. If players swap a card but still don’t have a complete character set, they’ll need to place the cards back down in front of them face-down. This means players will need to remember which cards are in each of their stacks as they play.

The Disney Cookie Swap card game has really simple gameplay that’s easy to understand and dive right into. While the game isn’t very complicated, it’s a fun experience that reminds us of titles like Rummy, since you’re working to create sets of cards, and you may inadvertently wind up competing with another player for the same ones (for instance, two players may want to collect the Pluto cards). If this happens, one player will eventually need to “give up” and switch to another character if they hope to win the game.

There’s also an element of chance here, since players may receive two or three matching character cards in a stack from the beginning of the game. If that happens, the decision for which cards to collect may be made for them, so they may have to think less strategically to complete their stack(s).

Disney Cookie Swap doesn’t feature any text or numbers to read or match. It only requires players to collect cards featuring the same characters. This means it should be pretty easy for youngsters to play. In addition, while the characters are represented as brown cookies with white icing, there are still enough details in each character to tell them apart. The only potential exceptions to this are Minnie Mouse and Mickey Mouse, who look pretty similar, but not identical.

In addition, the game features a “cookie scented” cookie sheet, though the scent isn’t very strong, and it smells more generally "sweet" and even "citrusy" than like a traditional "cookie" scent. We only smelled the scent when placing the cookie sheet board right against our nose. Whether this is a good or bad thing will depend on whether or not you want the game to have a smell at all.

Finally, as with many of Funko Games’ titles, the Disney Cookie Swap game is a customizable experience. In fact, the game lists a few optional tweaks in the instruction booklet. For instance, if you’re playing with only two or three people and you’d like a longer game, you can require each player to collect four or more sets of matching character cards, rather than the standard requirement of three. You can also make the game easier for younger players by requiring them to complete less sets than adults.

Or, if you’d like a faster-paced game, you can allow players to swap cards on the cookie sheet simultaneously, rather than requiring players to take turns. This would turn the experience into a fast-paced race, but the goal of collecting matching character cards would remain the same.

The Disney Cookie Swap card game is one of Funko Games’ simpler titles, but that’s not a bad thing. After all, it’s sometimes nice to take a break from the more complicated games that require methodical planning and strategy.

Plus, the Disney Cookie Swap card game features adorable, holiday-themed artwork and is priced at just $6.99, so it would make it a great stocking stuffer this holiday season.

We recommend checking this one out!