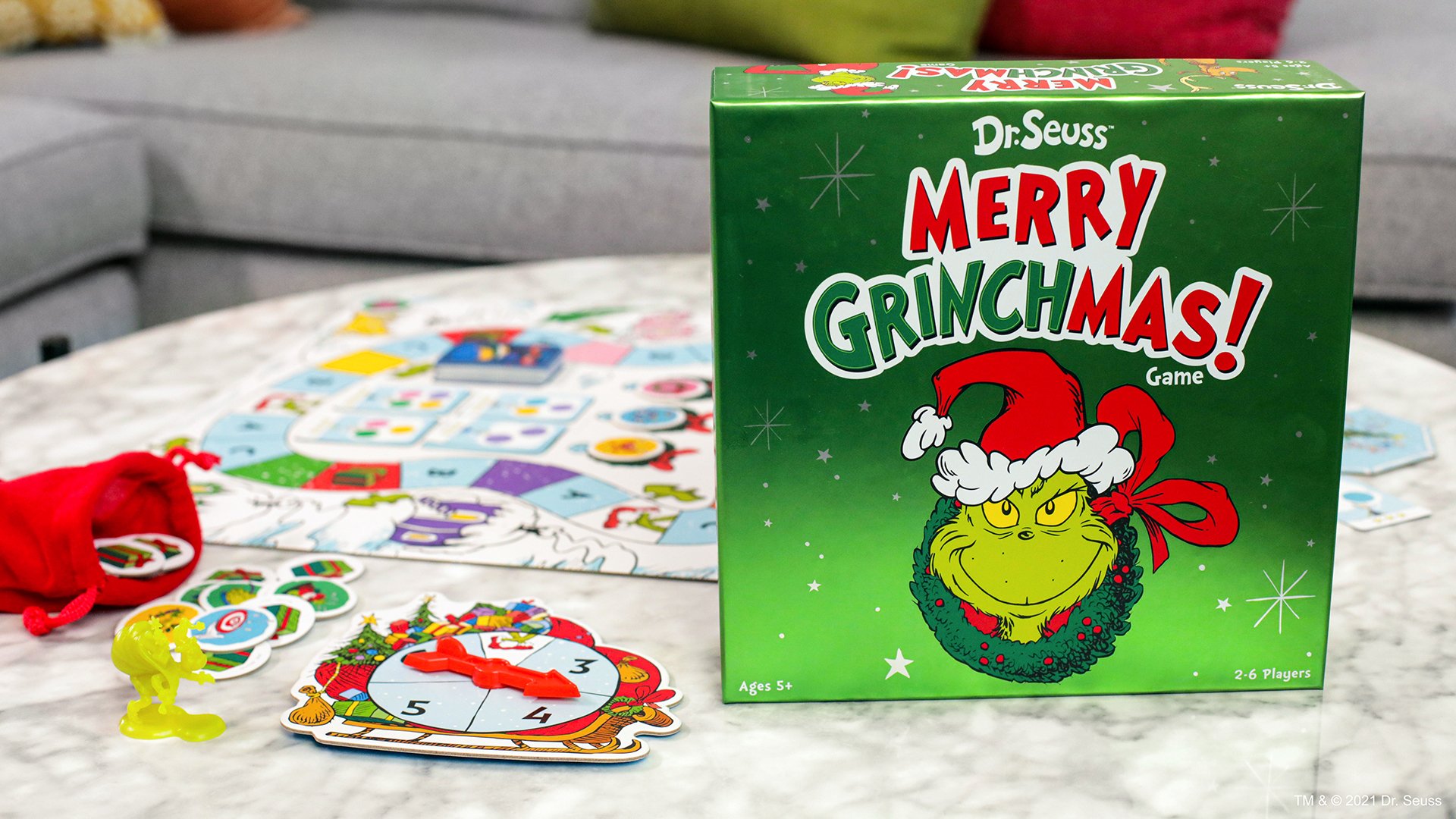 We’ve already reviewed the Dr. Seuss Grinch Grow Your Heart Card Game here at SuperParent (and we loved it), and now, we’re here to take a look at the Dr. Seuss Merry Grinchmas Game.

The Dr. Seuss Merry Grinchmas Game is for 2-6 players with a recommended age of 5+. It challenges players to work together as the Whos to stop the Grinch from stealing presents and other items from the Whos’ homes on Christmas Eve.

Each game has an expected play time of 30 minutes.

The Dr. Seuss Merry Grinchmas Game includes a square game board, 36 Wish Cards, 50 Present Tokens, a cloth bag to hold the Present Tokens, a Grinch mover, a spinner, and a Town Center Tile with a picture of the large Christmas tree in the center of Who-ville.

Before a game begins, players must shuffle the Wish Cards and place four face-up Wish Cards on the associated spaces on the game board. Each player will choose one of the Whos’ homes on the board to call their own, and players will place a random Present Token on every house that isn’t chosen by a player (in a six-player game, this step is skipped).

Finally, players will need to place three random Present Tokens on the wreaths labeled A, B, and C near the top of the game board. Then, the game can begin.

On each turn, the active player will perform actions as both the Grinch and the Whos. To start, they’ll spin the spinner, which determines how many spaces the Grinch will move around the board. The Grinch will steal 0-3 presents from the Whos on each turn, depending on the space he lands on.

From there, players need to determine if the Grinch has collected enough Present Tokens across one or more turns to match one of the Wish Cards that’s face-up on the board.

To be specific, each Present Token has a colorful background in colors like pink, yellow, and green, among others. These colors correspond to symbols on the game’s Wish Cards, which tell players the kinds of Present Tokens they’ll need to acquire before they can collect them.

As an example, a Wish Card may have one pink circle, one green circle, and one purple circle. If players can collect Present Tokens matching those colors, they can collect the Wish Card.

Each Wish Card is worth up to five points, and the goal is for players to help the Whos collect the same number of points or more points than the Grinch before the game ends.

If the Grinch has collected enough Present Tokens to take a Wish Card on his turn, it’s placed in the Grinch’s pile in the corner of the board. If not, the Grinch’s turn is over and the active player can take their action as the Whos.

When playing as the Whos, the player can collect one of the three Present Tokens on the wreaths on the board (if the Grinch hasn’t already stolen them for that turn) or take a random Present Token from the cloth bag.

Then, if they have the necessary Present Tokens to collect a Wish Card, they have the option to collect it and place it around the Town Center tile, but they don’t have to, which adds a major strategic element to the game.

That is, the game will end once the Whos have collected eight Wish Cards. It doesn’t matter how many Wish Cards the Grinch collects -- the only thing that matters is whether players have collected the same number of points or more points than the Grinch when all is said and done.

Players can also use strategic thinking to try and sabotage the Grinch by taking Present Tokens that he may need in order to collect a Wish Card on his next turn.

We liked the Dr. Seuss Merry Grinchmas Game, but the experience does feel a bit unfair if you’re playing with just two people. That is, during our first try at the game, we attempted to play strategically and save our Present Tokens in order to only collect Wish Cards worth a high number of points.

However, this meant we collected Wish Cards quite slowly (since only two people were collecting Present Tokens), and the Grinch ended up accumulating more and winning the game.

On our second try, we worked as quickly as possible to collect the first eight Wish Cards that became available to us. In this case, the Grinch had less time to collect Wish Cards, and we ended up earning more points and winning the game.

While we didn’t play the Dr. Seuss Merry Grinchmas Game with three-or-more people, we can assume that the game would be easier to win with more people available to collect Present Tokens. Even so, the game is still fun to play with just two people. (It’s also worth pointing out that in a 5- or 6-player game, players receive the ability to exchange Present Tokens with one another when playing as the Whos).

Since the Present Tokens and Wish Cards use color-coded artwork, rather than text, the game doesn’t require players to know how to read (they only need to be able to recognize the letters A, B, and C). This setup will allow littles to practice their color recognition and color matching as they try to collect Present Tokens that match the symbols on the Wish Cards.

Plus, since the game is played cooperatively, older players can help youngsters make the best strategic decisions to help the Whos win the game.

Finally, we do have a minor complaint about the game’s cloth bag. It’s rather small, given the number of Present Tokens in the game (50). We found it difficult to adequately mix up the Tokens within the bag, but, again, this shouldn’t be as big of an issue in a game with more players, since more Tokens will be in use at any one time, rather than being in the bag.

Dr. Seuss Merry Grinchmas Game combines elements of chance (like the game’s spinner and the Present Token draw bag) with real strategic thinking to create a fun experience for families.

While we’re disappointed by the seemingly stacked difficulty in a two-player game, we easily overcame this obstacle by changing our strategy and playing the game in a different way. Plus, families can customize the game to make it easier by allowing players to exchange presents even if less than five players are at the table.

All told, we recommend checking out the Dr. Seuss Merry Grinchmas Game if you’re looking for a festive addition to your family game nights this holiday season.

The Dr. Seuss Merry Grinchmas Game is now available exclusively at Target for $19.99.