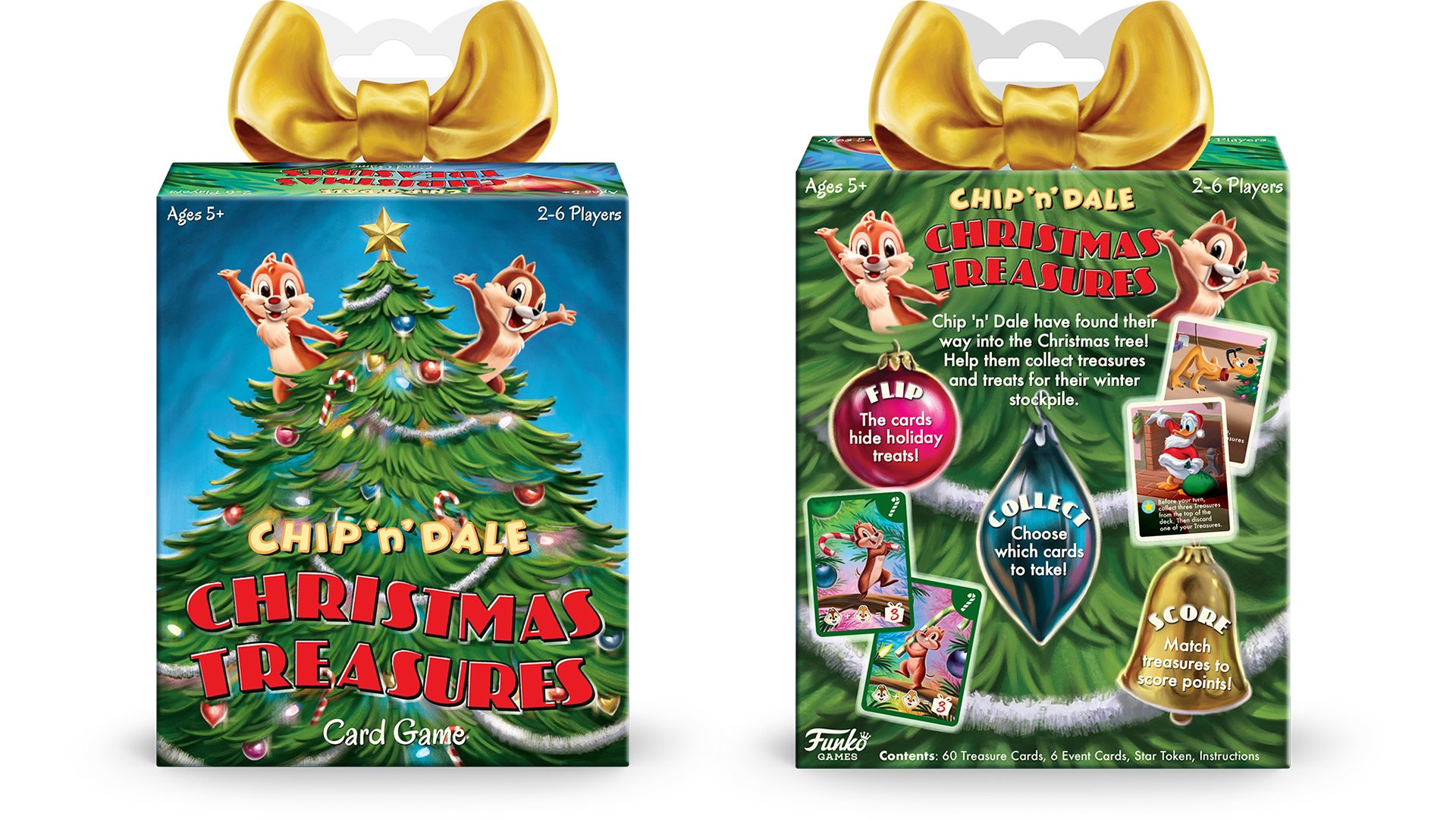 Chip ‘n’ Dale Christmas Treasures is one of Funko Games’ new holiday-themed tabletop games for 2021. We had the chance to check it out.

Chip ‘n’ Dale Christmas Treasures is a Disney-themed card game inspired by Disney’s Christmas cartoons from the 1950s, like the Pluto’s Christmas Tree cartoon from 1952. (In this cartoon, Mickey Mouse brings home a Christmas tree that Chip ‘n’ Dale are inside, though Mickey doesn’t know it. Pluto discovers the chipmunks inside the tree and shenanigans ensue.)

In the Chip ‘n’ Dale Christmas Treasures card game, players will collect cards containing beautiful artwork of Chip ‘n’ Dale who are inside the Christmas tree, with the goal being to have the most points at the end of the game.

The Chip ‘n’ Dale Christmas Treasures card game is for 2-6 players with a recommended age of 5+. Each game has an estimated play time of 20 minutes.

The game includes 60 Treasure Cards, which contain artwork of Chip and/or Dale on the front and a Christmas tree pattern on the back. Before the game begins, players will deal six of these cards face down in a pyramid/tree pattern to create a small Christmas tree on the table. The game also features a Star Token that’s placed “on top” of the tree, as well as six Event Cards.

At the beginning of each round, players will flip over the top Event Card and carry out its instructions. Some Event Cards must be acted on immediately, while others must be carried out by each player individually on their turn (in these cases, the Star Token is passed around the table as each player takes their turn to indicate whose turn it is to carry out the Event Card instructions). The Event Cards are numbered, so the same events will always occur in the same order in each game (in a 4-6 player game, some of the Event Cards are removed and the game is played over fewer rounds).

Once the Event Card has been played, the first player can begin flipping over Treasure Cards in the tree to reveal the Chip ‘n’ Dale artwork underneath. Players can flip over as many cards as they want, until they find two cards they want to collect, or until they reveal cards containing a total of three Pluto symbols. If they reveal three Pluto symbols, Pluto has caught players in the tree and they must stop flipping Treasure Cards.

If players stopped flipping voluntarily, they can take up to two of the cards they flipped over and place them in front of them on the table. If Pluto caught them, they can only collect one. Once they collect their card(s), any cards they flipped over but didn’t collect are flipped back over (players are encouraged to remember what was on each card), and new Treasure Cards are played face down from the deck to fill in the empty space(s) in the tree. Then, the next player can take their turn.

The Treasure Cards come in five suits: Ornaments, Candy Canes, Popcorn, Acorns, and Bells. Different cards and combinations of cards are worth varying numbers of points, and each card has its scoring requirement and point value at the bottom so it’s easy to keep track of how many points each one is worth.

Acorn cards are worth a single point, Bell cards are worth two, and if players can collect three Popcorn cards across multiple turns, they’ll earn five points at the end of the game. The two other suits -- Candy Canes and Ornaments -- require players to collect one card each featuring Chip and Dale. For instance, if players collect one Ornament card featuring Chip and one Ornament card featuring Dale, the pair of cards will be worth three points at the end of the game. A qualifying pair of Candy Cane cards is also worth three points.

Chip ‘n’ Dale Christmas Treasures has really simple gameplay, but the different scoring rules add some entertaining strategy to the experience. That is, players will need to use strategic thinking to decide which Treasure Cards to collect from the tree on each turn. For instance, will you collect Bell and Acorn cards that are instantly worth points (that is, they don’t require you to collect multiple cards of the same suit)? Or, will you take the risk and try to earn more points by only collecting Popcorn cards, knowing that if you don’t collect three of these cards, you won’t earn any points at all?

While this level of strategic thinking should be fine for older players and adults, younger players may have trouble keeping track of all of the scoring combinations and deciding which move is most advantageous on each turn (though having the scoring details on the bottom of each card is really helpful, even for adults). If this is a concern for your family, you can consider playing the game as teams, with an older child or adult playing alongside a youngster to help them make decisions.

Finally, the game can help kids practice their addition when the scores are added up at the end of the game.

Chip ‘n’ Dale Christmas Treasures is an adorable card game with some of the best artwork we’ve ever seen in a tabletop game. It’s also a cute, entertaining experience with simple gameplay that’s quick to understand and jump into.

While the focus on strategic thinking may make it a bit too complicated for younger players, the experience can be customized so that kiddos can receive help from older kids and adults if and when they need it.

All told, this is one of the cutest card games we’ve played, and it would make a great stocking stuffer or family activity this holiday season.

The Chip ‘n’ Dale Christmas Treasures card game will be released later this year for $6.99. It’s available to pre-order now at Entertainment Earth.