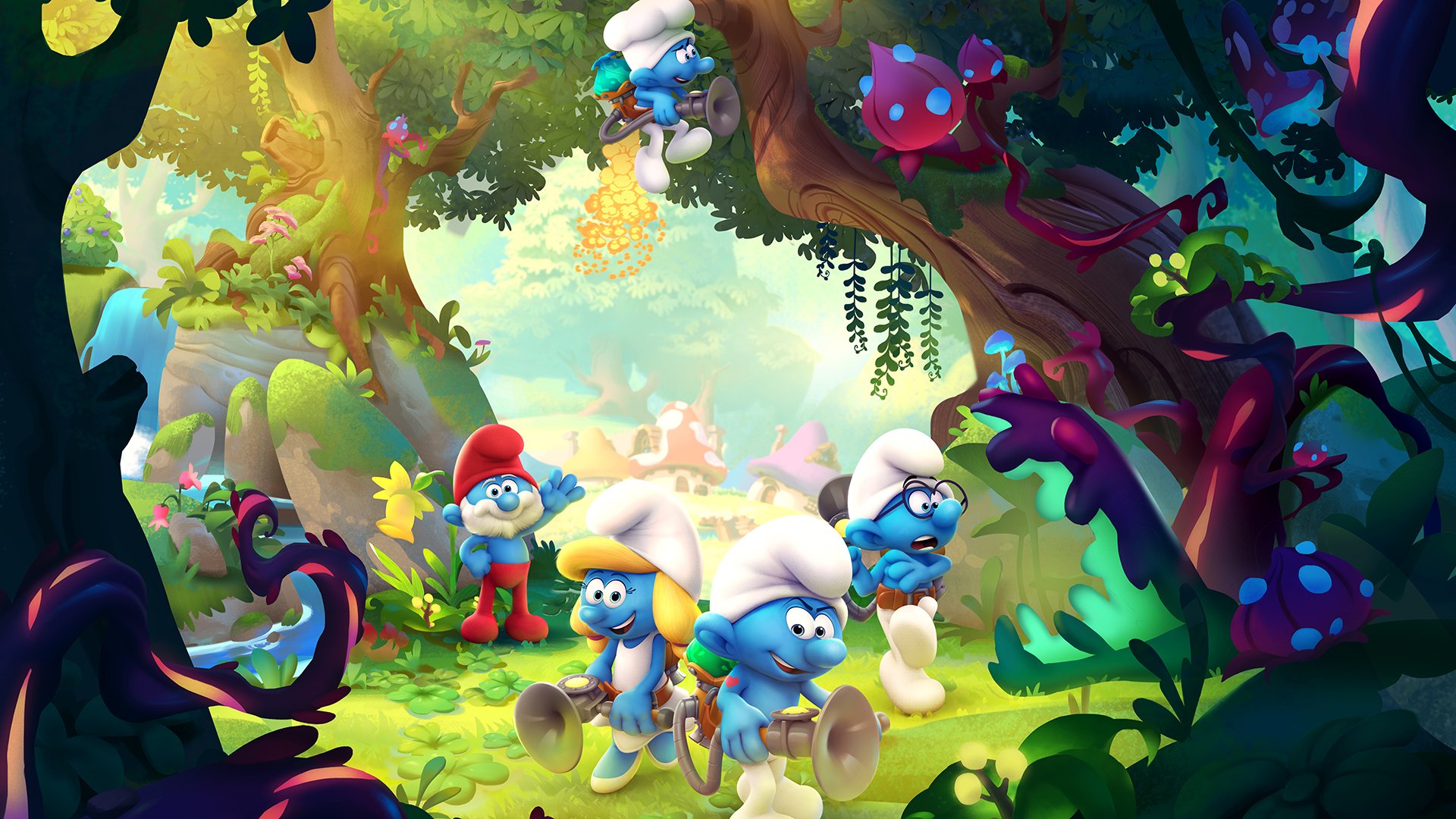 The Smurfs: Mission Vileaf is now available on PC, and it’s coming soon to consoles. The game is inspired by the classic animated franchise The Smurfs.

We checked out the Switch, PlayStation 4, and Xbox One versions of the game.

What’s The Smurfs: Mission Vileaf about?

In The Smurfs: Mission Vileaf, Gargamel has released a toxic plant known as the Vileaf into the Smurf’s world. The Vileaf has spread contamination throughout the in-game world, and it’s also created dangerous Viletraps that have captured some of the Smurfs.

Players will need to help Papa Smurf and four playable characters (Hefty Smurf, Brainy Smurf, Chef Smurf, and Smurfette) rescue the trapped Smurfs, create an antidote for the contamination, heal contaminated plants, and defeat the Vileleaf before it’s too late.

The Smurfs: Mission Vileaf is a 3D platformer that challenges players to jump on and over platforms, avoid gaps in the path, defeat or avoid enemies, and more as they explore different environments, such as a dam, a human castle, and a swamp. While most of the game features fairly open areas to explore, there are instances where the game becomes more like a side-scroller, with players navigating narrow paths by moving from left to right or right to left across the screen.

Players are equipped with a handy tool called the Smurfizer, which they can “shoot” at contaminated plants to heal them. Contaminated plants are purple and pink, so they stand out well when compared to healthy plants.

Rather than working like a gun, the Smurfizer is more like a water hose that’s connected to a tank on the Smurf’s back. The Smurfizer has a limited capacity of healing spray, meaning players can only shoot it for a few seconds before the spray is depleted. However, the Smurfizer refills quickly and automatically, and players aren’t required to collect any sort of ammo, unless they’re using the Smurfizer to glide or charge.

At the beginning of the game, the Smurfizer can only be used to shoot a healing spray at contaminated plants. As players progress, they’ll unlock upgrades for the tool that allow them to use it to glide over large gaps in the path, charge forward with a quick boost of speed, and even vacuum up items.

The game’s environments become more complex as players progress to incorporate these different abilities. For instance, the castle level features lots of moments where players need to use the Smurfizer to glide over large gaps in the path. In these kinds of instances, the game places orbs in the path that will recharge the Smurfizer so players will have enough energy to make it through each area.

The game’s combat also becomes more complicated as players progress. There are multiple varieties of enemies to defeat. Some can be defeated by simply shooting them with the healing spray. Others are perched on top of a wooden pole that you’ll need to break before they’re defeated, and so on. In some cases, players can avoid battling and simply run past enemies, but in others, they’ll become locked in a small area until all of the enemies have been defeated.

The Smurfs: Mission Vileaf is designed for younger players, but some of the game’s battle encounters are surprisingly challenging, with lots of enemies in small areas. The game features three difficulty settings so kids can choose the one that suits their playstyle, and this can be changed in the middle of the game. The game also features an “auto-aim” function that causes the Smurfizer to automatically aim at nearby enemies.

While we appreciate the inclusion of the auto-aim feature, some enemies move or jump around really quickly, which can cause your Smurf to move erratically after the Smurfizer locks onto them. This is jarring, but players may get used to it as this happens over the full length of the game. Players can also turn the auto-aim feature off in the game's menu, though, as you might expect, we found that aiming became more difficult when the feature was turned off.

As players take damage or fall into pits and gaps in the path, they’ll lose part of their health. This health can be recharged by breaking crates that are scattered frequently throughout each area. If players take enough damage without healing, they can technically die, though when this happens, they can quickly respawn at a nearby checkpoint and try again.

The Smurfs: Mission Vileaf features a variety of hidden collectibles that players can search for in each environment. These collectibles can be used alongside the game’s currency (currency is earned by healing plants) to purchase extra upgrades for the Smurfizer and the Smurfs characters, including extra health.

Finally, the game supports local cooperative multiplayer for two players in the same room. When players are working together, the second player becomes a small flying robot that can heal contaminated plants and enemies, as well as drop explosive seeds.

The Smurfs: Mission Vileaf is a cute 3D platformer, and it’s really fun to find all of the contaminated plants and heal them. That being said, the game does have a number of issues that stop it from being perfect.

For one, the game features some frustrating platforming sections that focus on quickly moving through environments or timing your jumps to land on moving platforms. There are also some environments where you’re surrounded by so many obstacles and/or enemies that it seems impossible not to take damage, which feels unfair.

In addition, two of the playable characters aren’t very likable. Specifically, Hefty Smurf and Brainy Smurf are both quite egotistical, and Brainy Smurf is also sarcastic and even rude to the other Smurfs. According to the Smurfs Wiki, this is similar to Brainy’s personality in the overall Smurfs franchise, but we wish these traits were turned down a few notches. As it is, we really didn’t enjoy playing as Brainy, and he’s definitely not a great role-model in a game designed for younger players.

The Smurfs: Mission Vileaf features voice acting and subtitles, so players aren’t required to know how to read to follow along with the main story.

However, parents should know that the Smurfs use the word “smurf” frequently in their vocabulary by replacing verbs and nouns with the word “smurf.” The word “smurf” is also used in the exclamation “Holy Smurf!” We had no problem understanding what the dialog was referencing when the word “smurf” was used in place of other words, but this may not be the case for younger players.

In addition, parents should know that some of the Smurfs characters, like Wild and Dimwitty, are inspired by uncomfortable stereotypes (Wild Smurf is similar to a caveman character).

Finally, the Switch version of the game suffers from frequent lag, which means the game will temporarily stutter or slow down as players complete actions. When we tested the PlayStation 4 and Xbox One versions of the game, we didn’t encounter any lag.

The Smurfs: Mission Vileaf has great potential, and the basic gameplay of using the Smurfizer to clear the corruption and heal the land is quite fun. However, the game falls short of being truly great due to a few technical issues and some bothersome characters.

With the frequent lag on Switch, we can’t recommend picking up the Switch version of the game if you have another console available. If the Switch is your family’s only system, we can only recommend The Smurfs: Mission Vileaf if you’re comfortable overlooking the game’s issues.

The PlayStation 4 and Xbox One versions are easier to recommend, since they don’t suffer from the same technical issues as the Switch version, but we’re still bothered by Hefty’s and Brainy’s personalities, as well as some of the environments where the difficulty temporarily spikes to an unfair level.

All told, while The Smurfs: Mission Vileaf has one-too-many problems to earn our total recommendation, there’s still some fun to be had here.

Disclosure: SuperParent received The Smurfs: Mission Vileaf on Switch, PlayStation 4, and Xbox One for coverage purposes.