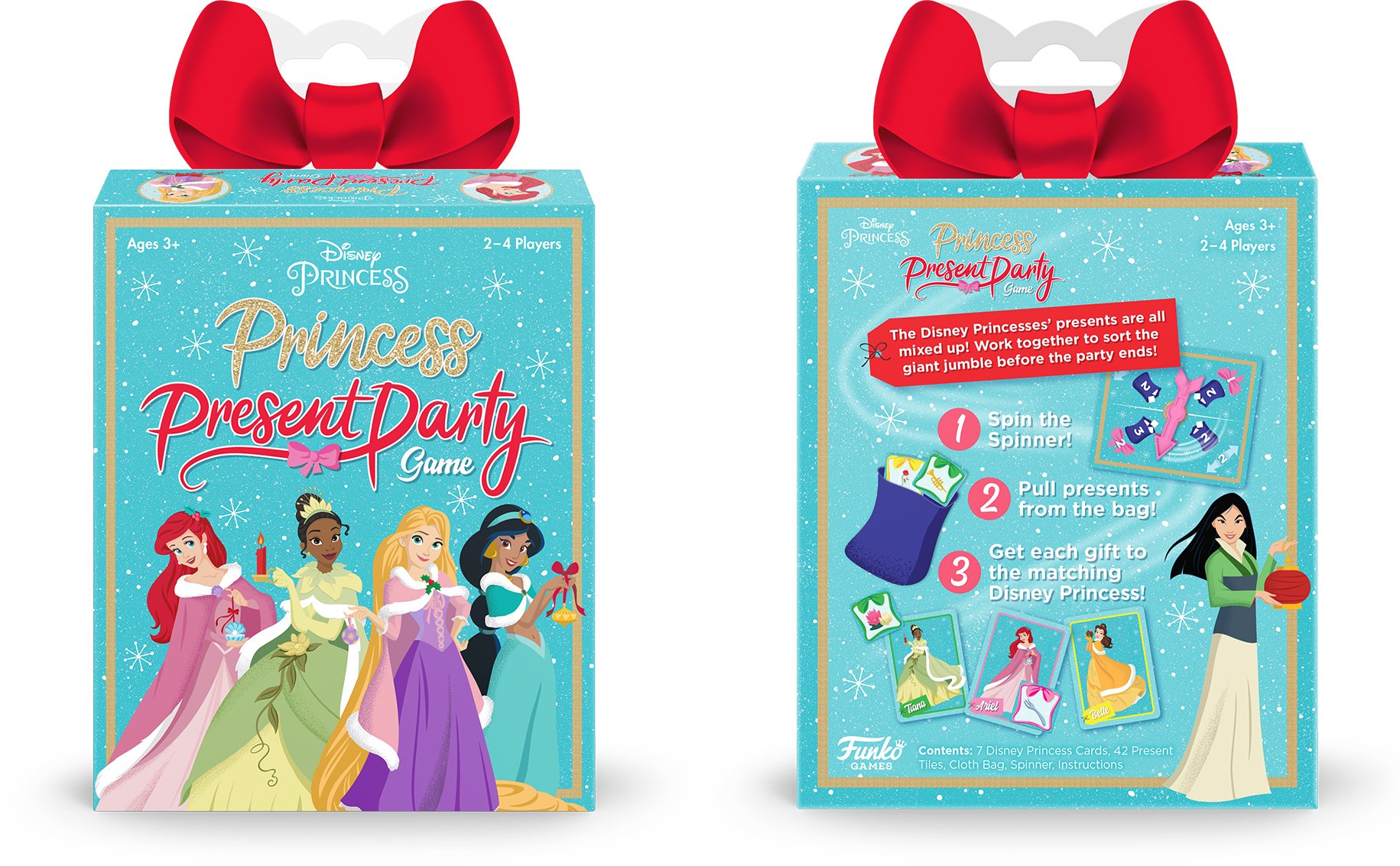 Funko Games is celebrating the 2021 holiday season with the release of multiple Christmas-themed cards games inspired by Disney characters and films, including Mickey Mouse and his friends and Chip 'n' Dale.

Funko Games’ holiday lineup also includes the Disney Princess Present Party Game, which we had the chance to check out.

The Disney Princess Present Party Game is for 2-4 players with a recommended age of 3+. The game has an expected play time of 20 minutes.

In each game of the Disney Princess Present Party Game, players will work together to try and collect the correct presents for each Disney Princess before all of the presents have been collected.

Before the game begins, each player will choose one of seven Disney Princess cards and place it in front of them. The game features Jasmine, Belle, Rapunzel, Cinderella, Mulan, Tiana, and Ariel.

Each Disney Princess is associated with six colored present tiles that feature items related to the character (for instance, there’s a frying pan for Rapunzel and the magic mirror for Belle). Each present tile has a colored border that matches the color on the Princess’ card (for instance, Mulan is associated with the color red). This means players aren’t required to be familiar with each of the films and items in the game -- they can just match the colors (a picture of the matching Princess is also on the back of each present tile).

Players will place the present tiles matching the Princesses they chose in a cloth bag that comes with the game. Then, they’ll randomly choose 10 of the remaining presents and place those in the bag as well. Once they shake the bag to mix up the tiles, each player will draw one present from the bag to give them a starting point. Then, the game can begin.

On each turn, a player will spin the spinner, which will land on one of four spaces. These spaces will tell players how many presents they need to collect from the bag, as well as how many presents they need to exchange. That is, players will always be required to collect two or three presents from the bag on each turn, but their second action will be randomly decided by the spinner.

If the spinner lands on a space with a numbered arrow symbol (the number will either be “1” or “2”), they’ll need to exchange that number of presents with one or more players. If players land on the space with the number “2,” they can exchange both presents with a single player or trade with two different players.

If the spinner lands on the numbered bow symbol (it will have the number “1” or “2”), they’ll need to give that number of presents to one or more players. Similar to the arrows, if players land on the bow with the number “2” on it, they’ll have the option to give both presents to a single player or to give one present to two different players.

The object of the game is to make sure each player has at least four of the six presents matching their Disney Princess in front of them before the game ends. Since players are working together, they can communicate freely during each turn to decide which presents should be exchanged and given away to reach this goal as quickly as possible.

Early on in the game, when players don’t have many presents in front of them, players may need to exchange presents they really want to keep based on what the spinner says. At the same time, if players reach a point where they only have presents matching their Princess in front of them, they aren’t required to trade them away on their turn.

When the last present is drawn from the bag, that player will complete their turn as they normally would. Then, everyone else will have one final chance to swap one present with another player and/or give one present to someone else (but they aren’t required to). After that, everyone will either win or lose together. If everyone has collected at least four of the presents matching their Disney Princess, the group wins! However, if even one player doesn’t have at least four of the presents they need in front of them when the game ends, everyone loses.

The Disney Princess Present Party Game has incredibly simple gameplay, which focuses more on luck and obvious moves than strategic thinking. That is, if players draw a present that another player needs for their Princess, they’ll want to give that present to their teammate as soon as they can, rather than holding onto it.

With such simple gameplay, the Disney Princess Present Party Game feels more appropriate for very little kids, rather than older kids, teens, and adults, who may lose interest after a few games.

While the Disney Princess Present Party Game is likely too simple for many players, it’s still a cute experience that would be a nice option for introducing very young players to tabletop gaming.

Plus, we love that the game allows littles to practice concepts like color recognition and item matching.

Even though we can’t recommend the Disney Princess Present Party Game to all gamers this holiday season, it would make a cute stocking stuffer for a very young person in your life.

The Disney Princess Present Party Game will be released in late 2021 for $6.99.