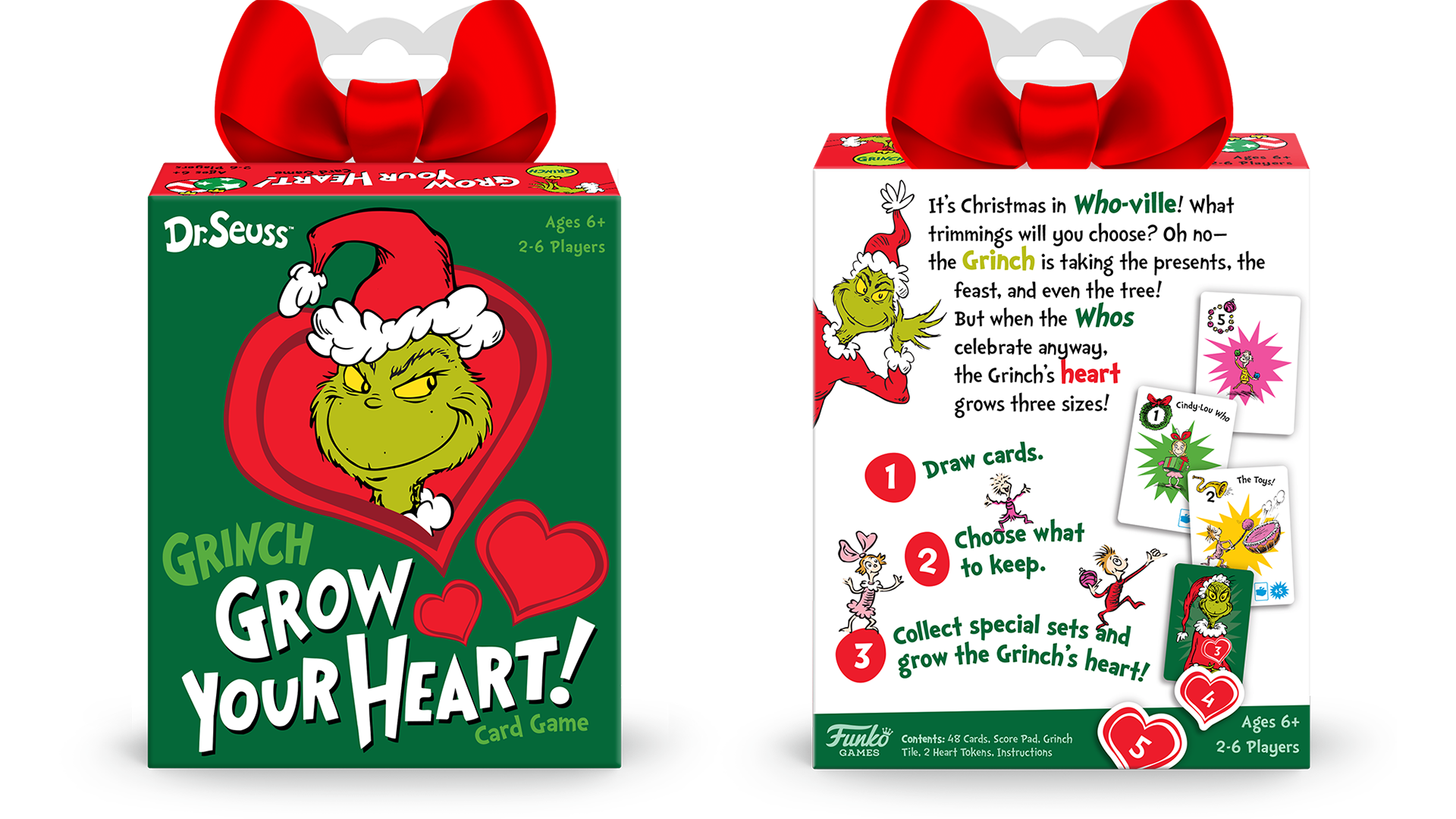 Funko Games will celebrate the 2021 holiday season with the release of several Christmas-themed card games, including the Dr. Seuss Grinch Grow Your Heart Card Game.

The Dr. Seuss Grinch Grow Your Heart Card Game is inspired by Dr. Seuss’ How the Grinch Stole Christmas. The game challenges players to collect musical instruments, ornaments, wreaths, and more to earn points, with one player acting as the Grinch in each round.

The Grow Your Heart Card Game is for 2-6 players ages 6+, and it has an expected run time of 30 minutes.

The Grow Your Heart Card Game is similar to the classic game of Yahtzee, but it’s played with cards instead of dice, and the scoring categories have been changed to match the Christmas theme.

Each card is numbered 1-6 and comes in one of four suits: ornaments, wreaths, presents, and noise (musical instruments).

In each round of the game, one player becomes the Grinch and the other player(s) become the Whos. Each round gives players three turns to create the best hand of five cards possible in order to match one of the game’s scoring categories.

Players begin each round with two cards in their hand. On their turns, the “Who” characters will draw two cards from the draw pile in the center of the table, and they’ll need to discard a card from their hand to a personal discard pile in front of them to end their turn.

Players can keep track of each round’s progression using the game’s Grinch Tile and Heart Tokens, which are placed in front of the current Grinch character in every round. The Grinch starts out with a heart value of “3,” which represents the three cards players should have in their hands at the end of the first turn.

Before the second and third turns begin, the Grinch player places one of the Heart Tokens on top of the heart on the Grinch Tile. These Heart Tokens are numbered “4” and “5,” and each one is bigger than the last to represent Grinch’s heart growing in size, just how it does in the animated film. (At the end of the round, the next player around the table becomes the Grinch so that everyone will have the chance to play as this character.)

There are four scoring categories related to each of the card suits in the Grow Your Heart Card Game. These challenge players to earn as many points as possible by collecting valuable Wreath cards or Noise cards, as examples.

There’s also a single category for three, four, or five of a kind, and another category for small and large straights (called “Runs” here). Depending on the hand you create, you’ll earn a different number of base points for matching number and straight categories.

Finally, there’s a “Rainbow” category that’s like the “Chance” category in Yahtzee. It allows players to earn points based on the highest-value card of each suit in their hand.

If players are trying to create a hand matching a specific category but they fail, it’s possible they may need to take “0” points for the round, depending on the categories they’ve already completed.

When players have completed the required number of rounds (or all seven rounds, if they decide to play a longer game), each player’s points are added together and the player with the most points wins.

We really enjoy Yahtzee, and, similarly, we had a blast playing the Grow Your Heart Card Game (it should be noted we played all seven rounds). However, you don’t have to be familiar with Yahtzee to jump right in and enjoy this game as well.

It may take a moment for players to wrap their heads around the different scoring categories, and the game requires lots of strategic thinking, especially in the first few rounds when there are so many scoring categories to choose from and you’ll need to decide which one(s) to go after. Once you have fewer scoring categories remaining, the gameplay becomes a bit simpler and quicker, since you have less options available.

While the Grow Your Heart Card Game has an age rating of 6+, this feels a bit young to us, given the game’s focus on strategic thinking and the inclusion of bonus point cards. That is, the base gameplay of drawing and discarding cards is fairly simple, but younger kids may have trouble maximizing each hand to earn as many points as possible. That being the case, we feel a slightly older age rating would be more appropriate.

If your family finds that some younger players are having trouble understanding the game’s rules or scoring categories, you can switch things up and play in teams, with an older child or adult playing alongside a youngster to help them make the most of each hand.

The Dr. Seuss Grinch Grow Your Heart Card Game comes with a tablet of double-sided scoring papers, but you’ll need to provide your own writing utensil(s) for keeping track of the current score.

The game includes quite a few scoring papers, but if you need more, you can scan an unused sheet into your computer and print as many as you need. You’ll also be able to visit the Funko Games website to download and print more, but this option isn’t yet available as of this writing.

Finally, while the outside of the game's box features a large bow, this is part of the game's plastic packaging, and it's not connected to the box itself (it can be thrown away). This means the box is easy to store alongside other games you may have in your collection.

From card games to traditional board games, we’ve played lots of titles from Funko Games here at SuperParent, but the Dr. Seuss Grinch Grow Your Heart Card Game may be our favorite. The game takes a familiar, classic concept and switches it up just enough to fit the Christmas theme and the use of cards, rather than dice.

We do wish the round limitation didn’t exist so that each game was technically a seven-round game, but this is easily a house rule your family can implement if you agree and want each game to last longer.

While the Grow Your Heart Card Game may be too complicated for some very young players, it absolutely earns our recommendation for older kids and even adults.