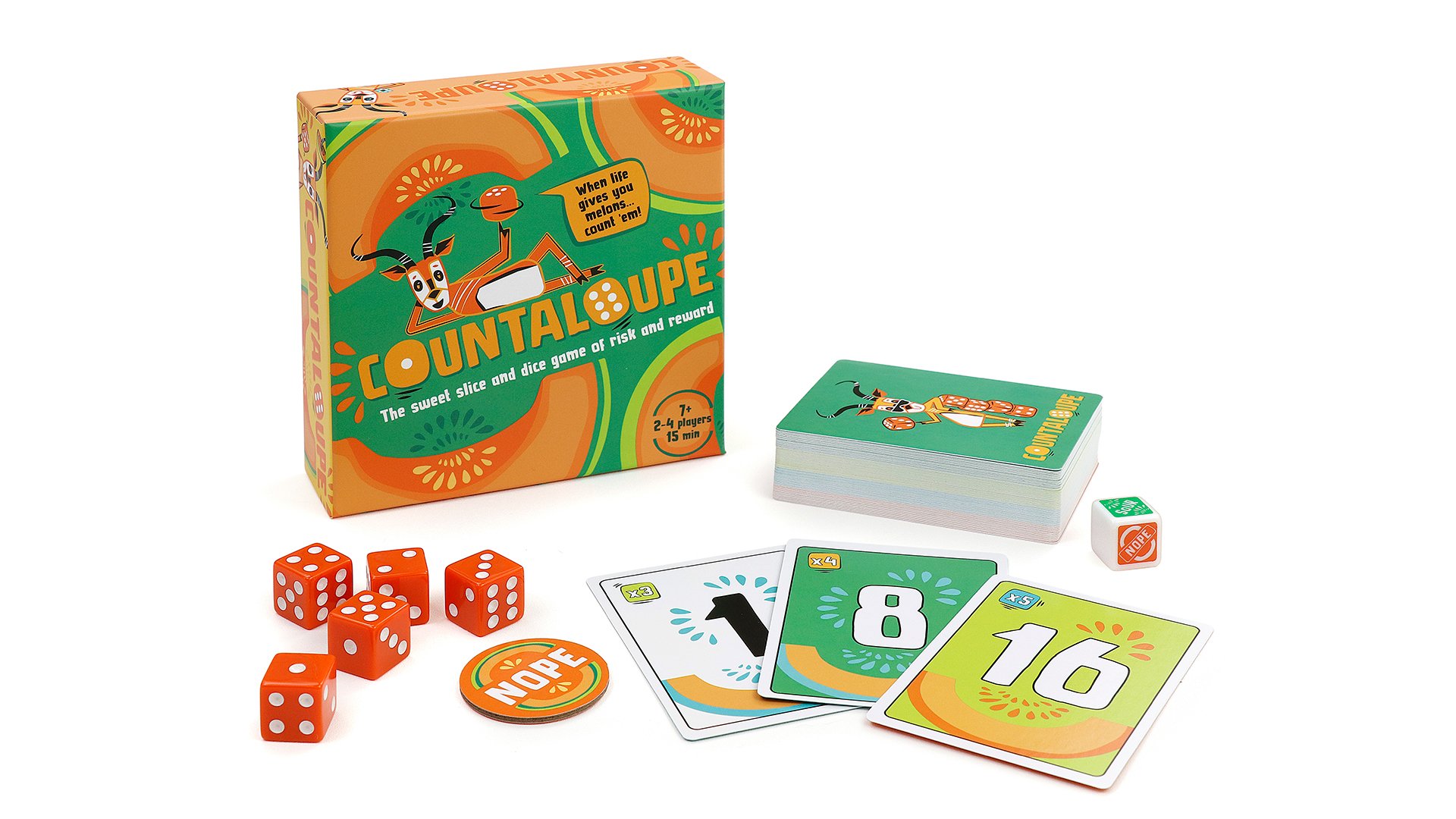 Countaloupe is a kid-friendly dice and card game from Bananagrams, the company behind the Bananagrams word game.

How do you play Countaloupe?

Countaloupe is a card and dice game for 2-4 players with a recommended age of 7+. The goal of the game is to be the first player to clear their deck of 16 numbered cards by rolling the dice and performing addition.

Countaloupe comes with four decks that each contain cards numbered 1-16. Each player takes one deck for themselves before the game begins.

Once players make sure their decks are sorted in numerical order, with the 1 card on top and the 16 card on the bottom, they can begin the game.

This means that at the beginning of the game, players can’t remove any cards from their deck until they roll a number 1 on one of the three dice. From there, they can use any combination of dice to add up to the number 2 and so on, and it’s possible to remove multiple cards from the deck on a single roll.

Once players get to the point on their turn where they can no longer remove cards from their deck (in our example, the player wouldn’t be able to reach “6” using 2, 2, and 3), they can decide to end their turn or take a risk and roll the dice again. If they can reach the next number they need on their second roll, they can continue playing and finish their turn as normal. However, if they can’t reach the next number they need on their second roll, they’ll take a penalty and will need to return some of the cards they’ve already cleared to their deck (the number of cards they need to return to the deck is determined by how close they are to the final card).

Once players reach the 7 card on their deck, they’ll begin rolling four dice on each turn instead of three. Similarly, once players reach the number 12, they’ll begin rolling all five dice that are included with the game. This gives players more numbers to work with on each turn, and more chances to clear the higher-numbered cards from their deck.

Players also roll the game’s Chance Die on every turn, which adds some strategy and more chance-based gameplay to the mix. Depending on the results shown on the Chance Die, players may be allowed (but not required) to trade their deck with another player to give themselves an advantage, or they may be required to trade their deck with the player who has the lowest number card on the top of their deck. The Chance Die may also give players control of the game’s Nope Chip, which adds even more strategy to the game.

The Nope Chip allows players to temporarily stop a player from removing cards from their deck, as well as protect their own deck from being traded to someone else. Players can use strategic thinking to decide when it’s most advantageous to play the Nope Chip. For instance, they may want to play the Nope Chip to block another player’s deck if they’re getting close to winning the game.

Each round continues until someone has cleared the final card from their deck. At that point, the winner of the round receives 16 points, and everyone else receives the number of points matching the card on the top of their discard pile. The first player to reach 100 points wins the game.

Countaloupe has an expected play time of 15 minutes.

Countaloupe offers a decent mix of strategy and chance-based gameplay, though it may be too simple for some. Players may also become frustrated if they think they’re about to win the game and their deck is traded to someone else. Though, if this happens, it may also give parents the chance to talk to kids about patience and “fairness.”

We really enjoy how much the game requires players to practice their math skills, as they may need to mix and match the dice in multiple combinations to figure out whether or not they can reach the number they currently need. This math becomes more complicated once players start rolling four and five dice, since there are more dice combinations to work through, but the experience is also customizable if this is a problem.

For instance, if your youngsters aren’t comfortable working with numbers past 10, you can remove cards 11-16 from the decks so that the highest number players will need to reach is 10 and the most dice they'll need to roll is four. Adults and older players can also work together with kids on teams so littles will have help counting to the game’s higher numbers if they need it.

Countaloupe feels more like an educational experience than a traditional card game, but that’s not a bad thing. While a group of adults may find the game to be a bit too simple, if you have littles who are working on their math skills, this is a nice option to check out.

Countaloupe is now available for $9.99 at Barnes & Noble, Amazon, and other retailers. The game can also be purchased on the Bananagrams website.

Disclosure: SuperParent received a copy of Countaloupe for coverage purposes.

Ticket to Ride: San Francisco Hits the Tabletop This June