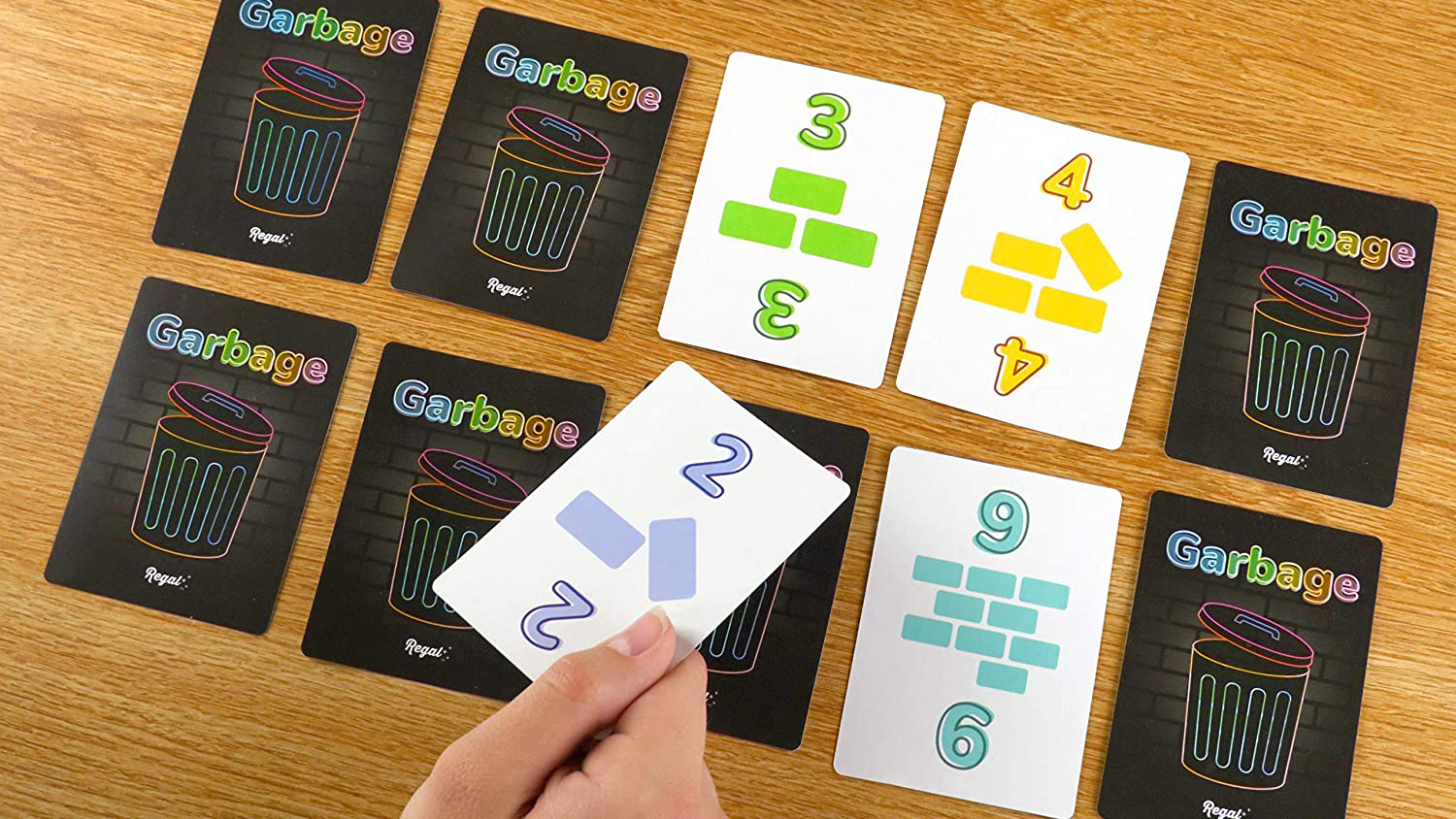 Earlier this year, Regal Games, the company behind card games like Banapples and The Goodge Rules, released Garbage, a family-friendly card game designed for 2-4 players aged 8+.

In each round of Garbage, players deal cards face down in front of them, and they have the goal of replacing those cards with face up number cards that start with the number one and count up from there. The deck also contains cards with pictures of monsters inside trash cans, which are considered garbage cards. Players want to avoid these cards, but whether or not they collect them will be based on chance.

In the first round of Garbage, each player places 10 cards face down in front of them in two rows of five. These cards represent the numbers 1-10 (1-5 on the top row and 6-10 on the bottom row). The rest of the cards are placed in a draw pile in the center of the table. The first player draws a card from the deck. If it’s a number card, they’ll place it in the correct spot in front of them and flip over the card that was face down in that position.

For instance, if players draw a card with the number 5, they’ll pick up and flip over the card in the fifth position in front of them and place the 5 card in its place. If the new card they flip over is another number card they need for their sequence, they can place it where it needs to go and pick up the face down card in its position. This process continues with players flipping over and placing cards until they draw a card they don’t need or until they draw a garbage card. At that point, they discard the final card they flipped over and it’s the next player’s turn.

The first round continues until one player has replaced all of their face down cards with face up cards in numerical order (again, 1-5 on the top row and 6-10 on the bottom row). When this happens, every other player gets one more turn to try and complete their own sequence.

For the second round of Garbage, every player who completed the sequence of 10 cards is dealt nine face-down cards, and they’ll only be required to collect the numbers 1-9 on the next round, instead of 1-10. If players didn’t complete the 10-card sequence, they’re dealt 10 cards again.

Each time players complete a sequence during a round, they’ll receive one fewer card during the next round until they eventually only have one face down card in front of them representing the number 1. Whoever finishes this last round first wins the entire game.

For these future rounds, if players draw a number card they don’t need (for instance, if they draw a 10 card when they only have nine cards in front of them), these extra cards are treated as garbage cards and their turn ends.

While Garbage is designed for players ages 8 and up, we like the idea of adults and older children playing with younger kids on teams, since this would allow younger kiddos to practice their number identification, counting, and number sequences.

Garbage is now available on the Regal Games website and Amazon. The game has a suggested price of $9.99.