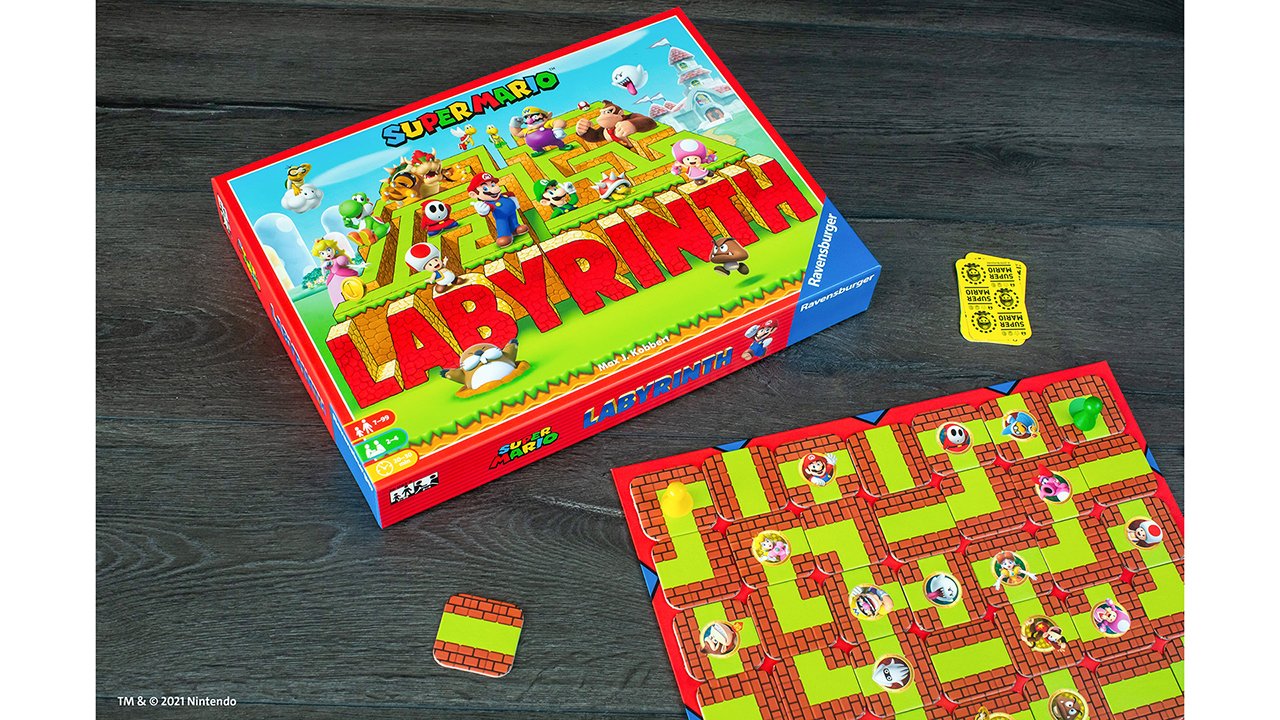 What is Super Mario Labyrinth about?

In Super Mario Labyrinth, characters from the Super Mario video games are scattered around a complex maze, and players will need to explore the maze to find them.

Super Mario Labyrinth supports 2-4 players aged 7+. Before starting the game, players will need to construct the maze by randomly placing 33 square maze tiles on the maze game board.

The maze board features 16 maze tiles that can’t be moved. Four of these serve as the starting positions for the four player pieces, while the others feature Super Mario characters like Mario, Daisy, and Luigi. The other 33 tiles contain a mix of regular maze pieces and character pieces. By randomly placing these maze tiles onto the board before each game, no two games will be exactly alike.

Once the maze has been created, a single square maze tile will remain. This will allow players to shift the maze around to change its shape (more on that in a bit).

Before beginning the game, players will deal 24 picture cards evenly to all players. That is, if there are only two people playing, each person receives 12 cards, and so on. Players will place these cards in a face-down pile in front of them, and they’ll search for each character one-at-a-time by only looking at the top card in their deck. Players need to keep the character they’re looking for a secret from the other players.

Once the game begins, players will take turns shifting the maze and moving their character token around the maze. The maze board features 12 blue arrows along the outside edges. These arrows show players where they can insert the leftover square maze tile. When they insert this tile into a row or column on the board, they’ll slide all of the other tiles in this row or column down one position until they eventually slide the final tile off of the board. This tile becomes the tool the next player will have to use to shift the maze.

Each player’s goal is to shift the maze in order to create an open walking path for their token to reach the character they’re currently looking for. Whether or not this is an easy or difficult task to complete will be determined partly by luck (how the initial maze was set up and the picture cards each player was dealt) and partly by the actions of each player.

That is, the game allows players to use some strategic thinking as they play. In addition to creating their own paths through the maze, players can observe the actions of other players and attempt to block their movements. For instance, if a player can tell that someone is heading to the left corner of the board, they may want to shift the maze on their turn to block the other player from getting there.

Once a player has found all of the characters matching their picture cards, they’ll need to return to their starting position to win the game. The first player to accomplish this task wins.

We were pleasantly surprised by Super Mario Labyrinth. In addition to challenging players to use strategic thinking, the game allows players to test their spatial reasoning skills, as they’ll need to mentally manipulate the maze to “see” the path they’ll create beforehand if they insert the extra maze tile into a specific location.

Plus, we really enjoyed the eclectic mix of Super Mario characters that are featured in the game. Since the game features so many different characters, major characters like Mario, Luigi, and Bowser are joined by some lesser-known characters and enemies like Spike, Blooper, and Kamek (a Magikoopa), among others (Donkey Kong and Diddy Kong are also featured). This should make the game even more fun for fans of the Super Mario video games.

We have a minor complaint about Super Mario Labyrinth that deals with the game’s construction, rather than the gameplay experience. The maze board is designed to allow tiles to slide across different rows and columns, but it’s very easy for tiles to get stuck on the immovable tiles if they’re not positioned just so. This prevents the tiles from freely sliding until you figure out which one is stuck.

This mechanic would work better if there was slightly more room between the moving and non-moving tiles, or if the moving tiles fit into an indentation or “track” on the board to keep them in the right positions.

As we said though, this is a fairly minor issue, and it isn’t a deal breaker.

In addition, parents should know that Super Mario Labyrinth is a customizable experience. For instance, if you’re looking for a shorter game, you can remove some of the picture cards from the deck so that each player has to look for fewer characters. You can also remove the requirement for players to return to the starting position in order to win the game after they’ve found all of their characters.

We really enjoyed playing Super Mario Labyrinth. The game can be fairly slow-moving since players may need to experiment with a variety of possible moves in their head before making a move in the real-world, but this also gives other players time to analyze the board and plan for different possible outcomes before it’s their next turn.

While the game's price of $34.99 feels high, if your family enjoys all things Super Mario, we still recommend checking it out. (If Super Mario isn’t your thing, you may want to check out the original Labyrinth instead, which challenges players to find treasures in the maze.)

Super Mario Labyrinth is now available for $34.99. The game has an expected play time of 20-30 minutes.