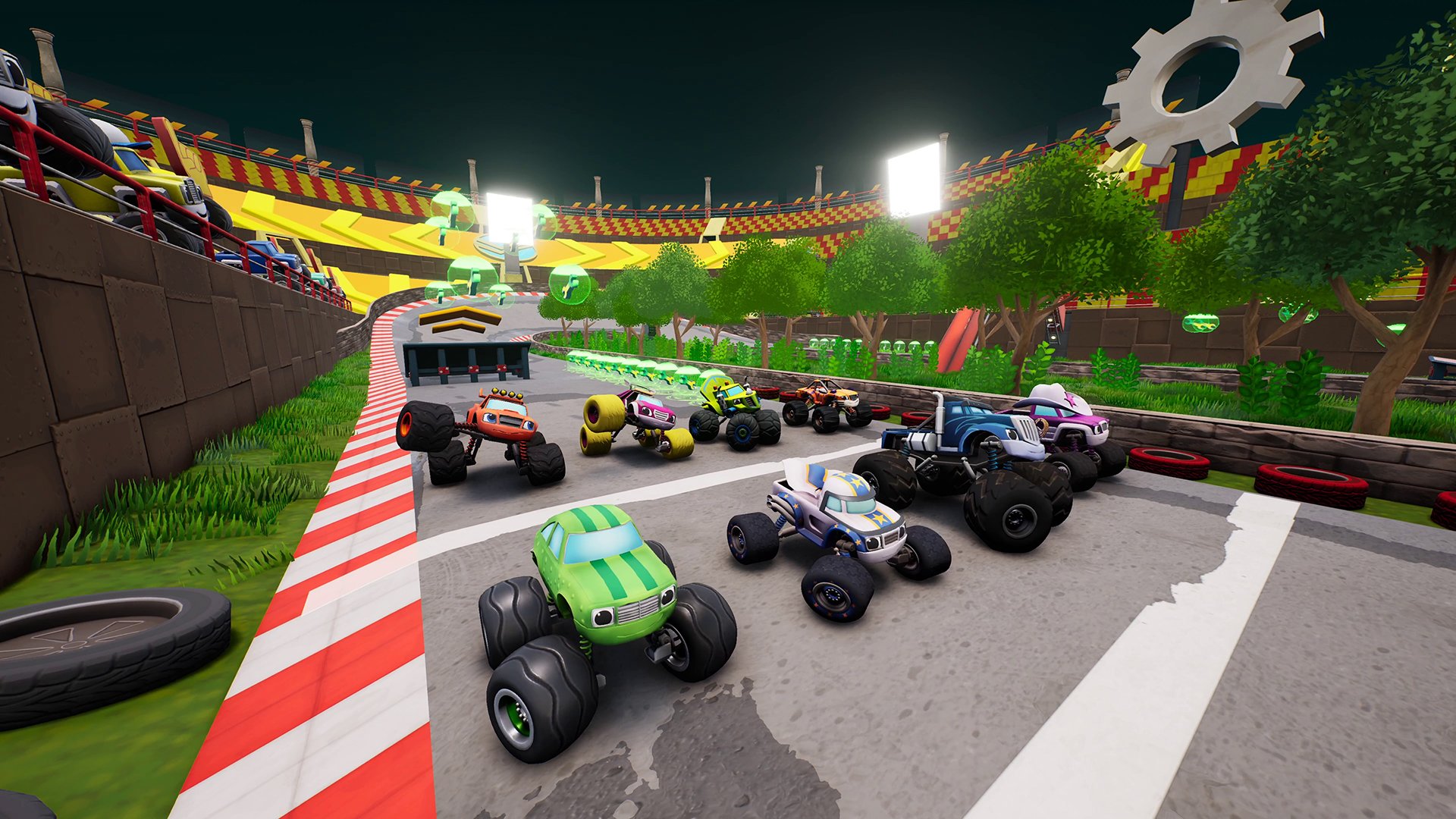 We had the chance to check out the Switch version of the game.

What’s Blaze and the Monster Machines: Axle City Racers about?

The Quick Race mode allows players to quickly dive into a single race against computer-controlled opponents, while Play with Friends allows up to four people in the same room to race against one another through split-screen multiplayer (this means that every player has their own section of the screen to look at while racing).

Finally, the Adventure mode allows kids to complete four major racing events: three Cups with three races each and a final one-on-one race against Crusher. As players complete events in Adventure mode, they’ll unlock more race tracks to choose from in the other two modes (there are 10 tracks in total).

During each race, players can press a button to accelerate and another button to brake (though braking is rarely necessary). They can press a third button to drift around corners, and if they drift for long enough, they’ll receive a temporary speed boost. Players can also drive over ramps on each track to earn even more speed boosts.

In addition, as players race, they can drive through bright green bubbles containing a wrench. Each time they collect 10 of these bubbles, they can activate their character’s special ability.

Axle City Racers features seven playable characters: Blaze, Crusher, Pickle, Darington, Zeg, Starla, Stripes, and Watts. Each character has a different special ability. For instance, Blaze’s ability gives him a temporary speed boost, while Watts can activate an electric charge that surrounds her vehicle with electricity that can mess with nearby vehicles (this ability also gives her a quick boost of speed).

In addition to this kart racing gameplay, Axle City Racers features STEM facts on its loading screens, which teach kids about topics like “Force,” “Recycling,” and so on. As kids win races in the game’s Quick Race mode, they’ll unlock images of these loading screens that they can view at any time from the game’s “Stempedia” menu.

Blaze and the Monster Machines: Axle City Racers is a really simple game that’s designed for preschoolers ages 3 and up. This means older kids and adults may find the game too simple and even boring, especially if they’re already fans of more complex kart racing games like Mario Kart 8 Deluxe and Nickelodeon Kart Racers 2: Grand Prix.

That being said, the game offers three difficulty settings (Easy, Medium, and Hard), and the harder settings may make the game a bit more challenging for more experienced or older players. (For the record, we rarely lost a race on the hardest difficulty.)

It’s also worth pointing out that Axle City Racers offers an autodrive feature that allows the game to automatically drive the player’s vehicle. When this mode is turned on, the player’s vehicle will automatically accelerate and steer around corners, allowing kids to focus on pressing the correct button to drift or on activating their vehicle's special ability whenever it’s ready. Each monster machine also has a horn for players to honk, and kids can also make their vehicles jump into the air.

Axle City Racers features voice acting on the game’s menus, so kids don’t need to know how to read to navigate the menus. The STEM facts on the game’s loading screens are also read out loud.

That being said, the loading screens repeat pretty frequently, so other people in the room may become tired of hearing the same facts over and over again as littles play. Similarly, each character has a few catchphrases that play on repeat as players activate their special ability or drive over ramps during races.

Finally, the game’s drifting mechanic requires players to drift for a few seconds before activating the vehicle’s speed boost. We would have liked this feature more if the speed boost activated sooner, but this isn’t a deal breaker.

Blaze and the Monster Machines: Axle City Racers isn’t as complicated as many other kart racing games, but the title’s simplicity and kid-friendly autodriving feature make it a great option for very young players or even players without much video game experience.

If your family already enjoys games like Mario Kart 8 Deluxe, you may want to skip Axle City Racers because of the game’s simplicity. But if you’re looking for a game for a very young person in your life, this is a good place to start.

Blaze and the Monster Machines: Axle City Racers is now available for $39.99 on Switch, PlayStation 4, Xbox One, PC, and Stadia. The game is rated E for Everyone by the ESRB.