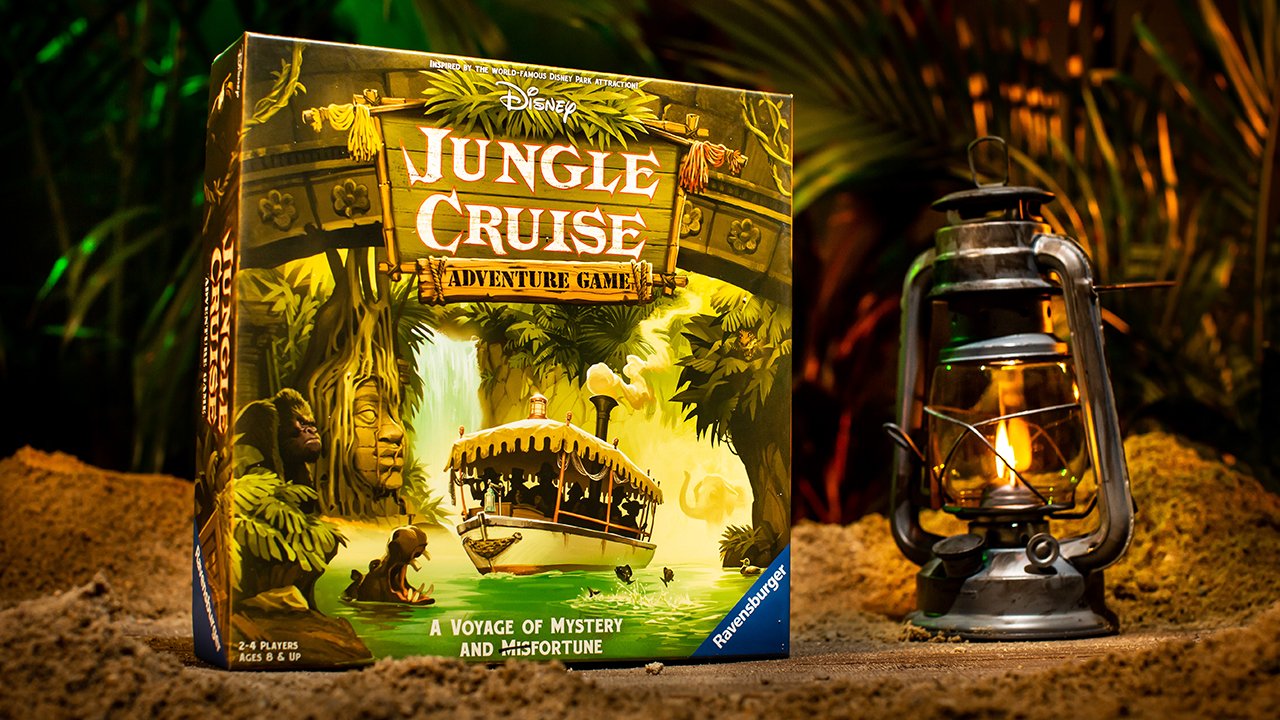 We went hands-on with the Disney Parks edition of the Disney Jungle Cruise Adventure Game.

Disney Jungle Cruise Adventure Game is for 2-4 players with a recommended age rating of 8+. The game’s story sees each player become the Skipper of their own Jungle Cruise boat, working for the president of the Jungle Navigation Company, Alberta Falls.

Alberta is about to take a break from the job, and she’s decided to leave one of four families in charge while she’s away: Lyons, Temple, Cruz, or DeNyle. The family Alberta has chosen will be randomly selected before each game, and players won’t know which family was selected until the end of the game (unless they figure it out using the game’s clue cards along the way).

Players will be challenged to make their way down the river while holding onto as many passengers and pieces of cargo as possible. Along the way, they’ll encounter a variety of obstacles, which can cause them to lose passengers and cargo. At the end of the game, passengers from the chosen family will be worth the most points.

Each player starts the game with 12 passenger tokens that are placed in four sections on their boat board: Port, Center, Starboard, and Stern.

Each player will also draw one of six Skipper Specialty Cards before the game begins. Each card gives players a special active or passive ability that will apply to them (and only them) during the current game. Players can choose which card they want, or they can draw the cards randomly.

Once the game begins, players will take turns rolling a Speed Die (think movement die) to make their way down the river, and each time they stop, they’ll need to reveal four Navigation cards from the deck. Each card features an “encounter” with one of the animals or scenery pieces found along the river -- for instance, the backside of a waterfall, snakes, elephants, and more. Most of these encounters are considered dangerous, while others may help players out. Each card also features a pun or joke inspired by the jokes riders hear on the Jungle Cruise theme park attraction.

The Speed Die contains the numbers 1-4, and players will use the number they rolled to determine how many Navigation cards they must encounter on their turn. For instance, if a player rolled a “1,” they must still draw four Navigation cards, but they only have to act on one of them.

Dangerous navigation cards have a danger rating of 1-3, and when players encounter (act on) one of these cards, they’ll need to roll the associated number of “Peril Dice.” Depending on the results of the dice roll, players may need to remove a passenger or piece of cargo from their boat. Each card is associated with a different area on the boat (Starboard, Port, etc.), so when players are required to remove one or more items, they must do so from the matching area of the boat (unless that section of the boat is already empty).

As players make their way down the river, they can stop at Outposts and Mailboxes (clue stations). Outposts allow players to pick up cargo or a lost passenger for their boat (a lost passenger is a passenger that was removed from someone's boat earlier in the game). Mailboxes, meanwhile, allow players to view one of the families that Alberta has not chosen for that game. Players are meant to keep this information to themselves to give themselves an advantage going forward. That is, if they find out that the Lyons family hasn’t been selected during this game, they’ll know passengers from the Lyons family aren’t the most valuable, and they can choose to remove them from their boat while keeping other families around.

While the game features many chances to lose passengers and cargo, players will also be able to collect a Lost & Found token on most turns in order to refill their boat with cargo and/or lost passengers.

When players reach the end of the river, they can collect a Tip Token worth bonus points at the end of the game. If other players are still making their way down the river, any player that has already reached the end will collect another Tip Token on their next turn until all of the Tip Tokens have been collected. At that point, every boat moves to the end of the river automatically, and the family Alberta selected for the game is revealed. Players will use this information to determine which passengers were worth the most points. Then, they'll add up the value of all of the cargo and passengers they have on their boats, and the player who earned the most points wins.

Disney Jungle Cruise Adventure Game is a fine game -- there’s nothing particularly wrong with it, but it didn’t blow us away either. Once you learn the rules, the game moves fairly quickly, and we appreciate the fact that it will help players (such as younger players) practice their strategic thinking, since they’ll need to decide which Navigation cards to act on and which passengers or cargo to remove from their boat whenever this is required.

As we said before, Disney Jungle Cruise Adventure Game didn’t blow us away. We appreciate the clever puns on each of the Navigation Cards, but once you’ve read them the first time, they lose their punch the second (and third…) time around.

We also appreciate the random selection of the chosen family in each game, since it may make different passengers the most valuable each time you play. That being said, the game still leaves lots to random chance and dice rolls, so you can only plan so far ahead even after you learn some of the families that haven't been selected by Alberta during each game.

Ultimately, this is a decent game that’s easy to understand and play, but it didn’t wow us enough to make it a must-buy.

Editor's Note: The images in this review feature the standard edition of the Disney Jungle Cruise Adventure Game.