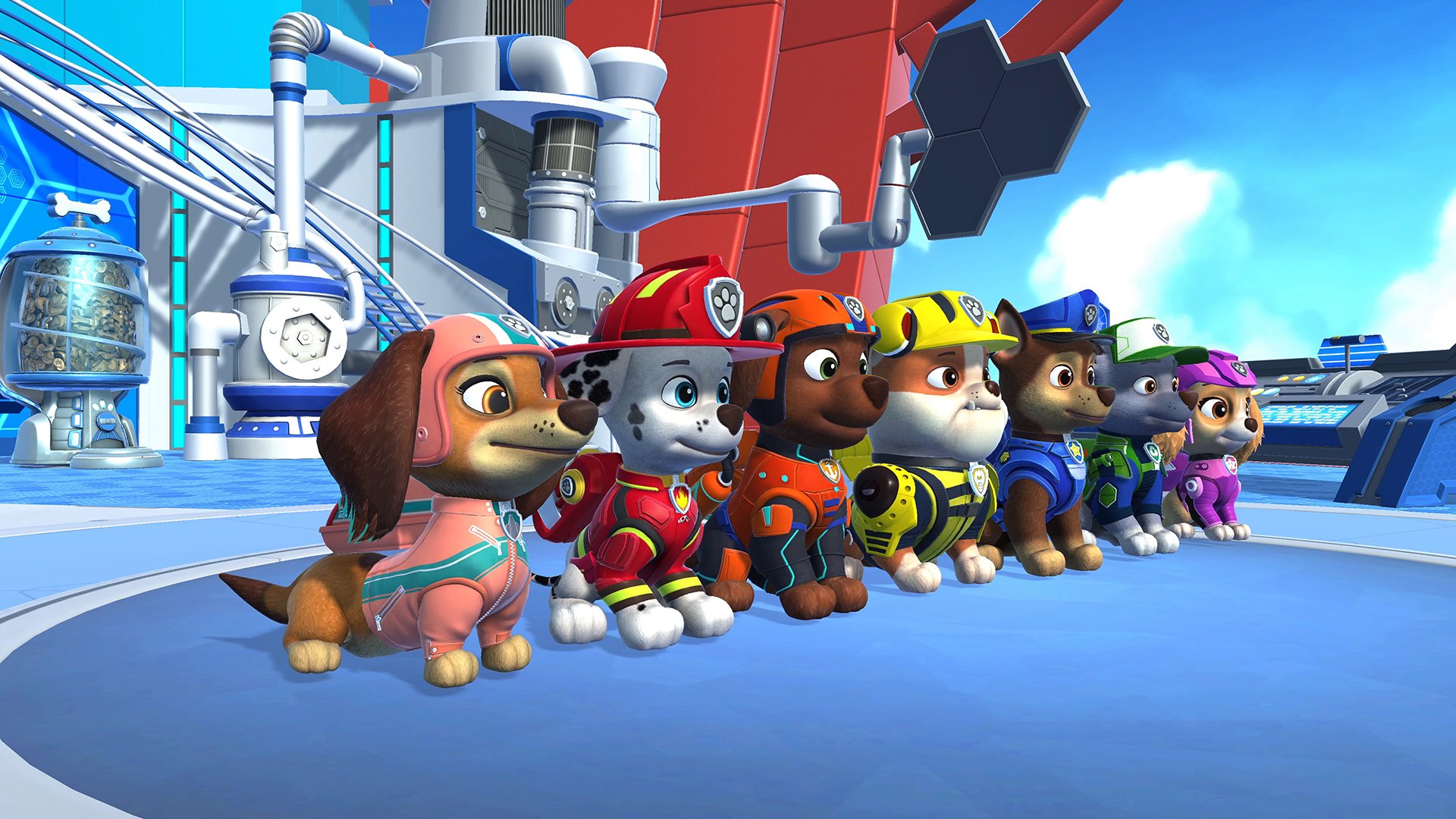 Outright Games and Nickelodeon recently released Paw Patrol The Movie: Adventure City Calls on consoles and PC. We had the chance to play the PC version of the game.

For instance, one mission asks players to reach a burning building and put out the fire, while another asks the pups to repair a damaged water filter that is allowing waste to enter the river.

Paw Patrol The Movie: Adventure City Calls is a 3D platformer that asks kids to jump on and over platforms to make their way through each level. There are eight missions to complete, as well as a series of mini-games that can be unlocked over time.

Each level features at least two of the seven playable characters (which are chosen by the game), and kids can switch between the currently playable characters at any time. The game also allows two players in the same room to team up for some cooperative multiplayer.

While the game’s levels have simple designs, they’re not boring, since there are hundreds of Pup Treats, as well as three special Badges, to collect in each stage. Plus, at certain points in each level, players will need to use one of the character’s special abilities to progress. Chase has a grappling hook that can be used to reach the roofs of buildings, Rubble has a drill that can be used to clear debris blocking the path, and so on.

Many stages also feature a driving mini-game. During these games, the vehicle moves forward automatically and players can move left and right to avoid obstacles in the road and collect items like Pup Treats or trash bags, depending on the level.

Finally, there are four types of mini-games to try. For instance, Pup Pup Boogie is a rhythm dancing game that asks players to press specific buttons as symbols reach a certain area on the screen, and Obstacle Race challenges players to follow a specific path through an environment by running through waypoint markers. In the Obstacle Race mini-game, players are challenged to complete each course before running out of time.

Kids can play these mini-games as often as they want once they’re unlocked. Players can also replay the game’s main missions if they’d like (for instance, if they want to collect any Pup Treats they may have missed the first time around).

(Parents should know the Obstacle Course mini-game is more challenging than the other mini-games, since some of the waypoint markers can be difficult to spot in the game’s bright outdoor environments.)

Paw Patrol The Movie: Adventure City Calls features voice acting, even on tutorial screens, so players aren’t required to know how to read (though it's worth noting that the dogs themselves don't talk). Plus, tutorials for a character’s special abilities are shown almost every time an ability is used, so kids aren’t required to memorize a long list of controls.

Lastly, we noticed a few slight visual bugs in the PC version of the game, but these didn’t ruin the experience, and we assume they can be fixed in a future game update, if one is released.

Is this game fun to play? What’s the verdict?

Paw Patrol The Movie: Adventure City Calls is a simple, short game, but a game doesn’t have to be complicated or challenging in order to be fun. In fact, we really like this game. It’s cute and family-friendly, and the lack of enemies and more challenging features mean it’s a great option for very young or new gamers (though, we acknowledge that older players and adults may find it too simple).

Overall, we absolutely recommend checking this one out.

Paw Patrol The Movie: Adventure City Calls is available on Switch, PlayStation 4, Xbox One, and PC for $39.99. The game is rated E for Everyone by the ESRB.

Editor's Note (08/27/2021): This review has been updated with additional details about the game since publication.