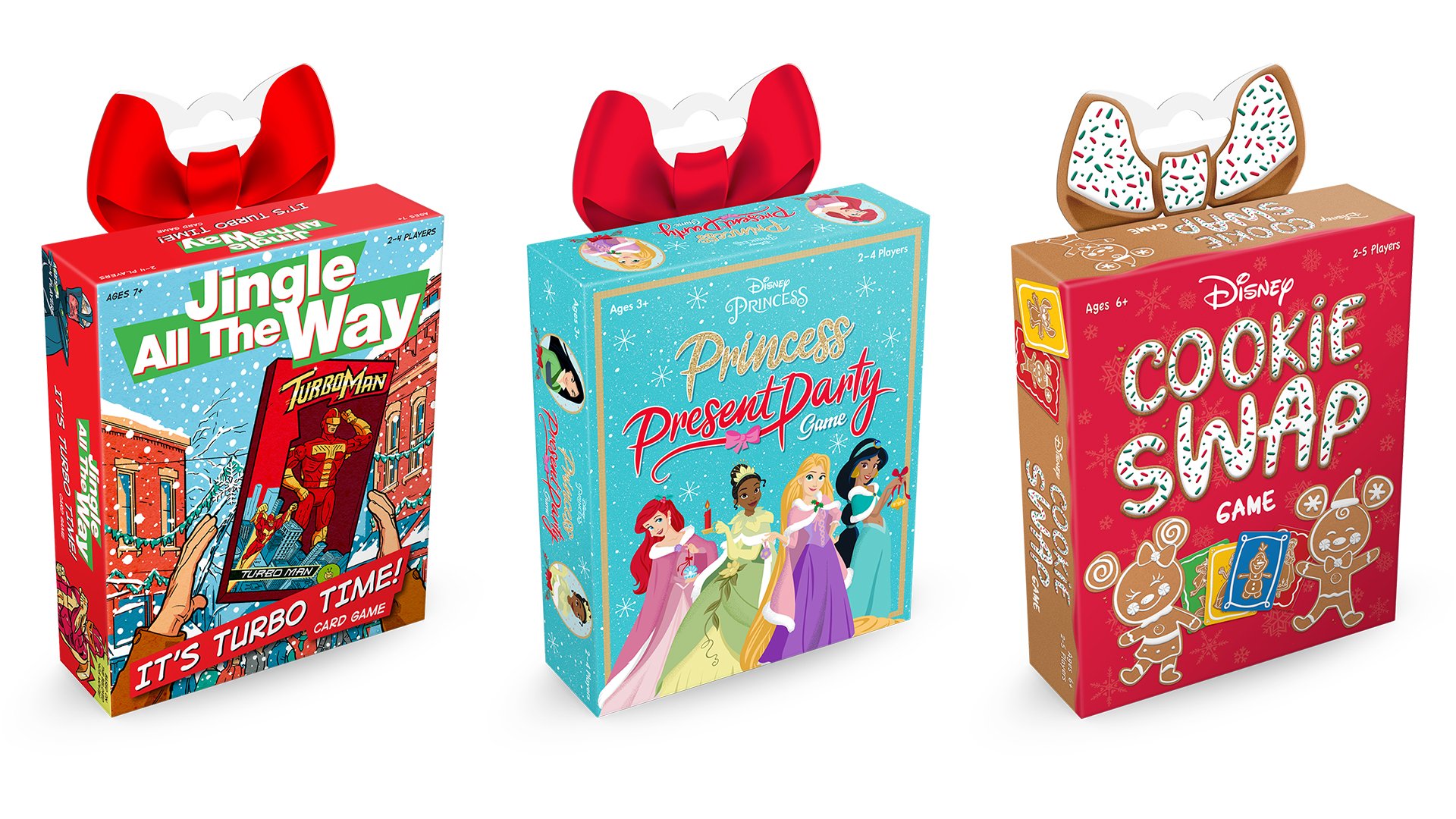 It’s only August, but the winter holiday season will be here before you know it! As we look forward to the holidays, Funko Games has revealed five new Disney- and holiday-themed card games that will be released later this year.

Inspired by Disney’s 1950s Christmas cartoons, this card game will challenge players to help Chip and Dale collect “treasures,” like ornaments, candy canes, and more, from inside a Christmas tree. Players will need to watch out for Pluto, who wants to stop the chipmunks from collecting the goodies!

Disney Chip ‘n’ Dale Christmas Treasures will support 2-6 players with a recommended age of 5+. The game will have an expected play time of 20 minutes.

This “cookie flipping and finding game” will feature artwork of Disney and Pixar characters designed as gingerbread cookies. Players will need to collect four matching cards from the cookie sheet in order to finish them. As a fun extra touch, this one will include a cookie sheet board that smells like gingerbread.

Disney Cookie Swap Card Game is for 2-5 players with a recommended age of 6+. The game has an expected play time of 20 minutes.

This trick-taking card game is inspired by the 1996 film Jingle All the Way starring Arnold Schwarzenegger. Players will compete to collect toys, including the last Turbo Man doll around. In addition to a set of cards, this game will come with a small Turbo Man figure.

Jingle All the Way: It’s Turbo Time has an age recommendation of 7+. It supports 2-4 players. Each game is expected to last 20 minutes.

Inspired by the film The Nightmare Before Christmas, in this card game, players will need to collect toy parts and use them to craft toys that Jack Skellington can deliver to children on Christmas Eve. Players can keep track of which toy parts to combine by looking at a series of goal cards. For instance, one goal card may ask them to combine the two matching pieces of a jack-o-lantern Jack-in-the-Box.

Tim Burton’s The Nightmare Before Christmas: Making Christmas has an expected play time of 20 minutes. The game will support 2-6 players with an age recommendation of 6+.

This cooperative card game for 2-4 players aged 3+ will ask players to work together to deliver the correct gifts to seven Disney Princesses, like Ariel, Rapunzel, Jasmine, and Tiana, among others. The game will include 42 different present tiles featuring items from each film (like Cinderella’s glass slipper), as well as a cloth bag to hold them.

Each game of Disney Princess Present Party Game is expected to last 20 minutes.

All five of these holiday card games will have a recommended price of $6.99. They’ll be available before the end of the year, just in time for some holiday fun (and holiday gifting).

Keep checking back with SuperParent, as we’ll bring you reviews of all five games as we get closer to the holiday season!

Is your family looking forward to trying any of these games? Let us know on Twitter at @superparenthq.