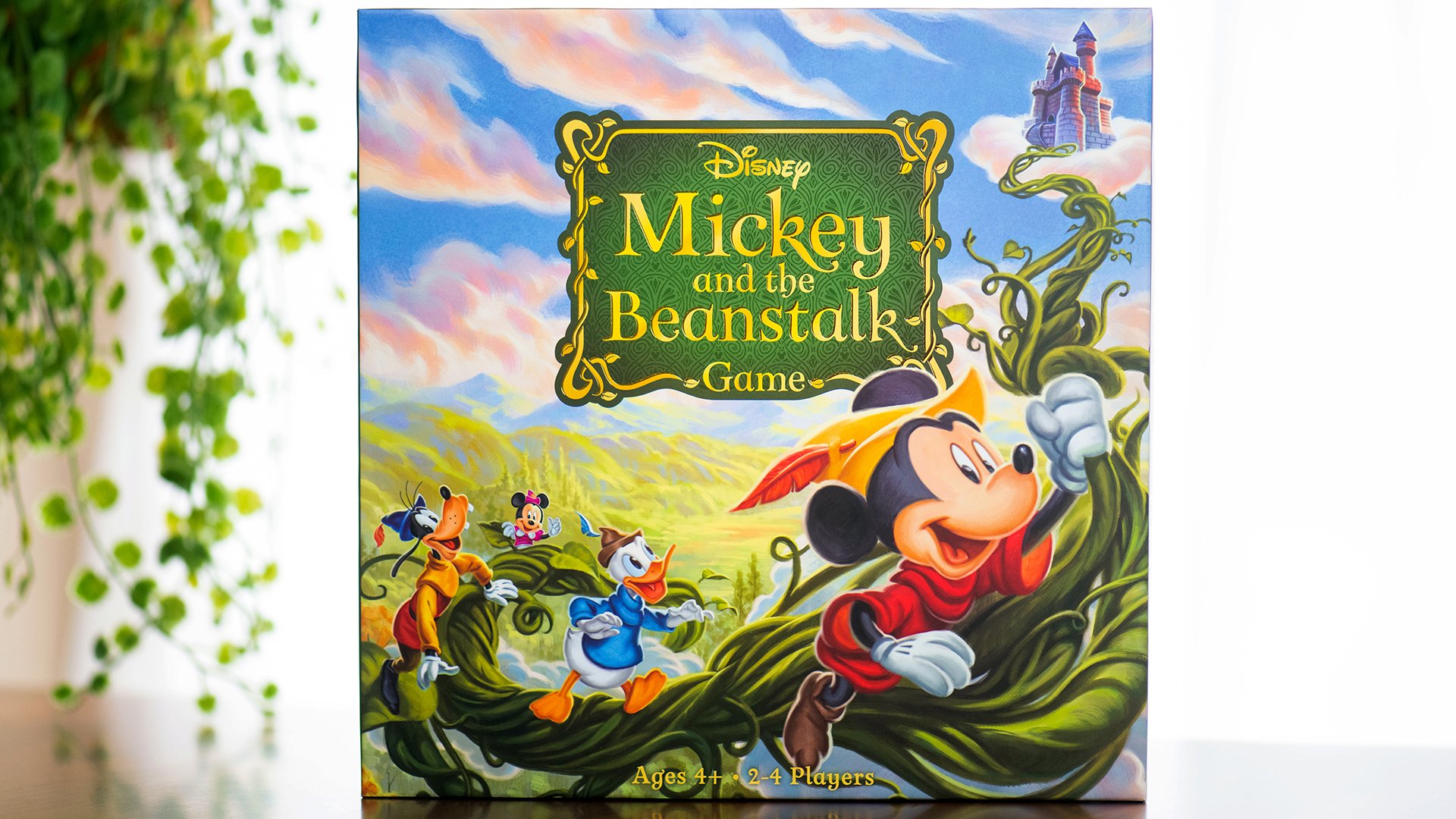 Disney Mickey and the Beanstalk is a family-friendly tabletop game from Funko Games, which has released multiple Disney-themed games in recent months, including Toy Story Talent Show and Disney Mad Tea Party, among others.

Disney Mickey and the Beanstalk is available in two versions: a standard edition for $19.99 and a Collector’s Edition priced at $29.99.

We had the chance to take a look at the Collector’s Edition of the game.

What’s Disney Mickey and the Beanstalk about?

Disney Mickey and the Beanstalk features a 3D game board that must be assembled before each game. It features large cardboard pieces that easily hook together -- these pieces represent the beanstalk, as well as the Giant’s house and table. When they’re assembled, they allow the beanstalk to stand tall above the village of Happy Valley with the Giant’s table perched on top. The bottom of the game’s box serves as the bottom of the game board, which is a clever design (that’s one less piece to assemble and keep track of).

There’s also a plastic beanstalk vine that connects to the corner of the Giant’s house and the Happy Valley board at the bottom. Players can use this vine to climb up to the Giant’s table and to travel back to Happy Valley.

In each game, players are challenged to collect 12 specific food items and the Golden Harp from the Giant’s house and bring everything safely to Happy Valley before the Giant’s Lock Box is filled with food.

Players can choose from four playable characters: Mickey, Minnie, Donald, and Goofy. There’s also a cardboard figure representing the Giant, which will move around the Giant's table throughout the game.

On each turn, a player spins the game’s spinner to determine where the Giant will move (if at all) and how many moves their character can make (they don’t have to move the full number of moves available to them).

The spaces around the Giant’s table are marked with food plates of different shapes (square, hexagon, and circle), and when players land on one of these plates, they’ll draw a Food Token from the Token pile with the same shape. There’s also a key space that allows players to collect a Key Token, as well as a space containing the Giant’s Lock Box.

As for the Food Tokens, players won’t know which food item is on a Token until they collect it. The Happy Valley board contains four houses, with each house wanting three different food items: two specific items (like carrots or tomatoes) and a random item that can be anything players collect.

If the Giant moves to a space around the table that’s occupied by a character, he’ll see them. If that character is holding the Golden Harp, he’ll take it and put it back in his Lock Box. If they aren’t carrying the Golden Harp, he’ll lock up a piece of food instead. The game’s spinner also contains spaces that cause the Giant to instantly lock up a piece of food. If all eight spaces on the Giant’s Lock Box fill up, players will immediately lose the game.

Plus, players have the option to collect more Key Tokens to remove food items from the Giant’s Lock Box even after the Golden Harp is already safe in Happy Valley.

This adds an element of strategy to the game. That is, collecting keys and opening the Lock Box takes longer than simply collecting food from around the table, so players will need to decide if opening the Lock Box is worth the risk of possibly getting spotted by the Giant in the process, or if it’s better to simply collect more food as quickly as possible in an attempt to finish the game.

Finally, when players are ready to leave the Giant’s table and head back to Happy Valley, they can connect the base of their character’s figure to the plastic beanstalk vine and watch them spin down to the bottom. This is an adorable feature that makes the game as much of a toy as it is a tabletop game. That is, we can see kids using the 3D game board as a play set for their figures even after the game is over.

How is the Collector’s Edition different from the standard edition of the game?

The standard version of Disney Mickey and the Beanstalk comes with four figures of Mickey, Minnie, Donald, and Goofy that are a single color. The Collector’s Edition comes with fully painted characters that have more detail. If you think your kids will enjoy using the game as a toy once the game is over, these painted figures will add much more realism to that experience.

When everything is put together, the 3D game board is pretty tall, and younger players may have trouble seeing the top of the Giant’s table depending on their height or the height of your playing surface. The game itself recommends playing on the floor if someone is having trouble seeing the table.

In addition, some players may have trouble seeing all of the necessary food items on the Happy Valley game board because the large beanstalk pieces can block their view. However, since the game is cooperative, another player can tell them the food items the group still needs to collect, so this isn’t a major problem.

What’s the verdict? Is this game fun to play?

Disney Mickey and the Beanstalk is easy to learn and fun to play, especially as characters spin down the beanstalk vine (though we did have figures occasionally get stuck at the bottom). The gameplay is mostly based on luck, rather than strategic thinking, but there is a hint of strategy here, as players have some freedom in deciding which spaces to land on around the Giant’s table, and they can also decide when to return to Happy Valley and whether or not they should try to collect keys instead of food.

Since the game is cooperative, this is a great entry-level tabletop game for youngsters, since older players and adults can help them understand which move is best on each turn until they’re comfortable making those decisions on their own.

We recommend checking this one out ahead of your next family game night.

Editor's Note (08/23/2021): This review has been updated to mention that character figures occasionally get stuck at the bottom of the beanstalk vine.