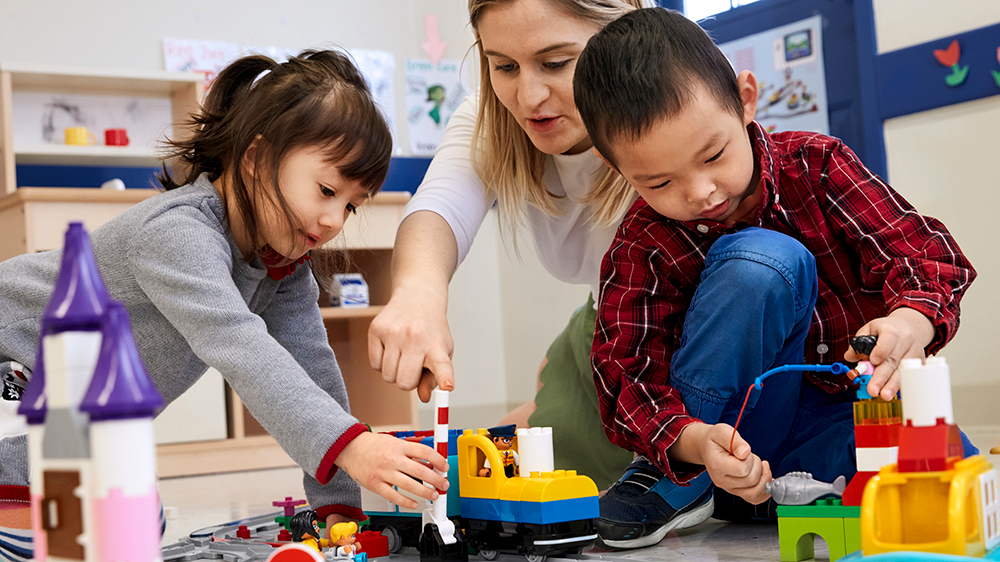 Over the past few months, a number of toys have been announced that aim to teach kids the basic concepts of coding and programming. From a magic wand that takes kids into the world of Harry Potter to a robot built to teach kids as young as four, companies are embracing the opportunity to teach important STEM concepts.

Now, Lego Education, the educational arm of The Lego Group, introduced the Coding Express, a Lego Duplo train set designed to teach children as young as two the basic concepts of coding.

As Engadget reported, the Coding Express kit allows little ones to build a train track, and then place colorful discs in the center of track pieces to interact with the engine. The engine itself has a camera on the bottom that recognizes each disc’s color, causing it to react it some way. The discs can cause the train to stop moving, change direction, sound its horn, and more.

While kids can play with the train set without the requirement of screentime, Engadget said an optional mobile application can be used to change what the colorful discs do. Additional Lego Duplo pieces can be used to change the train into other things (like a caterpillar), and the discs can interact with these creations appropriately (for instance, by making the caterpillar react as it crosses over a disc).

The Coding Express kit was designed for use in schools, and it can be used by up to six kids at once. The kit includes a Teacher Guide containing eight lessons, as well as video tutorials. Lego said these lessons were designed “using science, math and technology guidelines from the National Association for the Education of Young Children (NAEYC), the 21st Century Early Learning framework (P21) and Head Start Early Learning Outcomes Framework.”

The Coding Express kit is expected to launch in the U.S. “by” October 2018. It’s now available to pre-order on the Lego Education website for $189.95. Parents, if you want to see learning tools like this added to your child’s classroom, reach out to their school and teachers and encourage them to adopt STEM toys as part of their curriculum.