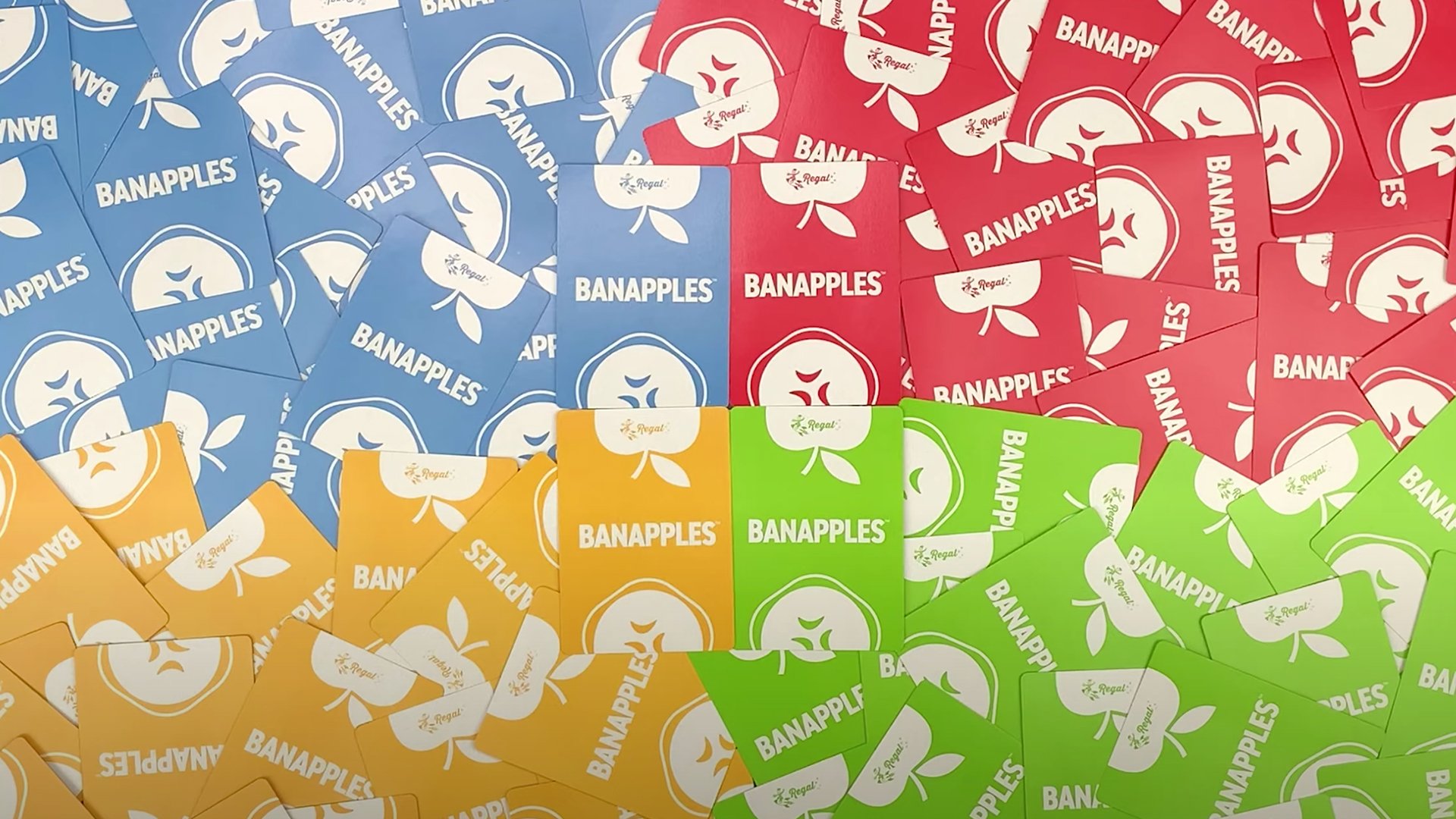 Banapples is a fruit-themed card game from Regal Games, the tabletop game company behind card games like Spoons and a Spork and Scorzo.

In Banapples, players are challenged to “grow” trees on the table using numbered cards in two suits: bananas and apples. The gameplay has some similarities to Solitaire, but with multiplayer and fruit-themed twists.

Banapples supports 2-4 players with a recommended age of 8+. The game comes with four separate decks, and each player uses their own deck throughout the entire game. The decks have bright card backs in four colors (blue, red, yellow, and green), so it’s easy for players to tell their cards apart.

In each round of Banapples, each player deals 10 of their cards to a “Seed Pile” in front of them (the top card faces up), while two more cards are placed face up on the table to the left of this pile. These cards represent “Trees” (or tree trunks) and players need to leave room both below and above the Tree Cards on the table where additional cards can be played.

Lastly, players deal three cards face up in a “Compost Pile” under their Tree Cards. The rest of the cards become a "Stock Deck" that's used to replenish the Compost Pile throughout each round.

Once a round begins, all players work simultaneously to build their trees by playing cards from the Compost and Seed Piles. Cards can be played below the Tree Cards (making the Trees taller) so long as they are one number lower than the current card and have the alternating suit (fruit). This is similar to a regular game of Solitaire. For instance, if the current Tree Card is an 8 of the Banana suit, the next card needs to be a 7 of the Apple Suit, and so on.

Players can also play cards to the “Canopy” above their Tree Cards. Each pile in the Canopy must start with a 1 card. Similar to Solitaire, you can only play a card to a Canopy pile if it has the same suit and is one number higher than the top card in the pile. As an example, you can only play a 5 card of the Banana suit on top of a 4 card of the Banana suit, just like you’d play cards to the top piles in Solitaire.

The goal of each round is to be the first player to use all 10 of their Seed Pile cards. When this happens, players earn points for the cards they used to build their canopies. They’ll also lose points related to the cards they had left in their Seed Pile. The player who used all of their Seed Pile Cards earns bonus points for the round, and you can keep track of each player’s score on the game’s paper score sheets. The first player to reach 500 points wins the game (you could tweak this number for a shorter or longer game).

This gameplay may sound complicated in writing, so we encourage you to watch the instruction video above to get a better idea of how things work.