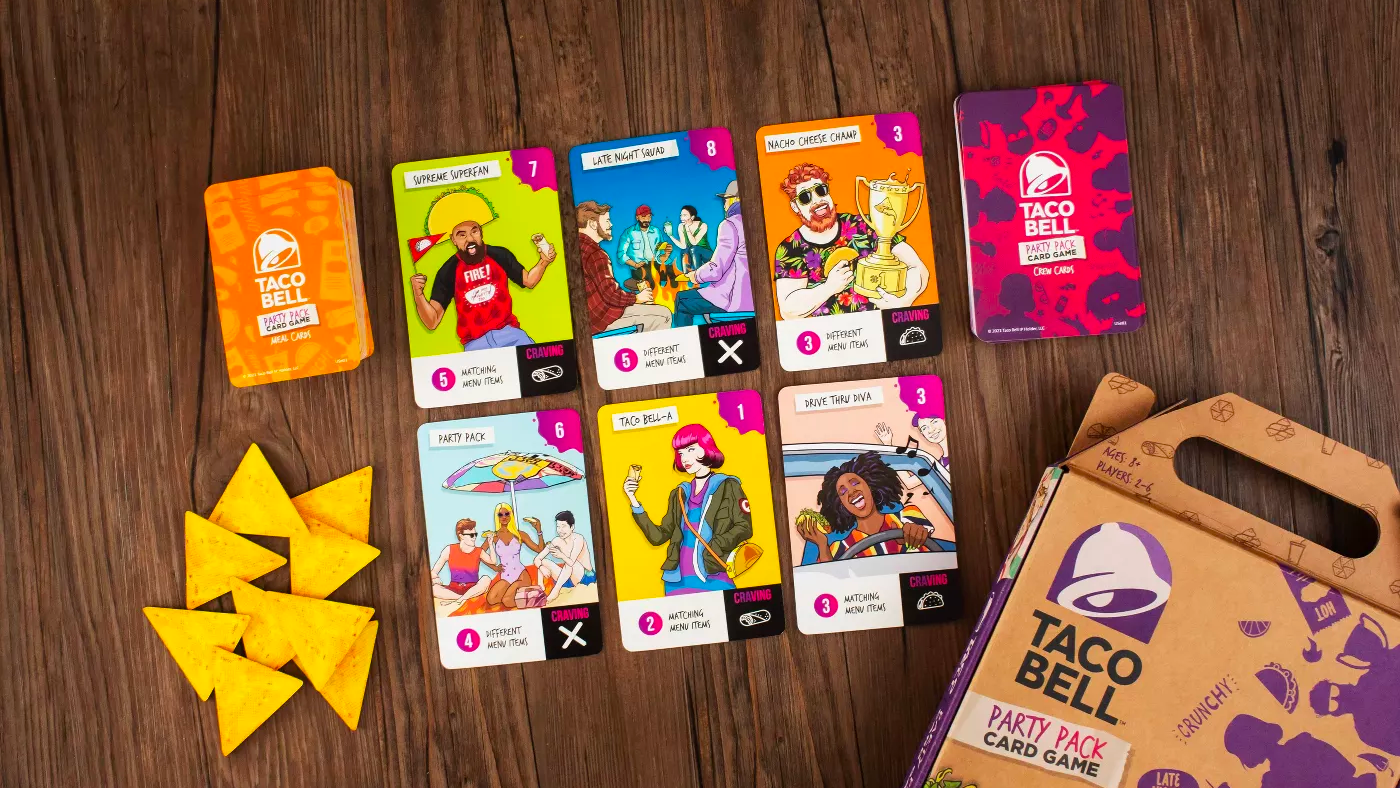 Taco Bell Party Pack Card Game is a card game from Ravensburger, the company behind products like GraviTrax and Pusheen Purrfect Pick.

Taco Bell Party Pack Card Game is a card game for 2-6 players aged 8+. It’s inspired by Taco Bell restaurants, and challenges players to collect food items from Taco Bell’s menu, which can be used to feed members of their “crew.”

Each game has an estimated play time of 20 minutes.

To start the game, six Crew Cards are laid in the center of the table. Each Crew Card represents one or more hungry Taco Bell fans who want something to eat. Each player is then dealt 10 cards from the Meal Cards deck, which features Taco Bell Menu Item Cards, Sauce Packet Cards, and special Action Cards.

On each turn, players can perform one of two actions: serve Menu Items to someone in the crew to collect a Crew Card or swap cards from their hand with new cards from the Meal Cards deck.

There are six different Menu Items in the game: Crunchwrap Supreme, Bean Burrito, Freeze, Crunchy Taco, Cinnamon Twists, and Chicken Quesadilla. If you have the right combination of cards in your hand to fulfill a crew member’s request, you can play those Menu Item Cards to the discard pile and collect the Crew Card for yourself.

Most Crew Cards also have a specific “craving” that players can fulfill in order to collect a Crave Chip. For instance, one of the Diva Drive Thru crew members is craving a Freeze. While you can play any Menu Items to feed a crew member and collect their Crew Card, if you can also satisfy their craving in the process, you’ll collect a Crave Chip along with the Crew Card, giving you extra points at the end of the game.

Action Cards, meanwhile, allow you to take Menu Item Cards from the other players’ hands, discard Crew Cards from the table and replace them with new ones, and more.

The game continues until all of the Crave Chips have been collected. At that point, players count the number of points on the Crew Cards and Crave Chips they earned. The player with the most points wins the game.

We were really surprised by how much we liked the Taco Bell Party Pack Card Game. We didn’t know what to expect from a card game themed after a fast food restaurant chain, but we were pleasantly surprised by how quick this game is to learn and how fun it is to play.

The gameplay here is simple, but it does allow for some strategy, as players may be able to feed multiple crew members on the same turn, but (unless they have a Fire Sauce Packet Card) will need to choose which one to feed by taking into account -- as examples -- the number of points the card is worth or whether or not they think another player also wants it (in this case, they may be able to sabotage the next player who was going after that specific Crew Card).

The game is also customizable, in that you can choose to have a longer or shorter game by changing the number of Crave Chips in play. For instance, a two-player game requires only six Crave Chips, but you can use more if you want a longer game (there are 18 Crave Chips in total).

The Taco Bell Party Pack Card Game was a surprising delight. It’s more than just a game of Go Fish or Rummy with the Taco Bell branding slapped on it -- it’s an easy-to-learn, quick-playing, and family-friendly card game that uses its theme really well, and it’s simply fun to play.

If you’re looking for a casual game for your next family game night, we definitely recommend checking this one out.

The Taco Bell Party Pack Card Game is now available at Target for $16.99. The game will be released at Amazon and other retailers on August 1, 2021.