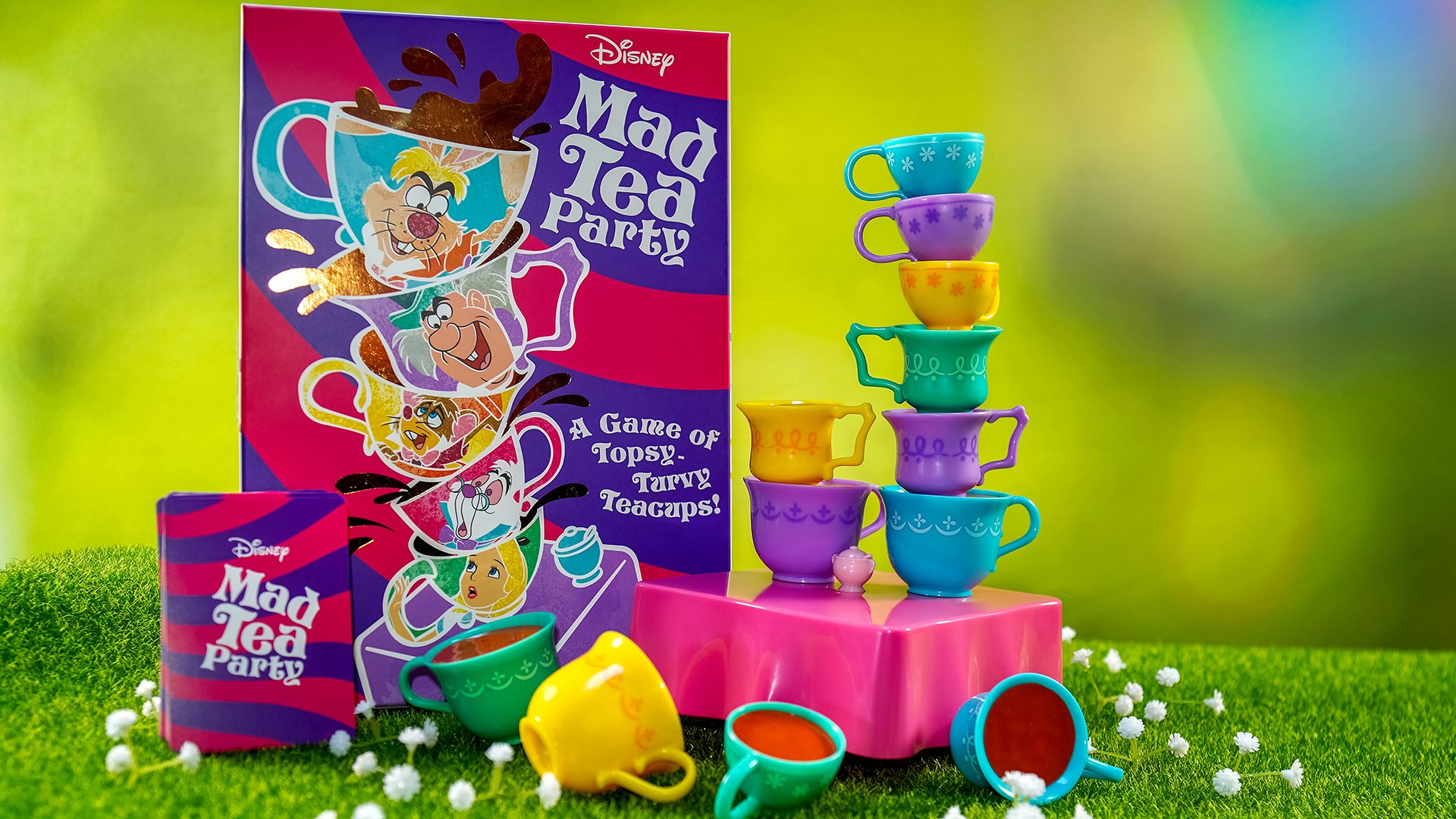 Disney Mad Tea Party is a kid-friendly tabletop game from Funko Games, which has recently released a number of games inspired by Disney’s brands and characters, such as Toy Story Talent Show and Disney Hidden Mickeys, among others. We had the chance to play Disney Mad Tea Party.

Disney Mad Tea Party is inspired by the tea party scene in Disney’s animated film Alice in Wonderland. It challenges players to get rid of the cards in their hands by stacking colorful tea cups on a wobbly table.

The game supports 2-10 players aged 5+, and it has an expected play time of 20 minutes.

Disney Mad Tea Party comes with a deck of 54 cards, as well as 12 tea cups, a plastic tea party table, and a wobbly base that can be attached to the bottom of the tea party table to make it unsteady. The tea cups come in three sizes and four colors (blue, yellow, green, and purple), with three cups in total for each color (one small, one medium, and one large). Each tea cup is designed to look like it’s holding tea, so it has a solid surface at the top, rather than being empty. That being said, the tea in some cups is “slanted,” rather than being perfectly level, which adds to the game’s challenge.

To start the game, each player receives six cards. Most of the cards are “normal” cards, and feature a picture of a character from the film (like the March Hare, Alice, or The Dormouse, among others) or a decorated cake. These cards also contain a picture of one of the 12 tea cups. For instance, one card may have a picture of the smallest green tea cup, while another features the largest purple teacup. There are also cards that have an image of a rainbow tea cup, which can go with any tea cup of the right size.

The rest of the cards are special cards, which allow players to perform certain actions on their turn.

On each turn, players will play a card from their hand to the discard pile in the center of the table. They can only play a card so long as they can technically perform the action it requires. When playing a normal card, players must stack the matching tea cup onto the wobbly table. For instance, if someone plays a card that has a picture of the smallest green tea cup, they must put the smallest green tea cup onto the tea party table.

Since the game has multiple cards relating to each tea cup, players can’t play a card if the matching tea cup is already on the tea party table.

Once players finish placing a tea cup onto the table, they must count to three out loud before their turn is over. This gives the tea cups on the table the chance to tip over if they weren’t properly balanced. If this happens, the person who played the last tea cup must draw three more cards for their hand and take another turn.

The tea party table is large enough to hold at least four stacks of tea cups. However, at the beginning of the game, players can only stack cups onto a single tower. This changes if someone plays the “Clean Cup! Move Down!” card, which allows them to create another tower on the tea party table.

If players don’t have any cards in their hand that they can play, they have to draw cards from the deck until they find one they can play. The game ends when someone has played the last card from their hand, or when someone successfully stacks the 12th tea cup onto the table without any falling even as they count to three.

Disney Mad Tea Party has a simple premise, but it’s really fun to play. Plus, it allows littles to work on their counting and color matching skills, as well as practice some strategic thinking.

For instance, players can try to play it safe and create a tower with one of the largest tea cups as the base, or they can make the game more challenging by purposefully placing a smaller cup near the bottom of the stack in the hopes that the next player will cause the stack to fall and be forced to draw more cards as a result.

As with many titles from Funko Games, Disney Mad Tea Party is a customizable experience. For one, the game includes a rule change for younger players that tells families to play without the wobbling table base to make the game easier.

Or, if you’re looking for a shorter game, you could give each player fewer cards to start the game, you could reduce the number of cards someone must draw when the tea cups fall, and so on.

Disney Mad Tea Party is a cute tabletop game both kids and adults can enjoy, and you don’t have to be familiar with the film to have fun with the experience. We definitely recommend picking this one up for your next family game night.