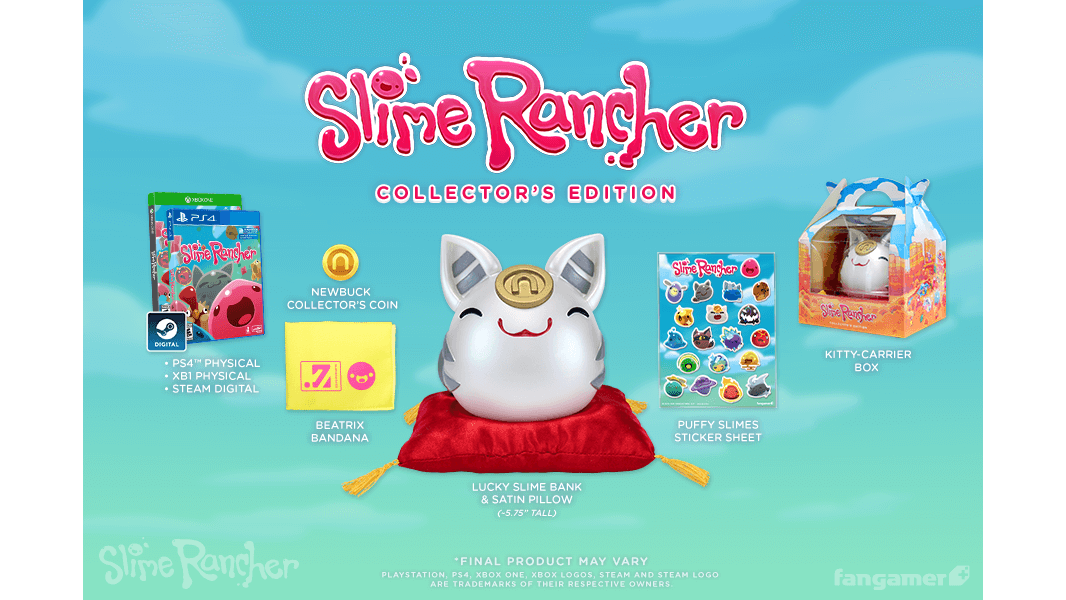 Slime Rancher is a kid-friendly life simulation game that lets players become -- you guessed it -- a slime rancher on an alien planet. Slimes are adorable living blobs that come in different shapes and sizes, which players can collect, feed, and breed to make their ranch a success.

Slime Rancher was originally released on PC and Xbox One in 2017. The game turned out to be a big success, with players giving the game an “Overwhelmingly positive” review rating on PC games store Steam.

New players will be able to experience everything Slime Rancher has to offer when it comes to PlayStation 4 August 21 as a digital download for $19.99. As US Gamer reported, a special physical Collector’s Edition of the game is also being released on FanGamer, a website that specializes in creating video game merchandise.

The Slime Rancher Collector’s Edition comes with a boxed copy of the game for PlayStation 4 or Xbox One, or a key to download the game on PC (depending on the version you choose). It also includes a bandana, a bank shaped like one of the game’s adorable slimes, a satin pillow for the bank to sit on, a carrying box for the bank, a collector’s coin, and a sheet of puffy slime stickers.

The Collector’s Edition costs $64 on FanGamer’s website. The game itself is expected to ship to buyers in early September, but the extra goodies (the bank, stickers, and more) aren't expected to ship out until “late December.”

If you already own the game, you can just pick up the extra goodies for $49. Or, if you’re not interested in the Collector’s Edition, you can pre-order the standard boxed version of Slime Rancher on PlayStation 4 or Xbox One for $29. Finally, a Slime Rancher Slimepedia guidebook is available for pre-order for $28 (or $21 if purchased alongside the $64 Collector’s Edition bundle). The book is expected to ship out in late October.

Slime Rancher is rated E10+ by the ESRB, so check out the trailer above to see if this a game your littles would be into.