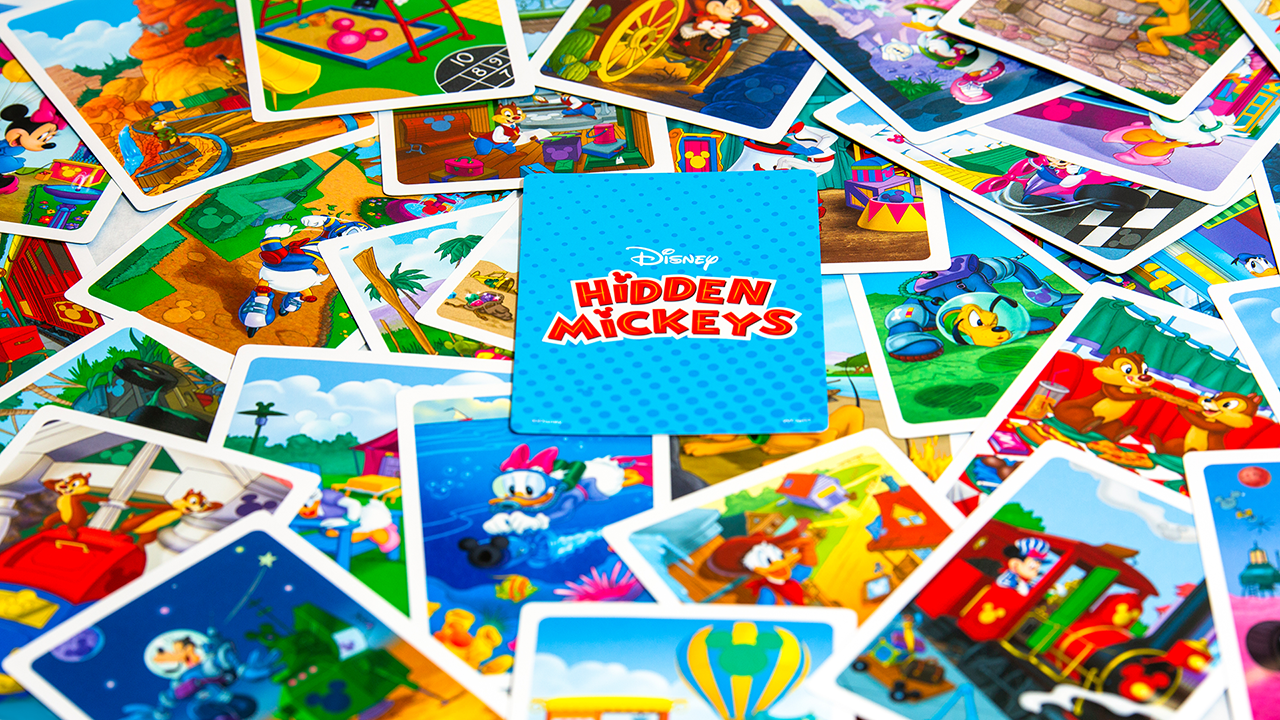 Disney Hidden Mickeys is a preschooler-friendly tabletop game from Funko Games, the company behind other Disney-themed titles like Toy Story Talent Show and Disney Princess See the Story.

We had the chance to try it out.

Disney Hidden Mickeys is a tabletop game for 2-6 players aged 3+. The game is inspired by the “hidden Mickey” concept that’s popular in the Disney universe, as fans can find “hidden” images of Mickey Mouse’s head around Disney’s theme parks, in Disney’s animated films, and so on.

The Disney Hidden Mickeys tabletop game combines the idea of finding hidden Mickeys in artwork with fast-paced gameplay that will have players racing around their play area to collect special Mickey Markers.

Before starting the game, families will place six large, colorful Mickey Markers somewhere in their play space. Rather than hiding these items, they should be clearly visible, and all players should try to remember exactly where each Mickey Marker was placed, as well as the color of each one.

In addition to these Mickey Markers, the game features Scene Cards, Surprise Cards, and colorful Mickey Cards, which are shuffled and placed in a draw pile in the center of the table. Scene Cards contain adorable pictures of Minnie Mouse, Goofy, Donald, Daisy, Pluto, or Chip and Dale. Each one of these Scene Cards features 4-7 hidden Mickey images, which will serve as “points” at the end of the game.

Finally, before starting the game, the youngest player is given the game’s Finder Token, which is shaped like a Mickey Mouse magnifying glass. This Finder Token will move between players as the game progresses.

Once the game begins, players take turns drawing cards from the draw pile. If players draw a Scene Card, they place it in the discard pile and their turn ends. If they draw a Surprise Card (which contains Mickey-shaped fireworks and a number), they place the card in front of them on the table and their turn ends. Finally, if they draw a colorful Mickey Card, the player with the Finder Token is challenged to race to the location where the matching Mickey Marker is located and bring it back to the table. For instance, if the red Mickey Card was drawn, they’ll need to find and collect the red Mickey Marker.

The game limits the amount of time players have to find the Mickey Marker with a sand timer. This sand timer runs out after only 15 seconds, so players will need to move fast to ensure they can collect the required Marker and make it back to the table before time runs out.

When a player successfully collects a Mickey Marker, they’ll be able to collect the top Scene Card from the discard pile and place it in front of them on the table. [The game also includes an optional “Memory Challenge” that changes this rule to allow players to choose the card they want from the discard pile before the sand timer runs out. The idea with this rule change is that players are challenged to remember which card(s) have the most hidden Mickeys and find one of these high-scoring cards to boost their score at the end of the game.]

This turn-based play continues until all of the Mickey Markers have been collected. At that point, players count the number of hidden Mickeys on the Scene Cards they collected (as well as any points they earned by collecting Surprise Cards). The player with the most points wins the game.

Disney Hidden Mickeys has a really fun concept, even though the game is incredibly simple. Since the game’s main “action” focuses on collecting the Mickey Markers, the game goes by really quickly and may not appeal to older players who want more to do. At the same time, this simple setup is great for younger players, as it can help them practice their memory, color recognition, and counting skills while also allowing them to burn some energy by running around the house or play area.

There are a few things. First, Disney Hidden Mickeys is highly customizable. That is, you can increase or lower the game’s difficulty by placing the Mickey Markers over a larger or smaller play area.

For instance, if you’re in a two-story house, you can make the game more challenging by placing Mickey Markers on different floors, rather than having them all in a single room or floor. You could even play the game outdoors -- for instance, while camping or while in the backyard (the Mickey Markers are made of plastic, rather than cardboard or cardstock, so we assume they’ll hold up well over time).

Next, there’s no “legend” or “answer sheet” that shows where all of the hidden Mickeys are on each of the game’s Scene Cards. While each card contains 4-7 hidden Mickeys, you’ll be on your own to find them. When you’re counting your points at the end of the game, you may want to have someone else double check your count to make sure you didn’t miss any hidden Mickeys on your cards, and to ensure you didn’t count something that actually wasn’t a hidden Mickey.

Finally, parents should know that Disney Hidden Mickeys carries Funko Games’ “Babysitter Approved” seal, which is placed on games that are easy to learn and put away when game time is over. Disney Hidden Mickeys has very few components, and the rule sheet is also printed on the underside of the box’s lid so you’ll always know how to play (so long as you have the box), even if the physical instruction sheet is lost or damaged.

Disney Hidden Mickeys is a cute, kid-friendly game that even the youngest players can enjoy. Plus, it can be used to get littles (and adults) off of the couch for a short time, if that’s a concern for your family.

While the game may be too simple for older players or those looking for a more complex experience, this is a great game for youngsters and those who aren’t quite ready for more complicated games.

Disney Hidden Mickeys is now available for $14.99. It has an expected play time of 20 minutes.