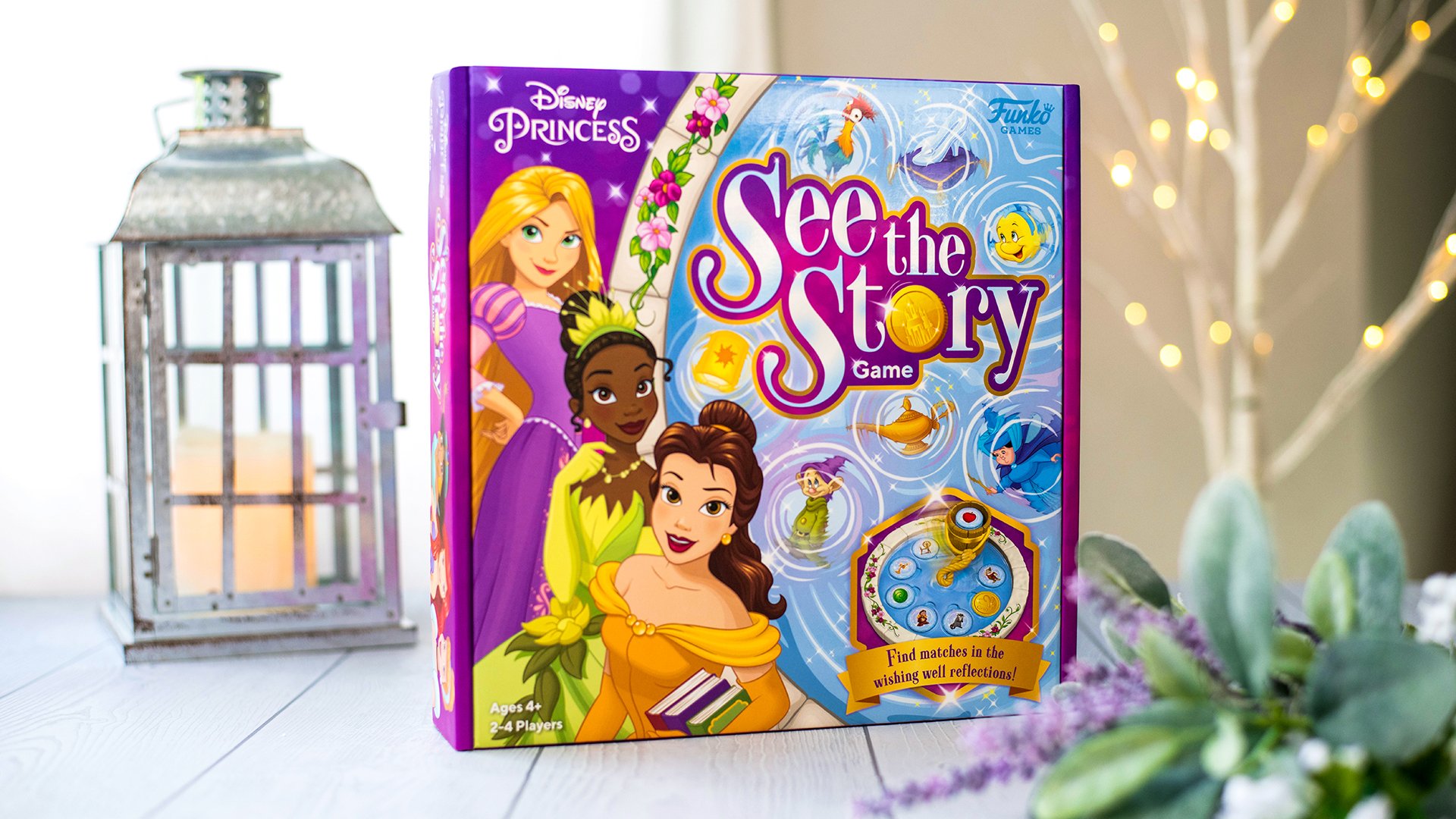 Disney Princess See the Story is a new tabletop game from Funko Games, the company behind titles like Funkoverse and Something Wild. We had the chance to check it out.

What is Disney Princess See the Story?

Disney Princess See the Story is a kid-friendly tabletop game designed for 2-4 players aged 4+. It challenges players to match images from 12 animated Disney films (each one associated with a different Disney Princess) to collect coins that they can place on their Disney Princess board, which is similar to a Bingo board.

Disney Princess See the Story features a clever wishing well game board that has an attached bucket that players can move around the surface of the board on each turn. The wishing well has seven indentations that can hold coins, and the bucket itself is bottomless, so that coins can fall from the bucket into these slots as the bucket is moved around the board.

At the beginning of the game, players fill the bucket nearly to the top with coins representing objects from Disney’s animated films (like the rose from Beauty and the Beast, Pascal from Tangled, and many others). Then, the first player moves the bucket in a complete circle around the wishing well game board to fill the seven indentations in the well with seven different coins.

If the match is correct, they can take one of the two coins from the well and place it on their personal Disney Princess board, which features 16 images of Disney Princesses (some Princesses are featured more than once on each board). They need to place the coin on top of the Princess from the same film. In our above example, the player may take the Sebastian coin and place it on the image of Ariel. The other coin (in this case, Flounder) is placed back in the bucket on the well.

If players don’t have a spot on their board that matches the Disney Princess they need, they can cover any spot on their board. The goal is to be the first player to create a “Bingo” -- a complete line of four coins in a row going vertically, horizontally, or diagonally.

If a player picks two images that don’t match, every other player can take a coin from the well and place it on an image of the matching Princess on their board (if there’s an open spot available).

There are 30 double-sided coins in Disney Princess See the Story, for a total of 60 different images (five images are associated with each Princess). The game also comes with six golden coins that serve as “wilds” when they’re collected. That is, kids can place them on any Disney Princess on their board. The 36 coins are made of cardboard, and they’re designed to be inserted into plastic rings, which makes them sturdier and simply look prettier (the rings have a glittery design).

Since there are so many images and only seven slots in the wishing well, it’s possible all seven images may relate to different Princesses. When this happens, the player that last moved the bucket gets to collect a coin of their choice and place it on their board to keep the game going.

In our experience, the bucket mechanic works pretty well, but we did run into a few instances where a coin would fall into a slot that already had a coin in it, or when a coin wouldn’t fall from the bucket at all, even if there was an empty slot under it. For the most part though, this can be quickly fixed by running the bucket over the indentation a couple of times until the coin falls out.

Disney Princess See the Story requires players to have at least a basic familiarity with 12 different movies (The Little Mermaid, Sleeping Beauty, Beauty and the Beast, Cinderella, Aladdin, Brave, Moana, Mulan, Pocahontas, Tangled, Snow White, and The Princess and the Frog). If players aren’t familiar with one of these films, they may have trouble picking out images that match.

If players have trouble identifying one of the images, the game’s instruction sheet includes a full chart showing all 12 Princesses and the five images that go with each one. Your family can reference this sheet at any time if you’re stuck identifying a particular coin.

In addition, Disney Princess See the Story is easily customizable. For instance, while the standard rules say all players need to race to find matching images at the same time (which is a high energy setup), the game includes suggestions for a “Gentler Game” as well. These rules switch things up slightly by having only one player search for matches at a time, and removing the penalty for an incorrect guess.

Finally, Disney Princess See the Story comes with Funko Games’ “Babysitter Approved” label, meaning the game was designed to be easy to learn and easy to put away. This label fits, since the game doesn’t have a ton of pieces (you can store all of the coins in the included zip-top bags), and there’s no assembly required after you insert the cardboard coins into the plastic rings the first time.

Disney Princess See the Story is a fun game with a clever design that will test kids’ object recognition and memory. However, your family’s experience with the game will be greatly impacted by how familiar (or not) you are with the 12 films that are represented on the coins.

If your family loves all things Disney, this is an easy recommendation, but if you’re not familiar with a few of these films, you may want to watch them first before trying this one out.

Disney Princess See the Story is now available for $19.99. Each game has an expected run time of 20 minutes.