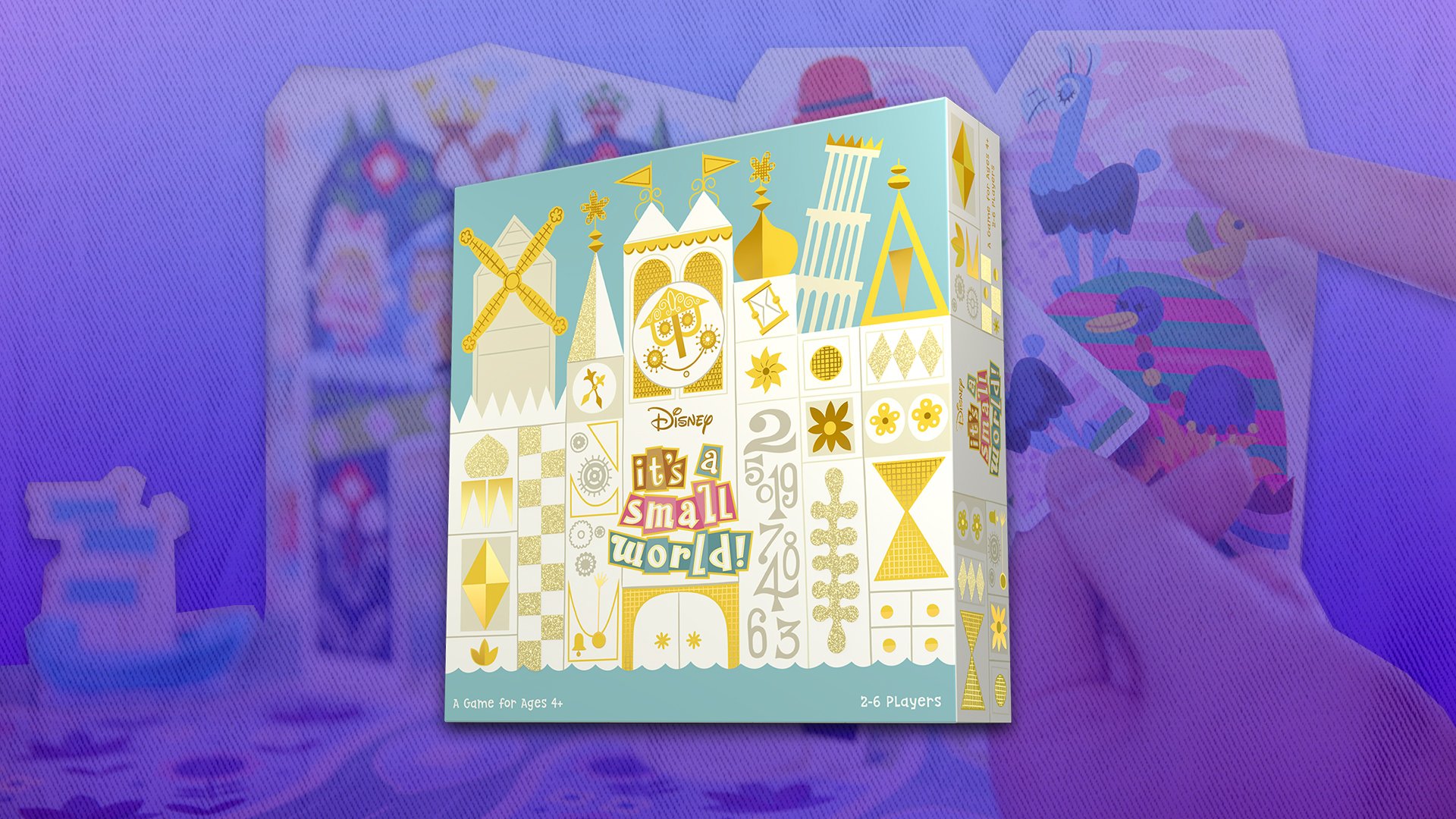 It’s a Small World opened at Disneyland in 1966. The classic boat ride features animated dolls representing different cultures and countries, and it features an incredibly catchy song that you might be humming to yourself right now.

Funko Games has recreated the experience of the It’s a Small World attraction in its new tabletop game of the same name. We had the chance to check it out.

Funko Games’ It’s a Small World is a seek-and-find game for 2-6 players aged 4+ that challenges players to earn points by matching the images on small cards with pictures found in the attraction’s scenes.

The flat game board represents that watery path the ride’s boats take through the attraction, and it’s marked with images of boats and arrows that tell players which direction to move and how many cards to draw on each turn. The board is split into four triangular sections by four vertical, rotating scene boards that are placed into rotating stands. This setup splits the game (that is, the ride) into four different “rooms,” with two scene boards facing into each room. Each scene board contains four images of countries represented in the ride (two on each side of each board).

In addition to the game board, a sturdy card representing the ride’s clock tower can be placed inside a card tray that sits next to the board. When clock cards are pulled from the deck, the clock face is rotated one position clockwise. When the clock rotates five times (that is, when the number next to the clock reads “6”), the game ends and the player(s) who has matched the most cards wins.

There are only two boat figures to move around the board. If more than two people are playing, they’ll need to split into teams. Having an uneven number of players isn’t a problem, since the game’s rules aren’t affected and there’s no impactful advantage or disadvantage to having more or less people on a team, so long as you take your time when looking for matches.

Before starting the game, each player draws four cards, which contain bright, clear images of the children and animals featured in the ride’s show scenes. On each turn, players draw more cards, giving them more pictures to match. These cards are quite small, and can be placed inside card holders so they can be organized by country or type.

After drawing new card(s) for their turn, players will look at the cards in their possession and try to find matching images in the two scene boards facing their current room. If players find a match between one of their cards and a scene board, they place the card in their side of the card tray under the clock tower.

Finally, some cards allow players to rotate the scene boards so they can look at different characters and match even more cards.

Even though It’s a Small World is technically designed for preschoolers, players of many ages can enjoy the experience of moving around the colorful board and finding matches in the adorable artwork. There’s even a hint of strategy here, as players can look at the room(s) they’ll enter next, and use this information to decide the right time to rotate the scene boards.

It’s a Small World is also a customizable experience. While the standard rules say to play until the clock reaches “6,” you can change this to any limitation you want. For instance, you can play until one player / one team reaches 20 points (20 cards), or play a much shorter game that ends when the clock reaches “3” (this would be great when your family is short on time but you still want to play something that makes kids think).

We do have one minor nitpick with It’s a Small World. The game board is quite large, and you have to frequently rotate the entire board as boats move into different rooms. This large size (and the fact that the scene boards are double-sided) makes it difficult to see into the other rooms without once again moving the board or physically moving around the table. It’s much easier to temporarily rotate the boards to see the other sides and then move them back before deciding whether or not to play a rotation card. Again, this is a nitpick, rather than a huge problem, and it’s easily fixed.

The artwork in the It’s a Small World tabletop game is directly inspired by the ride, and therefore contains some cultural stereotypes that are also featured in the ride itself (like a young boy riding on a flying carpet). If this is a concern for your family, you can remove the cards containing these characters from the deck so they’re never featured during gameplay.

It’s a Small World is an adorable tabletop game with straightforward gameplay that players both young and old can quickly understand and enjoy. While the experience is very simple, it also offers nice replayability, as you can place the scene boards in different spots before each game so the rooms feel fresh each time your family plays.

Whether your family is a fan of all things Disney or you just have littles who enjoy picture matching games, we recommend checking this one out.

It’s a Small World is now available on the Shop Disney website for $29.99. It will be released on Amazon on July 1.