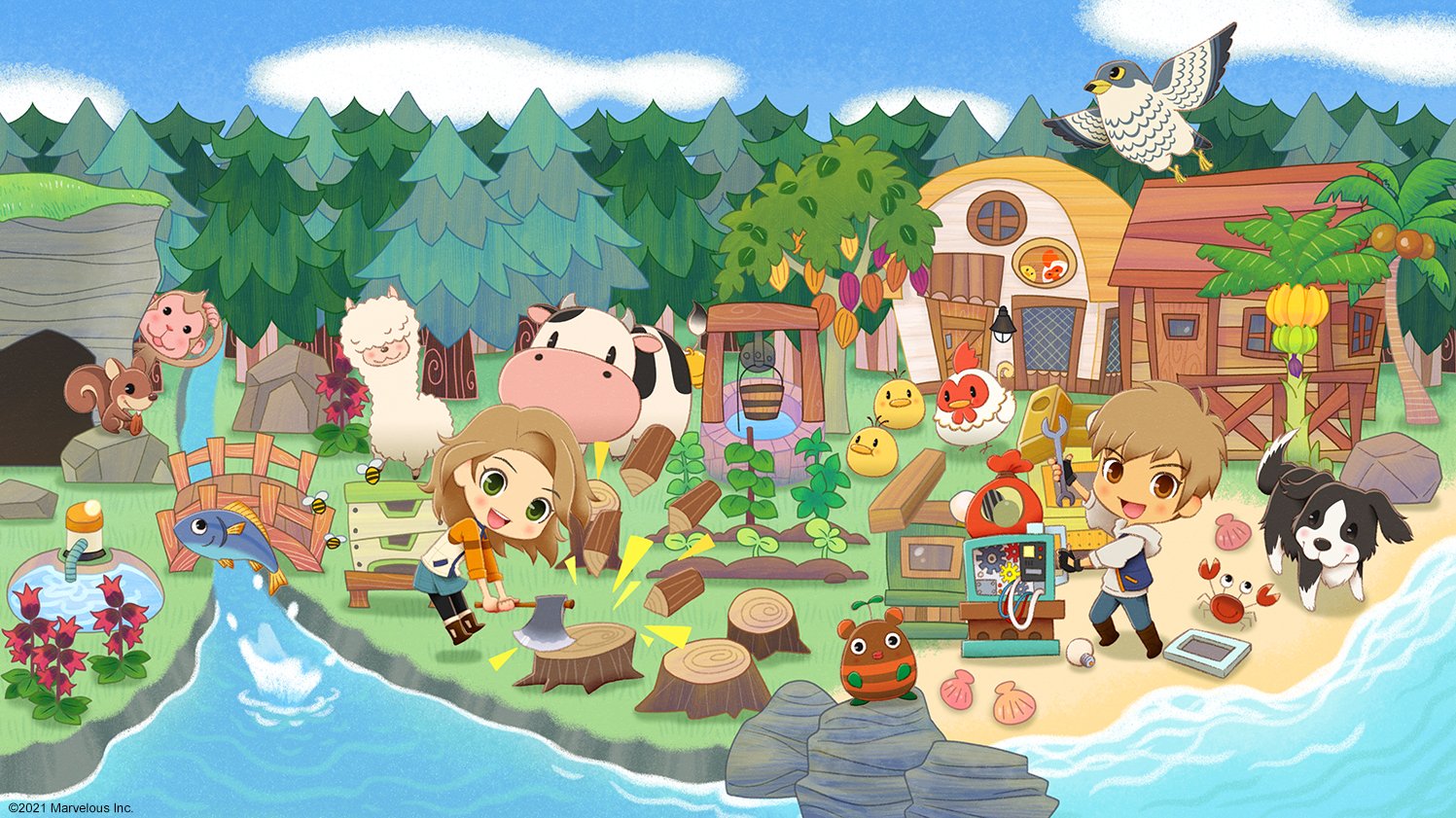 This series began as “Harvest Moon” before undergoing a name change to ”Story of Seasons.” While the Story of Seasons series is developed by Marvelous, the current Harvest Moon franchise is created by a different company, Natsume.

Story of Seasons: Pioneers of Olive Town is now available on Nintendo Switch. We had the chance to check it out.

Editor's Note: This article contains some story and gameplay spoilers.

What’s Story of Seasons: Pioneers of Olive Town about?

In Story of Seasons: Pioneers of Olive Town, players inherit their grandfather’s farm near a small seaside community called Olive Town. The farm is overgrown with plants, trees, and debris, so players will need to clear the rubble to create a thriving farm full of crops, animals, and more. At the same time, players will be asked to help Olive Town grow into a popular tourist destination.

Similar to other farming simulation games (like Stardew Valley), players can grow crops, raise animals, go mining for resources, craft items, and much more. When they first start the game, they'll be able to customize the look of their character and choose to play as a boy or a girl.

Pioneers of Olive Town has a day and night system, with an in-game clock that progresses much faster than real time. Players have a limited amount of stamina to spend on each in-game day, with activities like plowing fields, breaking rocks, and chopping trees (as a few examples) draining some of that stamina with each action. Players can take a bath or eat a meal to restore a bit of their stamina, giving them the ability to perform more actions before heading to bed.

While the game progresses one day at a time, the year doesn’t last for 365 days. Instead, there are four, 28 days seasons to experience each year (Spring, Summer, Autumn, and Winter).

Pioneers of Olive Town has lots of activities to participate in (mining, cooking, fishing, crafting, and so on), but the full selection of in-game content isn’t available at the beginning. Instead, it’s rolled out over time, allowing players to pick up the basics and then learn about new features as they’re unlocked.

For instance, when players first begin the game, they won’t be able to raise animals until they repair the dilapidated chicken coop on their farm by collecting the necessary materials.

Similarly, while the player’s farm consists of three large, open areas, only the first area is accessible at first. The second and third areas are locked behind a broken bridge and a pile of debris (respectively) that players will need to deal with before they can access these areas.

Each area on the farm has different species of trees to cut down and grasses to collect. Plus, there are three mines to explore, with each mine having a greater variety of resources available to collect than the last.

Altogether, there are dozens of different resources available for players to collect (including different types of flowers and crops). These items can be sold for a quick profit, used in crafting recipes, or placed inside a wide variety of “Makers” (think machines) in order to transform them into something else. For instance, players can turn milk into butter, yogurt, and cheese, while wool can become yarn (and eventually cloth), and so on.

With so many resources available to collect and things available to do each day, players have the freedom to prioritize certain activities over others, and/or to specialize in a certain kind of resource as a way to make the most money.

Over time, players can upgrade their inventory to hold more items at once, upgrade their tools (like their axe and hammer) to make them more efficient, and upgrade their home to hold more objects (this also allows them to adopt multiple pets). Players also have a list of 12 “skills” that they’ll automatically develop as they interact with the game’s different features. As players grow these skills (like Logging, Reaping, and Animal Care, as a few examples), they’ll unlock passive bonuses that can improve their overall experience.

Outside of the farm, players can visit a number of homes and shops in Olive Town, like an Animal Shop where they can purchase pets and mounts, a General Store that sells seeds, fruit trees, and other merchandise, and more. There’s even a Museum where players can donate the fish they catch and appraise any rare treasures they may discover while playing.

Players also have an in-game camera that allows them to take pictures almost anywhere. Players can donate pictures of animals like foxes and birds to the museum to help its exhibits grow, but they can unfortunately only have 10 pictures saved at the same time (this limit should be much larger).

Players can also befriend a number of townspeople and build relationships with each one (this includes the ability to get married and have a child), as well as participate in special festivals throughout the in-game year. They’ll also receive requests from Olive Town’s Mayor and other characters that can be completed in order to push the main story forward.

Finally, the game features adorable, magical critters called “sprites,” which players will be able to discover and befriend as they grow their farm. These sprites (and another magical character that we won’t spoil here) allow players to travel to special locations where they can play mini-games, as well as access special farms where the seasons never change. Sprites will also collect free resources for players that they can collect each day.

Does this game have any issues players should know about?

Overall, we’ve very much enjoyed our time with Story of Seasons: Pioneers of Olive Town. That being said, the game could become even better if a few problems were addressed.

For instance, there are no elevators or mine carts in the mines, so you need to start from the first floor each time you enter. The bottom levels of the third mine are also hard to navigate due to some overly aggressive enemies that really need to be toned down. (These enemies are like moles that pop up out of the ground. If you’re standing too close to them when they appear, they’ll drain a bit of your stamina.)

Elsewhere, there’s a limit to the number of items you can sell each day. Once your farm becomes a bustling operation, it’s possible you’ll have more objects to sell each day than spaces to sell them.

In addition to these gameplay issues, as our farm grew in size, we experienced lots of gameplay lag (this means the graphics would stutter, as though the game is having trouble loading everything at once).

According to Nintendo Life, Marvelous has plans to fix some of the game’s issues, so it’s possible all of these problems may be worked out in future updates. However, that’s not guaranteed.

Like other farming simulation games, when it’s time to stop playing Pioneers of Olive Town, it’s easy to say “just one more day” and keep going instead. As we said in our review of Harvest Moon: One World, this may be a problem for kids and other players who may have trouble self-regulating their screen time. Parents may want to use the Switch’s parental control features to manage their family’s play time.

While there are ways Story of Seasons: Pioneers of Olive Town can be improved, as the game currently stands, it’s still a delightful experience. The game is adorable (just look at the cows!), the soundtrack is catchy, and it’s simply fun to play. We definitely recommend checking this one out.

Story of Seasons: Pioneers of Olive Town is available now on Switch for $49.99. The game is rated E for Everyone by the ESRB.