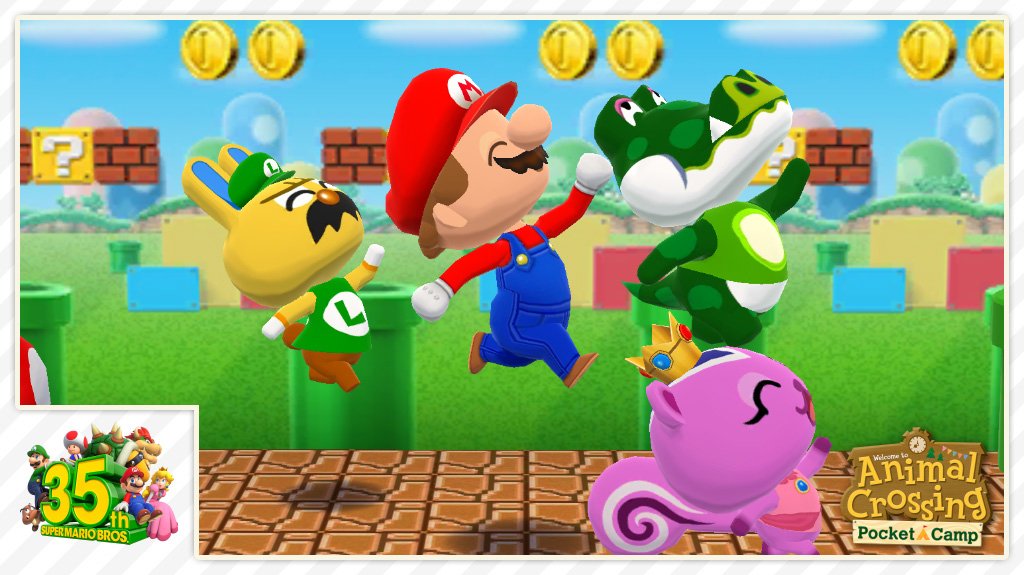 At the beginning of March, a slew of Super Mario-themed items were added to Animal Crossing: New Horizons on Switch, allowing players to bring a touch of the Mushroom Kingdom to their tropical islands.

Not to be left out, Animal Crossing: Pocket Camp has also launched its own Super Mario-themed crossover event, which brings Mario-themed items to the campsite.

As part of this event, players will receive a free “Mario’s Hat Cushion” item in their in-game mailbox if they login to Animal Crossing: Pocket Camp between now and March 23 at 10:59 p.m. PT.

In addition, the game’s Super Mario item collection and Super Mario Wall & Floor Collection have been reissued, giving players another chance to collect these items. The Super Mario-themed wallpaper and flooring items cost premium currency, while many of the Super Mario-themed decorations and clothing items (like the Fire Bar, Cheep Chomp Balloon, and Peach’s Dress, among many others) can be purchased with Bells and other crafting ingredients. These items will be available to craft for the next 15 days.

Finally, a new “Mario Jump” pose has been added to the game’s camera menu. You can use it when taking in-game snapshots of yourself and your animal friends for the next 15 days.

Are you excited about this Super Mario crossover event in Animal Crossing: Pocket Camp? Let us know on Twitter at @superparenthq.