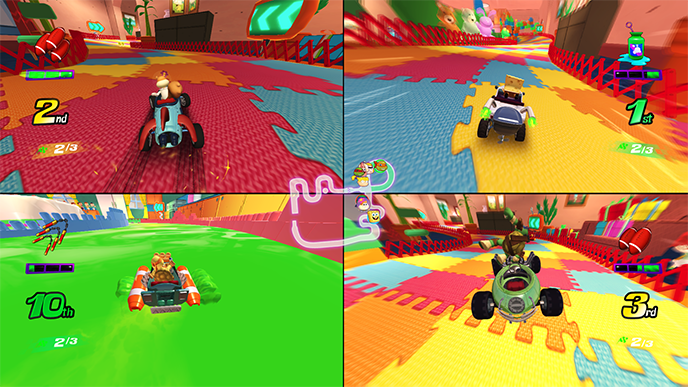 Mario Kart 8 Deluxe is a great kart racing game for kids and families, starring tons of popular characters from the Nintendo universe. The game has been out for a while now, though, so if you’re looking for a different family-friendly kart racing game to enjoy this fall, Nickelodeon Kart Racers may scratch that itch.

The upcoming kart racing game will let players race as characters from popular Nickelodeon television shows, including SpongeBob SquarePants, Teenage Mutant Ninja Turtles, Rugrats, Hey Arnold, and others. The game will include 24 colorful, slime-themed tracks. With so many classic shows thrown into the mix, the game should offer a hit of nostalgia for parents who grew up with them.

Rated E for Everyone, the game is being designed specifically for group play, with local multiplayer and battle modes for up to four players. Players can compete to win cups as well as upgrades for their in-game vehicles.

Nickelodeon Kart Racers will be released on PlayStation 4, Xbox One, and Switch on October 23. If you’re looking for even more kart racing games to play in the meantime, take a look at our list of kart racers you should check out.