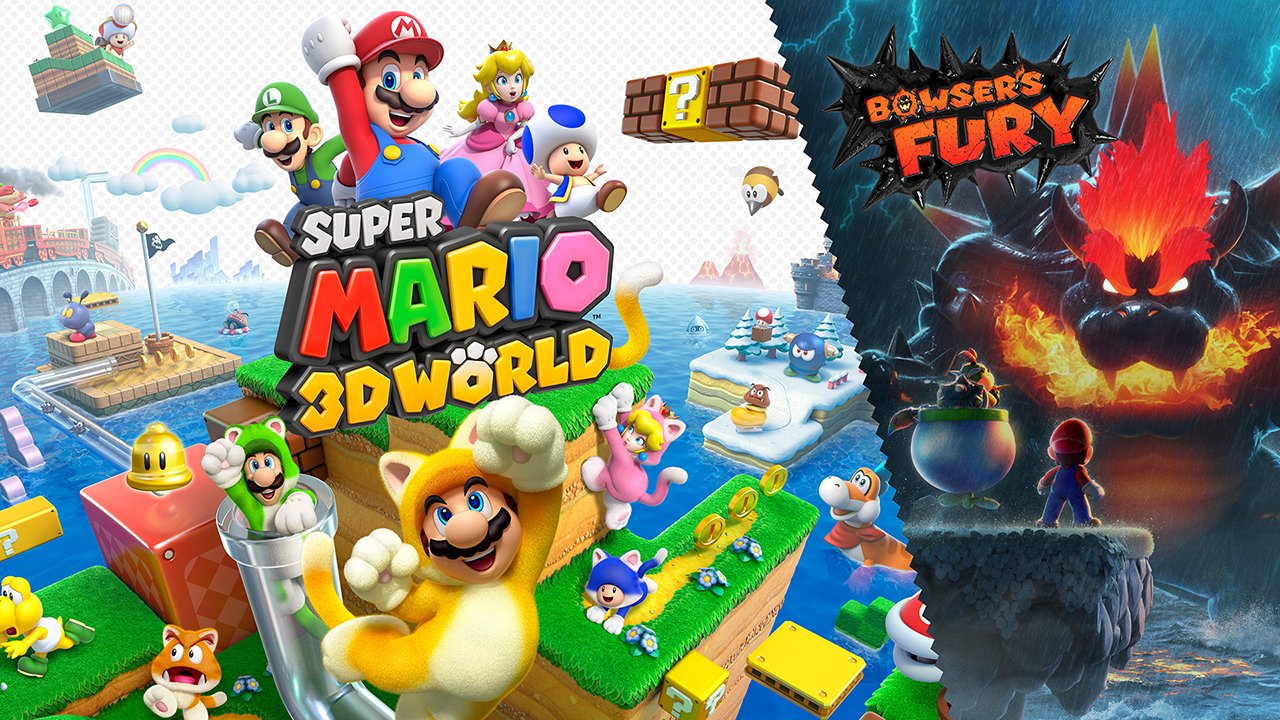 In November 2013, Super Mario 3D World was released on Nintendo’s Wii U console. Now, the game has been re-released on Switch with new content in a mode called “Bowser’s Fury.”

We had the chance to check out this updated version of the game.

In the Bowser’s Fury add-on, Bowser has become huge and is going on a rampage. Bowser Jr. begs Mario to help him calm Bowser down, so you’ll need to help the pair activate lighthouses to turn Bowser back to normal.

These modes are separate experiences, and you can choose which one to play from the game’s main menu.

How do you play Super Mario 3D World?

Super Mario 3D World is a level-based platforming game for up to four players. Players can choose to be Mario, Luigi, Peach, or Toad, with each character having a different specialty when it comes to running or jumping. For instance, Peach can hover for short distances after she jumps, which can make it easier to cross long gaps. While these four characters are available at the beginning, a fifth playable character, Rosalina, can be unlocked by playing the game.

Similar to classic Super Mario Bros. games, levels in Super Mario 3D World are split into multiple worlds. Each course has a different theme, and you’ll have a limited amount of time to complete it. This time limit encourages players to always keep moving in a level, but it’s lenient enough to give you some time to explore.

The courses here are highly varied and super colorful (the graphics are just great). As you might expect, some courses are more difficult to complete than others. Some may focus heavily on jumping across lots of different platforms or gaps in the path, while others may be filled with lots of enemies to avoid or defeat, and so on.

Most levels contain three Green Stars and a collectible stamp for you to find, with some of these items being better hidden than others. If you miss any of these items, you can replay stages to find them later on, but it’s worth noting that you’ll need to collect the required number of Green Stars to unlock some areas and keep moving forward. (Stamps, meanwhile, can be used in the game’s Snapshot mode to decorate in-game screenshots that you can share with others.)

Like other Mario games, Super Mario 3D World allows you to collect lots of power-ups to help you on your adventure. For instance, the Fire Flower gives you the ability to shoot fireballs at enemies, while the Super Star grants you temporary invincibility, and so on. There’s even a Super Bell power-up that causes Mario and his friends to dress up like adorable cats, and allows them to swipe their “claws” at enemies and climb walls (some areas -- and collectibles -- are only accessible when you’re in the cat suit).

In addition to normal stages, you’ll need to take on a boss at the end of each world to free one of the Sprixies. The world map is also filled with bonus areas, like mini boss battles that give you a chance to earn extra Green Stars and rooms where you can collect some free power-ups (you can hold onto an extra power-up as you play and activate it if/when you need it).

There are even bonus stages that ask you to help Captain Toad collect Green Stars by navigating small puzzle environments (you can learn more about this “Captain Toad” style of gameplay in our review of Captain Toad: Treasure Tracker on Switch).

What about the Bowser's Fury add-on? How do you play it?

While Super Mario 3D World features level-based gameplay, the Bowser’s Fury add-on changes things up by taking players to Lake Lapcat, an open-world area that’s themed after cats. Here, you’ll need to explore groups of islands, perform lots of platforming, and even solve some puzzles to collect tokens called Cat Shines with the goal of activating lighthouses and clearing a nasty black goop from the area in order to calm Bowser down.

Mario is accompanied by Bowser Jr, who can help players by collecting coins, defeating nearby enemies, and so on. You can choose how much assistance you want from Bowser Jr. in the game’s Options menu (you can choose a little, a lot, or none at all).

As you make your way around Lake Lapcat, Bowser will sometimes become even more enraged and attack, so you’ll need to watch out for fireballs falling from the sky and more (these “enraged” moments only last a short time).

Finally, once you collect enough Cat Shines, you’ll be able to activate a Giga Bell power-up that causes Mario to become super-sized so you can attack Bowser head-on.

While Super Mario 3D World can be played by up to four players, Bowser’s Fury is for only 1-2 people (one player controls Mario while the other controls Bowser Jr.). The add-on also supports the game’s Snapshot mode.

Super Mario 3D World was super fun when it was released on Wii U, and it’s still great fun now. While the game can definitely be enjoyed by a single player, it really shines when playing cooperatively (whether you’re playing with others in the same room or online). This is partially due to the fact that “deaths” are handled in such a friendly way when playing cooperatively.

When you’re playing on your own and you “die” (for instance, by falling into a pit or taking too many hits), you’ll lose a life and will need to try again from the beginning of the current level or the last checkpoint you activated. When playing cooperatively, if someone “dies,” they’ll simply reappear in the stage and you can keep going.

If everyone “dies” at the same time, the group still loses a life, but this overall setup makes the game easier and much more approachable for younger players or those who may not have as much experience with Mario-style platformers.

The Bowser’s Fury add-on is also great fun whether you're playing on your own or with a friend (in fact, we enjoy this mode even more than the base game). Playing with two people is a fun, cooperative experience that encourages players to communicate in order to best utilize Bowser Jr.’s abilities. For instance, Bowser Jr.’s clown car allows him to fly into the air where he can take out enemies that Mario may have difficulty reaching on his own.

Super Mario 3D World + Bowser’s Fury is a charming and entertaining platformer that becomes even better when playing with friends and family. The cooperative modes are great for younger kids and less experienced players, and the Bowser’s Fury add-on is so much fun that we would love to see it turned into an even larger experience.

We definitely recommend adding this one to your family’s Switch collection.

Super Mario 3D World + Bowser’s Fury is now available on Switch for $59.99. The game is rated E for Everyone by the ESRB.